Home Motocross MXGP Successful shake down for Watson in Sardinia 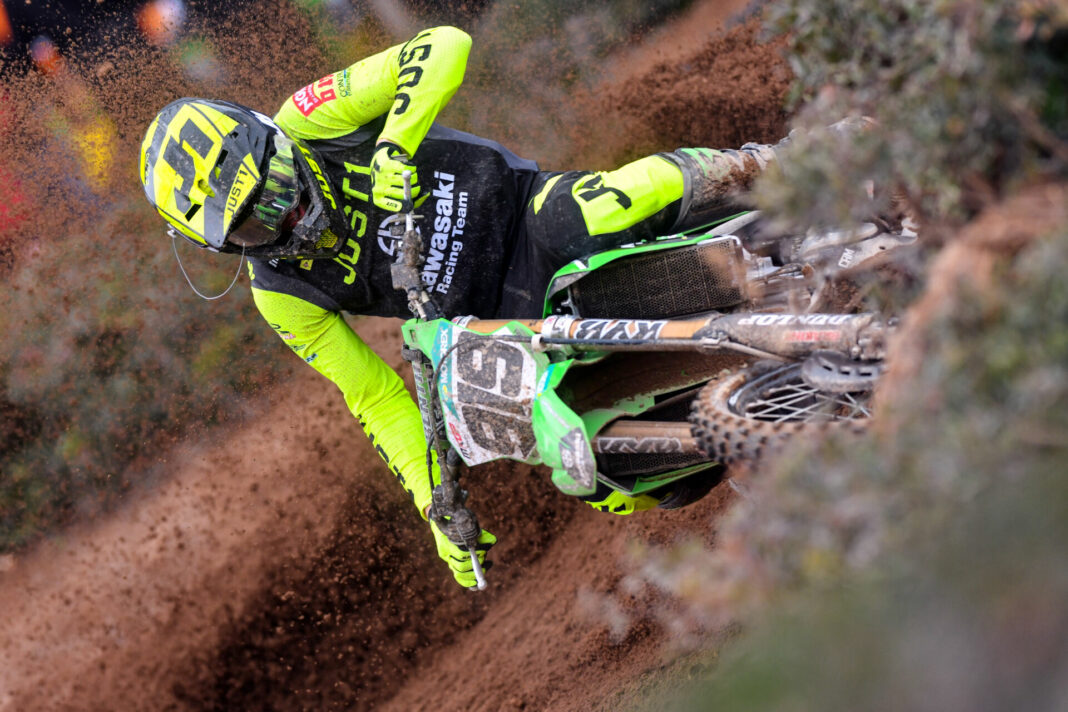 Ben Watson started his Kawasaki Racing Team MXGP career with a solid fourth place in the opening race of the European motocross season at the tortuous Alghero facility in Sardinia.

The KRT team had travelled to the Mediterranean island to continue their early-season preparation and took the opportunity to offer the Englishman his first taste of race action on the KX450-SR. A solid start in the Super Final saw him holding down sixth place on the opening lap and, quickly advancing to fifth on lap three, he posted lap times faster than the leaders as he closed down the rider ahead of him. He moved into fourth just before half-distance but, with the front three out-of-sight and no championship points at stake, he sensibly took no risks and simply relished the opportunity to get in useful bike-time on his new mount. Earlier in the day the young Brit had fallen victim to the always hectic tight opening turn at the scenic track overlooking the magnificent coastline. Maintaining his composure he rejoined the race and had already advanced through the backmarkers to twelfth at the completion of the first lap. Three laps later he was seventh but time lost negotiating other riders inevitably meant that the rest of the leaderboard was more than ten seconds into the distance; settling into a good rhythm and posting solid lap times he finished just three seconds shy of the top-six.

The Kawasaki Racing Team and Watson will continue their early-season race preparation next weekend at Lacapelle Marival in central France; the opening round of the FIM MXGP Motocross World Championship is programmed for Matterley Basin in southern England in February 19/20.

“I wouldn’t say it was a good weekend but the first race is now in the book.” Said Ben. “We came here mainly for getting into the rhythm of racing on the new bike and learning as much as we can to prepare for the MXGP season. The first race I had a lot of arm pump and couldn’t ride how I wanted to; I had a crash at the start of the race and it was not easy to come from the back, especially here at Alghero as the track is pretty narrow.”

“The Super Final was a lot better, I took a good start and was able to ride how I want to. I finished fourth and learnt several things about the bike. It has been a short off-season and I’m not yet 100% used to the bike so it’s useful to do a couple of races before the GP season, when you are behind the gate it’s a very different feeling to training.”

“I need to get more and more gate-time, a change of bike always demands a new technique for the start. After what we learnt this weekend we’ll make a few adjustments before the next race at Lacapelle next Sunday.”

Antti Pyrhonen (KRT team manager): “The first pre-season race is done; it’s always important to do a couple of races before the first GP. Ben had a tough start in the first race when he crashed at the start turn but then he rode a solid race to finish seventh. His second start was good; he had a strong moto and a fourth position is a good start after the winter. We always learn something in these pre-season races, and we’ll keep working as we have two further training races before the opening MXGP in UK.”