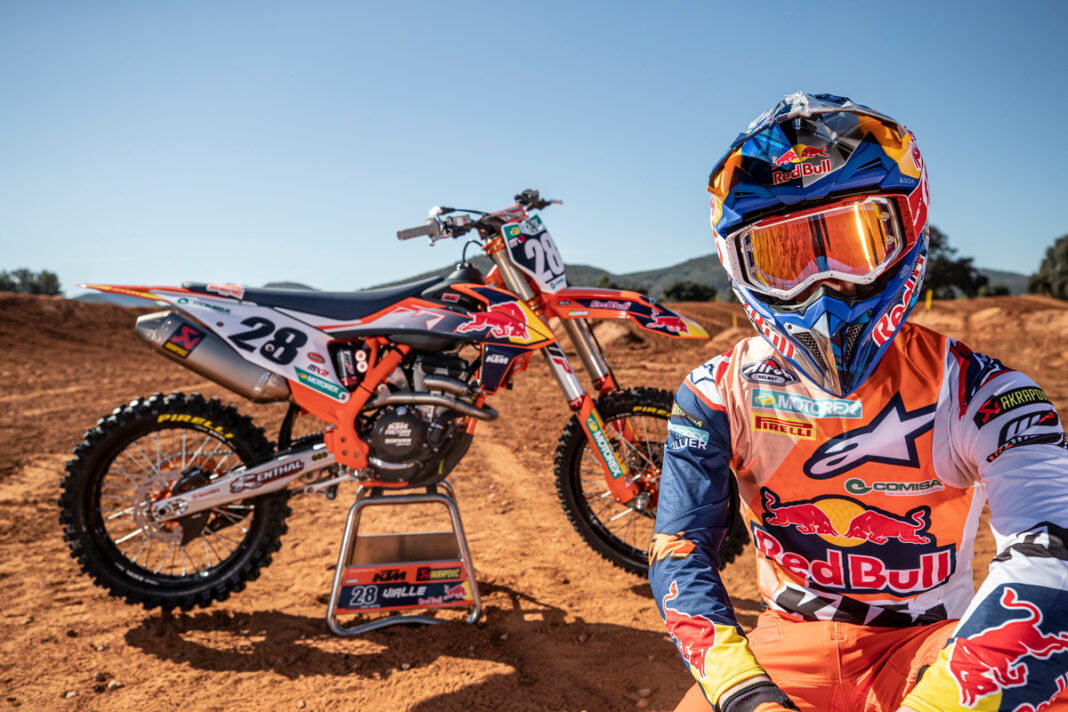 The FIM World Championship is due to start this June 13 in Russia, with the Red Bull KTM team riders of Tom Vialle, Rene Hofer and Mattia Guadagnini lining up in a stacked MX2 class for the season opener.

The 20 year old frenchman Tom Vialle, became the thirteen gold number plate claimer for Red Bull KTM during his second season with the team on board his SXF250, and also the ninth MX2 World champion for the brand. Heading into the 2021 season, Tom is aiming for a double back to back world title which will make him the first since 2009.

Tom talks through the 2020 season below.

Even though society was very much in the grip of the pandemic, how was the winter as World Champion?

To become world champion felt like the best thing ever and it really sunk in during a month of holidays where I just stayed in France to be with family and friends; which was really nice. I didn’t do so many interviews or much travelling because of COVID-19. There were a few things we missed like the traditional FIM Awards and the KTM Christmas party in Austria. It was a shame but at the same time it was a very easy and relaxed time before starting to train and think about 2021.

Yeah, for sure. The last part of the season was really difficult because it felt like a lot of races, but there was extra pressure because of the COVID situation around the championship. We were doing a lot of testing and I was trying to do things as safely as possible but mentally it was extra weight. It was a good battle with Jago and when he made a couple of mistakes in the middle of the season I kept really focused and did my best.

2020 must have shown how every mistake and every point counts: it was a close-run contest between the both of you up until the last few motos…

Yes, very much so. The goal was to be world champion and not to win every GP. I knew I had to learn to accept 2nd or 3rd on the podium, lose a couple of points but then focus to win or gain them back the next weekend. It was not easy! It was my first year fighting for the title and it was important not to over-think things. When we came to Lommel [the penultimate triple header] I was already thinking about the championship at this point and being careful to ride a bit more safely.

I want to keep #28 so that’s what it will be! For sure 2021 is a bit different, but then again I spent most of 2020 with the red plate so that kind of pressure is the same. Don’t forget that when you are riding you don’t see the red plate! Everybody wants to beat you, but I think I had some of that last year as well: I kinda like being in that position. In 2020 it was mainly me and Jago so it was difficult to take points from him and to feel a bit safe with the lead. It only happened when he started to make a few mistakes. I think in 2021 there will be a few other riders even if [Thomas Kjer] Olsen and [Ben] Watson moved to the 450s. We’ll see. It’ll be an interesting year but I believe Jago will be the first guy to beat.

You are leading the team again but with 2021 being your third year in MX2 is there even more work to do with development now?

Yeah, we have been working a lot with the KTM 250 SX-F and developing the race bike. I’ve actually been riding with our new engine recently, which will help us a lot in 2021. I feel good on the bike. With Rene [Hofer] we’ve been working through set-ups and made good progress.

Sure, we’ve been thinking about this a little bit because, like you said, if I win again this year then I’ll be on the 450. We have seen with Jorge, who was a double MX2 champion – even if he had a hard 2019 winter with his broken leg – that he was able to be quite fast and at the front in MXGP. Olsen looked good as well in his first pre-season races with the bigger bike. When you change the motorcycle then it is like a ‘reset’: it’s a new machine, new year, new category, new rivals so it brings new motivation, let’s say. I’m really focused to win this year and we’ll see for the next.