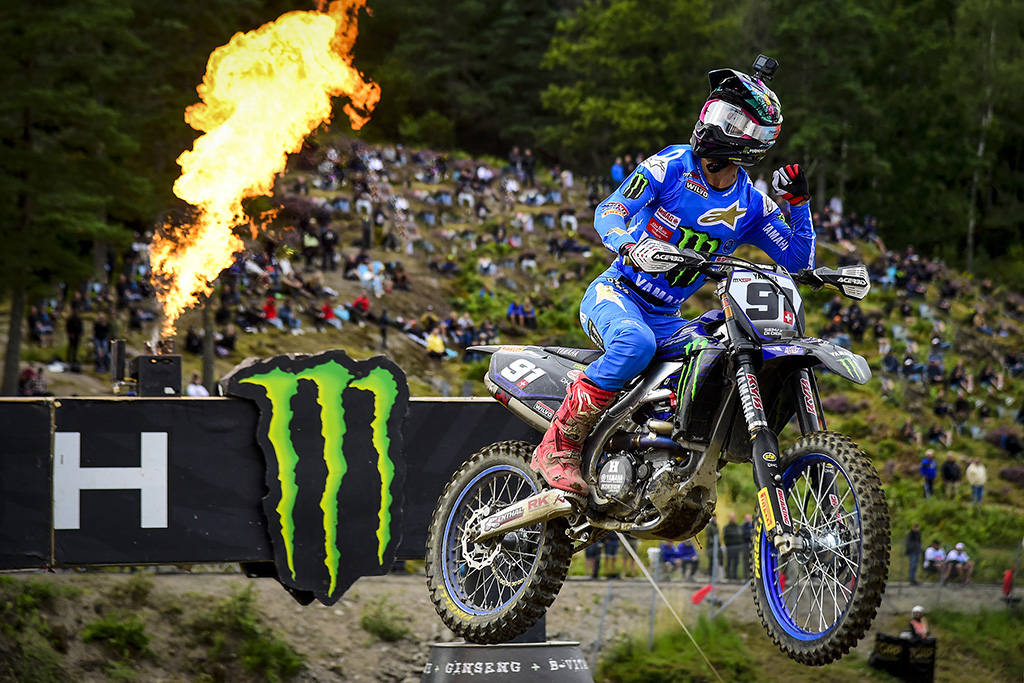 Monster Yamaha’s Jeremy Seewer dominated the MXGP of Sweden at Uddevalla, taking a win and a second to snatch the overall while HRC’s Tim Gajser got ever closer to another title.

In MXGP race one, Valentin Guillod of iXS Hostettler MXGP Team was the Fox Holeshot winner, but the Monster Energy Yamaha Factory Racing trio of Maxime Renaux, Jeremy Seewer and Glenn Coldenhoff were quick to pass the Swiss and take the first, second and third positions. Guillod dropped to fourth but was ahead of Team HRC’s Tim Gajser and Red Bull GasGas Factory Racing’s Jorge Prado.

Yesterday’s qualifying race winner Mitch Evans of Team HRC struggled in the first few laps of the race after crashing but managed to get going again and was making very strong progress throughout the race.

Renaux then began to come under strong pressure from his teammate Seewer who was trying everything to get by. Meanwhile, Guillod remained impressive in fifth after being passed by Gajser. Prado was looking to do the same, but the Swiss put up a strong fight for much of the race.

Further down the field, Evans was making strong moves towards the top 10, where he eventually finished after what was a strong effort from the Aussie.

After six laps, Prado was finally able to pass Guillod, as Renaux opened up the gap to 2.020 seconds over Seewer and Coldenhoff.

Gebben Van Venrooy Yamaha Racing’s Calvin Vlaanderen went out of the race after what looked like a mechanical issue.

Towards the latter stages of the race, we saw Seewer get back onto the rear wheel of Renaux, as Gajser attempted to get by Coldenhoff who was able to fend off the Slovenian.

In the end, it was a Yamaha 1-2-3 as Renaux took the win from Seewer and Coldenhoff as Gajser was forced to settle for fourth ahead of Prado. Meanwhile, Guillod crashed on the final lap and dropped from 6th to 9th.

In race two, the Fox Holeshot went to Seewer, his third of the season, who initially led Kawasaki Racing Team MXGP’s Romain Febvre, Vlaanderen, Evans, Gajser and Coldenhoff but before we even got to the end of the first lap, Gajser was able to make some quick passes to land himself in second place.

Renaux though had a big crash on one of the tabletops on the opening lap and did not carry on with the race. The Frenchman was able to walk away injury-free and it was confirmed that he is feeling banged up and bruised but nothing more serious.

Seewer was looking fast in the first two laps, as he set two consecutive fastest laps of the race as he opened a small margin of 1.599 seconds to Gajser, Febvre and Evans.

Evans was on a charge as he clocked the fastest lap of the race, a 1:50.808 as he began to close in on Febvre and Gajser. At that point, the top four were nicely bunched up together and it looked like we had an intense battle for the race win on our hands.

Though as the race went on, Seewer was looking more and more comfortable in first as Gajser was not looking to take any risks after a big crash in time practice on Saturday.

It looked like everyone began to settle into their pace, as not many passes were being made until Prado began to charge for Vlaanderen and ultimately passed the Yamaha rider for sixth.

In the end, Seewer secured his fourth race win of the season ahead of Gajser, Febvre, Evans and Coldenhoff! A 2-1 result gave Seewer his third GP victory of the season, while Gajser finished second and Coldenhoff made it back-to-back podiums in Sweden.

Heading into the 16th round of the series, Gajser holds 115 points lead over Seewer who remains second ahead of Prado who is third. Coldenhoff is just a further 18 points behind and has a chance to challenge the Spaniard for the bronze medal over the next three Grand Prix.

“Yeah, starting yesterday, I felt really good in time practice. And for some reason that went away in the qualifying race,” aaid Seewer.

“Of course, we don’t show everything in qualifying, but still, I didn’t get the feeling that I wanted. In the second race today, I took a good start, which made it easier, especially on a track that is hard to pass. I felt a bit quicker than Maxime in race one but couldn’t find my way around.

“Anyways, amazing weekend, I’m trying to collect more of those first place trophies… and try not to break them too.”