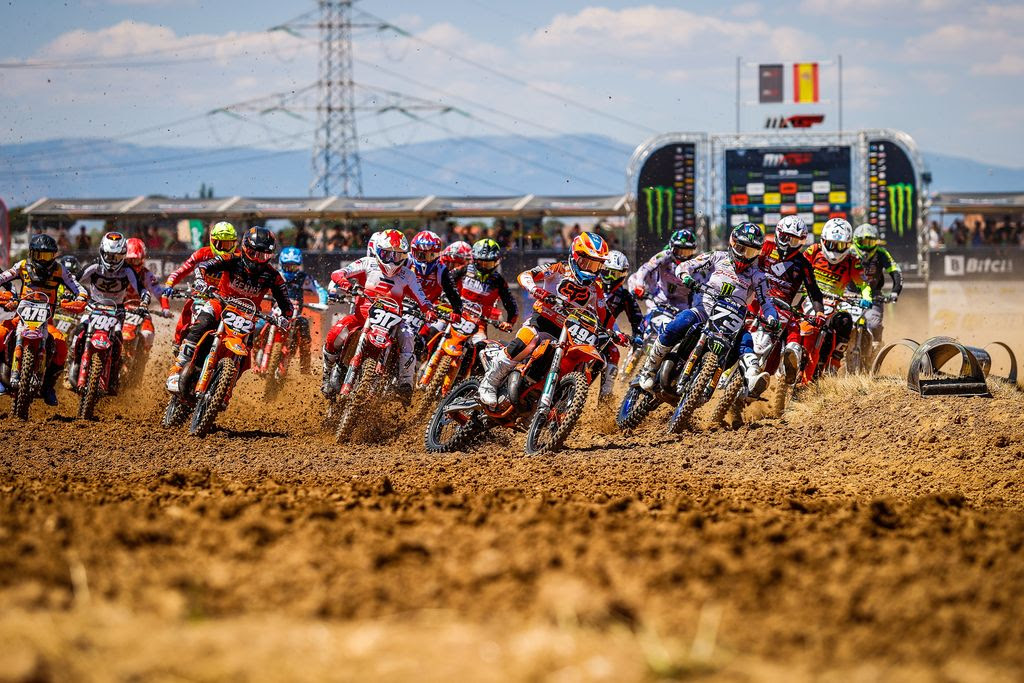 Arroyomolinos has concluded the fourth round of the EMX125 Presented by FMF Racing Championship, with Yamaha Europe EMX125 MJC’s Ivano Van Erp winning his first overall of the season, as series leader Cas Valk of Fantic Factory Team Maddii failed to reach the podium.

In the first EMX125 Presented by FMF Racing heat it was Maximilian Werner of KTM Kosak Team who was the leading rider out of the gate. Fantic Factory Team Maddii’s Cas Valk along with Alexis Fueri and Ferruccio Zanchi of Yamaha Europe EMX125 MJC were just behind the leader.

Mathis Valin started well too, and at one stage was third, before being passed by Fueri who got around him and Zanchi. Meanwhile his teammate Valk was applying the pressure onto Werner and at one point may have pushed too hard as a mistake saw him go off track which allowed Fueri to get closer.

Valk was able to hold his position and by the third lap got himself into the lead. Fueri was quick to follow as he also passed Werner for second place. At that point it was a Fantic 1-2.

Werner the dropped a few more positions as he went down to sixth. While on lap four Fueri made a pass on his teammate for the lead after also setting the fastest lap of the race. Janis Martins Reisulis was making good progress at that point in the race too as he worked his way into third and kept a close distance to the leaders.

In the end, Fueri was able to open up a very comfortable gap to Valk and J.M Reisulis as the Frenchman went on to win the opening race with an impressive 13.224 second advantage over Valk who crossed the line in second ahead of J.M Reisulis, while Marc-Antoine Rossi of Tech 32 and Yamaha Europe EMX125 MJC’s Ivano Van Erp rounded out the top five.

In the second race, it was Van Erp who was the leading rider with J.M Reisulis second ahead of Tom Brunet. Meanwhile race one winner, Fueri, went down in the first corner and took a bunch of riders down with him. He had to get going from last.

Van Erp continued to lead with J.M Reisulis applying the pressure in second, while Karlis Alberts Reisulis of Yamaha Europe EMX125 MJC worked his way into third ahead of Rossi and Brunet who dropped a few positions.

Valk then got by Brunet for sixth and then moments later moved up to fifth, as his teammate Fueri entered the top 30.

Van Erp had a steady lead but could not afford to relax as J.M Reisulis began to come under fire from his brother K. Reisulis. On lap four, Janis-Martins made a mistake and dropped back to fourth, as Karlis moved into second, with Rossi also benefiting from that as he took third.

In the closing stages of the race, we saw K.Reisulis and Van Erp switch positions several times, with both riders making mistakes which allowed the other to take opportunity to take over the lead. After a few more laps like that, Van Erp was able to open up a gap and eventually secure his first race win of the season as he crossed the line 6.417 seconds ahead of K. Reisulis and Rossi who was third with J.M Reisulis holding off Valk to finish fourth.

A fifth and a win gave Van Erp his first overall victory of the season, with Rossi joining him on the podium to finish second ahead of J.M Reisulis. Despite missing out on the podium, Cas Valk remains as the championship leader and is 27 points ahead of Fueri, while K.Reisulis remains third just three points further adrift.

“I’m feeling so good. It’s nice to be on the podium and win the GP, last year I was a rookie and got my best result here also, so it’s really nice to take the overall in Spain.” Said Van Erp. “The riding was good, in the middle of the second race I needed to control because it was a little bit warm but in the end of the race I picked up the speed and could get a gap. I’m happy with today and hope to take this to the next races.”