Home Motocross MXGP MXGP Sardegna: ‘I knew it would be extremely tough’ – Gajser 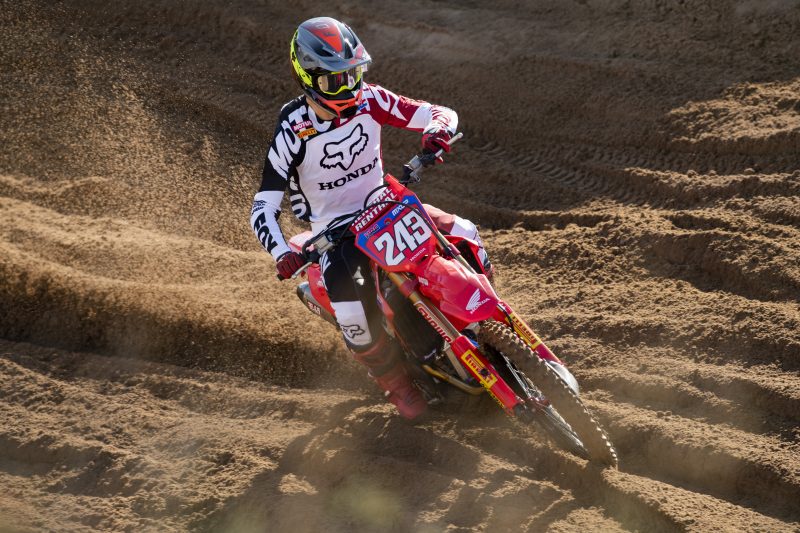 HRC Honda’s Tim Gajser had a tough round of the MXGP World Championships this weekend, recovering from a training injury in which he suffered a broken collarbone.

The hot weather and the deep sand of Riola Sardo saw Gajser struggle with pushing himself, but still managed to score fifteen championship points to keep him just one point behind the new leader Red Bull KTM’s Jeffrey Herlings.

“Coming into this race, I knew it would be extremely tough but I know how important that every single point can be in this championship battle so I wanted to try,’ said Gajser.

“Despite the injury, I actually felt pretty good, posting a fast lap time in free practice, but I wasn’t able to do a good one in the timed practice and this really hurt my chances of a top ten start. Then unfortunately, in the first moto, I got caught up by another rider as he fell over round the first bend and I had to remount almost last.”

“I tried to regroup but another crash a lap later made things very difficult. I didn’t give up though and kept pushing and pushing and eventually I passed a couple of guys to finish Nineteenth.”

“Obviously, I was disappointed but I really felt I could do better if I got a good start, which thankfully I did in race two. I rounded the first lap in twelfth place and I got into a nice rhythm on what was a really difficult track. I knew I was fit, and although I was hurting, I battled through into eighth place.”

“Overall, I am happy to have scored fifteen crucial points and with a weekend off to get healthy, I hope that by Teutschenthal, I will be able to be back battling for wins once again. A big thank you to the team for supporting me during this difficult week, I really appreciate everything you do!”