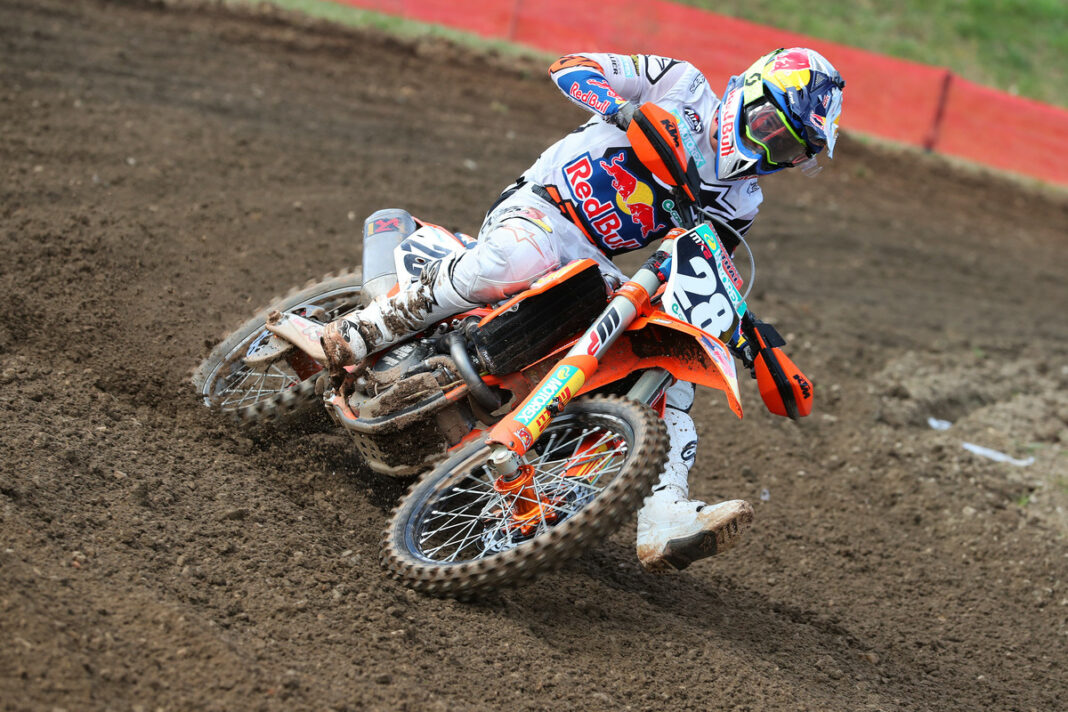 Red Bull KTM’s Tom Vialle made a clean sweep of MX2 victories at the season opener in Russia, winning both races at the Orlyonok track.

The hilly beachside circuit hosted the first round of the season today, with a strong lineup of veteran riders and young guns making the move up to the MX2 class. The door was wide open heading into the season opener, as the delay in starting the championship meant riders could get some extra races under their belts across Europe, to be fully prepared for the event.

As we have seen the young MX2 World Champions do many times before, Vialle grabbed the holeshot in the first race of the day yards ahead of the rest of the pack, just as Rockstar Husqvarna’s Jed Beaton got tagged in the first turn, which dropped him further down the pack to eighth position and led him to push his way back through to seventh just past Maxime Renaux.

Beaton’s team mate Kay De Wolf had a great ride in his MX2 debut, finishing up a solid tenth behind Red Bull KTM’s Mattia Guadagnini, as his team mate Vialle set the fastest lap ten minutes into the first race, checking out with a ten second lead ahead of Honda 114 Motorsports Ruben Fernandez, and the F&H Kawasaki’s Roan Van De Moosdijk.

You can see all of the race results HERE.

Heading into moto two of the day, Rene Hofer grabbed the holeshot ahead of Vialle, but dropped to third as Fernandez and Vialle flew through, with Vialle shutting the door and taking an early lead, and the fastest time again in lap three.

Beaton came together with Isak Gifting having a huge crash over the tabletop, which knocked Beaton way back down to sixteenth and saw Gifting retire from moto two. After struggling with arm pump in the first moto, Hofer started to make some ground on the race leader, as further down the field in sixth place Stephen Rubini made a mistake crashing out but managed to still finish.

Mathys Boisrame started putting the pressure on Fernandez mid way through the moto, diving to make a huge pass down the hill and grabbed some extra drive to put himself up into third, and then dropped the hammer to make the pass on Hofer to move up and to finish in second place, as Vialle took another win with another two second lead.

You can see all of the race results HERE.