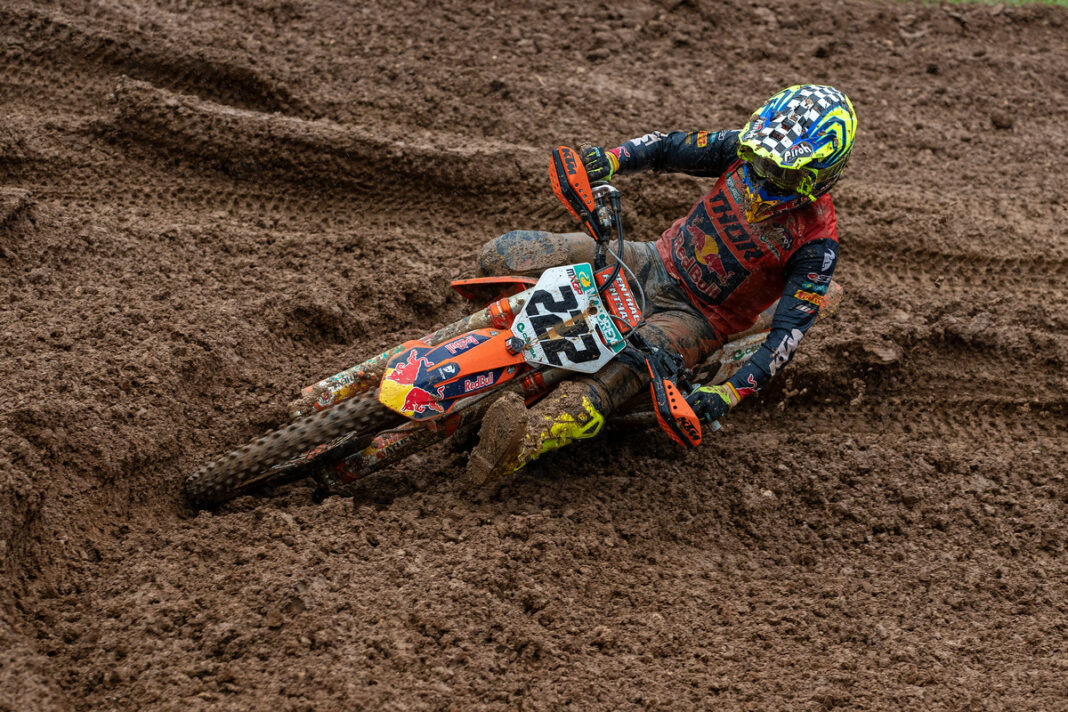 Red Bull KTM’s Antonio Cairoli grabbed the second MXGP race win at Oss, stealing it away from Tim Gajser on the last lap.

Red Bull KTM’s Jorge Prado grabbed a storming holeshot in the second MXGP moto, as a huge pile up on the first corner left Monster Yamaha’s Glenn Coldenhoff at the back of the pack.

A first lap scrap between Prado, Romain Febvre and HRC Honda’s Tim Gajser then caused Febvre to have a huge off after getting cross rutted on one of the jumps, which caused him to jump off track and hit the spectator fence.

Meanwhile ten minutes into the moto Jeremy Van horebeek came together with Hitachi KTM’s Adam Sterry further down the pack with both of them going down at the end of the mechanics’ area, which dropped them right down the back of the pack.

Midway through the moto HRC Honda’s Gajser set the fastest lap as the chase continued for the race lead, with him putting the pressure on Prado in true Gajser style.

Leaving it until three laps to go to make the move on Prado to take the race lead, Gajser shot through to talk the race lead. Prado’s teammate Antonio Cairoli tried to make the move on second place man and then started to close the gap on the Slovenian Honda rider, as Cairoli grabs the moto two win on the last lap of the second MXGP moto of the day.

Great results in the second moto from Monster Energy Yamaha Ben Watson securing a sixth position, as SS24’s Shaun Simpson had a decent two motos grabbing a seventeenth, followed by Adam Sterry in twentieth and Nathan Watson just behind in twenty first, and a much better race for Josh Gilbert in twenty seventh.

You can view all of sunday’s race results HERE.

MXGP Spain: ‘I found that Intensity that I needed’ – Jonass

MXGP Spain: ‘I don’t know what happened after the gate dropped’ – Herlings