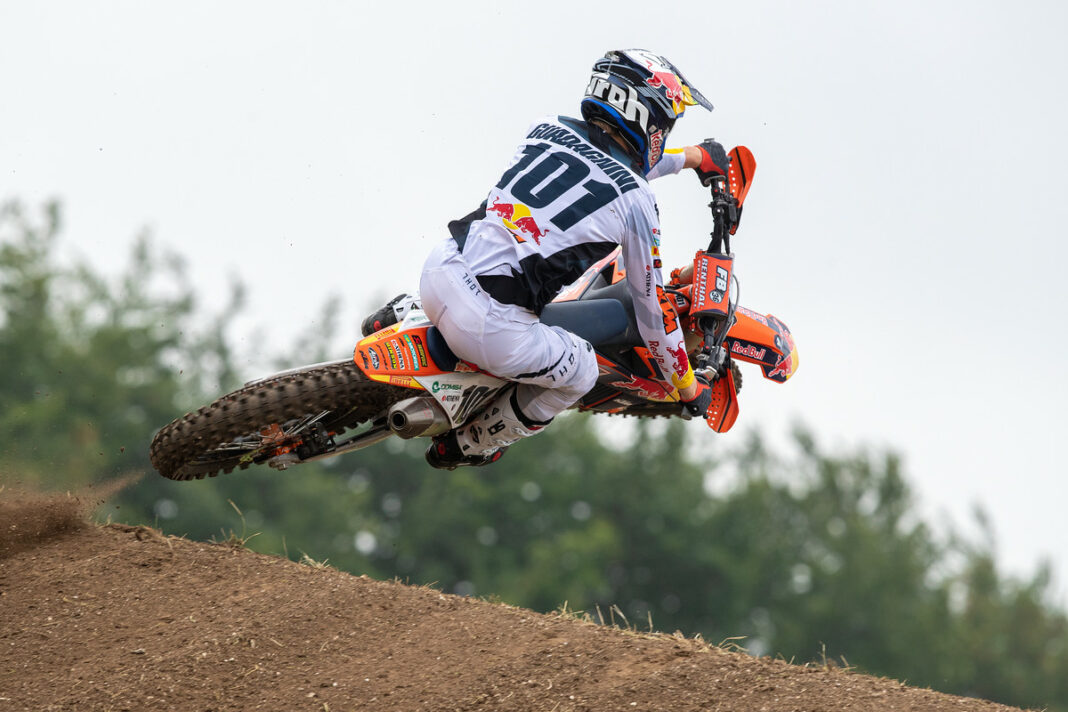 Red Bull KTM Mattia Guadagnini claimed a fantastic win on home soil in the MX2 class, following on from his podium finish in Great Britain.

Monster Energy Factory Yamaha Jago Geerts grabs the Fox holeshot for the second MX2 moto of the day in Italy, with the track conditions changing each lap it was a pretty open race. Red Bull KTM Mattia Guadagnini moves into the lead within a few corners and started to push away from the rest of the group.

First lap carnage continued with race one winner Thibault Benistant going over the bars on the first corner, which left him pretty much dead last. Championship leader Ruben Fernandez also came together with another rider leaving him dead last in the pack, which meant him and Benistant had to carve their way through the rest of the field.

Geerts and Hofer almost came together jumping down one of the hills whilst battling for third and fourth position, with Hofer looking smooth and confident but just didn’t make the pass stick and finished in sixth, with Geerts in fifth.

Fernandez however was on a mission during the second moto to try and cut through the pack and make some ground and get back into the points and managed to grab a great twelfth position. FH Racing teams Roan Van De Moosdijk and team mate Mathys Boisrame shot past Geerts with two laps to go, and continued to battle with each other for the rest of the moto ultimately finishing third and fourth.

Brit rider Conrad Mewse didn’t have a great start for the second MX2 moto, but still managed to grab a decent finish in fifteenth ahead of his team mate Ashton Dickinson in 24th place, followed by the young 114 Motorsports Honda rider Joel Rizzi down in 30th place. Bike it Kawasaki rider Taylor Hammal also had some bad luck suffering a DNF on the first lap.

Mattia Guadagnini claimed the overall win and the championship lead on home soil to round up today’s MX2 racing.

You can check out all of todays results HERE.