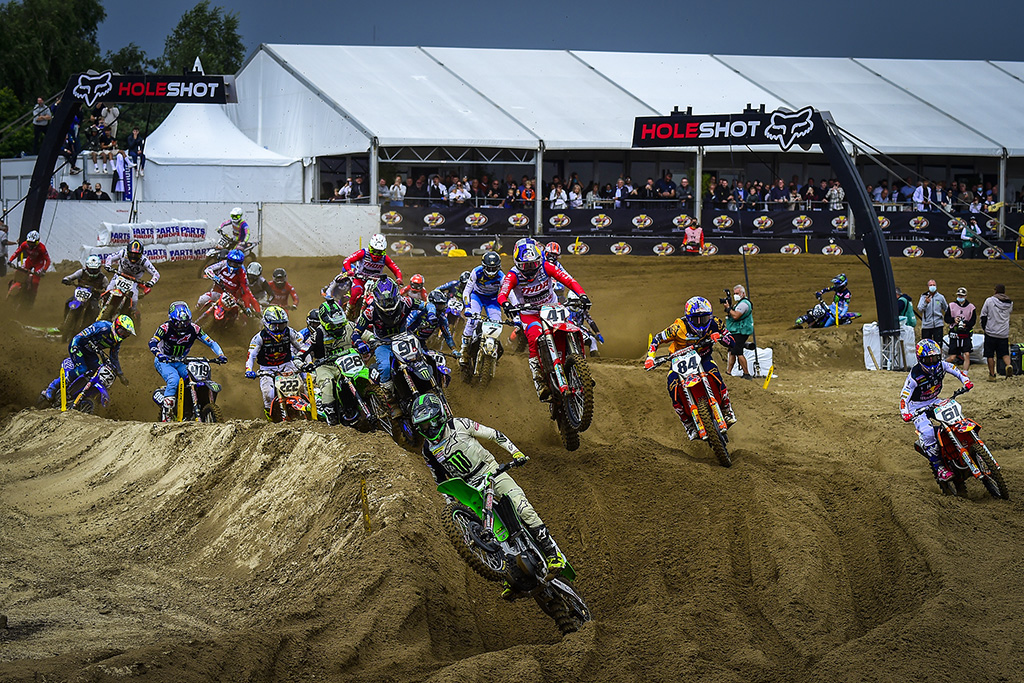 This weekend, MXGP heads to the deep sand of Lommel for this year’s Flanders Grand Prix.

All eyes will be on Monster Energy Yamaha Factory Racing’s Jeremy Seewer who will enter the MXGP of Flanders off the back of a second Grand Prix victory this season, which would make it his best GP season in MXGP to date. Despite illness at the Indonesian round, the Swiss has been on top form lately and has five podiums and three race wins to his name so far, including those two GP victories. Though the Yamaha rider is yet to stand on the top step at the GP in Lommel, but maybe this season he could make it happen.

A rider that will no doubt be in the running for the top step is Team HRC’S Tim Gajser who enters the 14th round with a 125-point advantage over Seewer in the championship standings. This is the perfect position for Gajser to be in, meaning that he will not be riding under pressure. Gajser won the GP in Lommel in 2019 and twice in 2022, though last year was beaten by Kawasaki Racing Team MXGP’s Romain Febvre.

Last weekend in Czech Republic, Febvre was among the few riders who were missing on the start gate of the second race. After having a rough couple of days due to an illness, the Frenchman decided to not line up for the second heat and instead give his body some rest. This would be Febvre’s fourth race from injury, so a victory on such a tough sand track may be a lot to expect, but that does not take him out of the running either, as he proved just how strong he was in Lommel last year.

Monster Energy Yamaha Factory Racing’s Maxime Renaux surprised many with his comeback at the MXGP of Czech Republic as the Frenchman went on to win the second race and stood tall on the second step of the podium. Many did not expect such a turnaround and his strong performance took many by surprise but it will be interesting to see what he can do this weekend and whether he can repeat his success of 2021 and get on the podium once again.

Monster Energy Yamaha Factory Racing’s Glenn Coldenhoff and Jorge Prado of Red Bull GasGas Factory Racing are also serious podium contenders and have proven to be strong sand riders in previous races. Coldenhoff will be looking to make his return to the box, after missing out in the last three GP’s after building a nice streak in Sardinia, Spain and France. Meanwhile Prado will need to work further on his strength as he struggled in Czech Republic towards the mid-part of the races.

Gebben Van Venrooy Yamaha Racing’s Calvin Vlaanderen not doubt earned his seat at the table after his impressive stint in Sardinia, where he not only topped the charts in each practice session, but also won every single race that weekend. Vlaanderen showed that he is one skilled sand rider, which will come in very handy this weekend and it could be another occasion that we see the Yamaha rider finish on the box.

Pauls Jonass of Standing Construct Husqvarna Factory Racing had a tough weekend in Loket, after placing 12th in race one and not finishing the second race due to a crash. Though last year the Latvian finished on the podium in Lommel so another trip to the box could be pending.

Unfortunately, both of the Honda 114 Motorsports riders Ruben Fernandez and Haakon Fredriksen will be missing at the MXGP of Flanders, after picking up injuries at the previous round in Loket. Their return is not yet known.

Home riders Jeremy Van Horebeek of Beta SDM Corse, as well as Brent van Doninck of Riley Racing Yamaha and Cyril Genot of Ship to Cycle Honda SR Motoblouz will be looking to put on their best performance on home soil and another trio to keep an eye out for.

Not only is Geerts the championship leader and last weekend’s GP winner, but he is also the MXGP of Flanders victor from last season too, which means there will be only one thing on his mind this weekend, and that is – winning!

Though it will be interesting to see if the desire to win will affect him in any way, as we all know, riding under pressure is never good and could give the upper hand to Vialle if Geerts is not careful. So far in 2022, we have seen the red plate change eight times, which means any minor mistakes cannot be afforded by either one of the title hopefuls.

Monster Energy Yamaha Factory Racing’s Thibault Benistant will also be another favourite for the weekend after his success this season so far. The Frenchman has five podiums under his belt, which includes a GP victory and three race wins too. Benistant has proven he has what it takes to run with the leaders, and it will be nice to see what he has in store for us in Belgium.

There is no doubt that among the list of the strongest sand-riders on the grid includes Nestaan Husqvarna Factory Racing’s Kay de Wolf who was a podium finisher at the MXGP of Flanders last season. Born in Holland just over the border, de Wolf is no stranger to the deep sand and could challenge Geerts and Vialle for race victories this weekend. Last year a race win helped him onto the second step of the podium, with the Dutchman just two points shy of the GP victory, but maybe he can get it done this time around?

Last weekend’s podium finisher Simon Längenfelder of Red Bull GasGas Factory Racing is also in the running for the podium and the confidence from being on the box in Loket could be the boost he needs to succeed in Lommel. In 2019, Längenfelder was the winner in the EMX125 category which means he has what it takes to win on the sand track. But the competition will be fierce.

Looking at the entry lists there is one name that we did not see for a while and that is Roan Van de Moosdijk of Nestaan Husqvarna Factory Racing who is set to make his return to racing after picking up an injury in Argentina. Van de Moosdijk is another strong sand rider and it will be interesting to see what results he can deliver on his first world championship outing since recovery.

Diga Procross KTM Racing’s Liam Everts will be looking for some top scores this weekend as he enters his home Grand Prix. This season, Everts has had some very strong races that saw him battle inside the top 10 and the top five on numerous occasions and hopefully he can bring this level of competition this weekend to his home round and give the Belgian fans something more to cheer about.