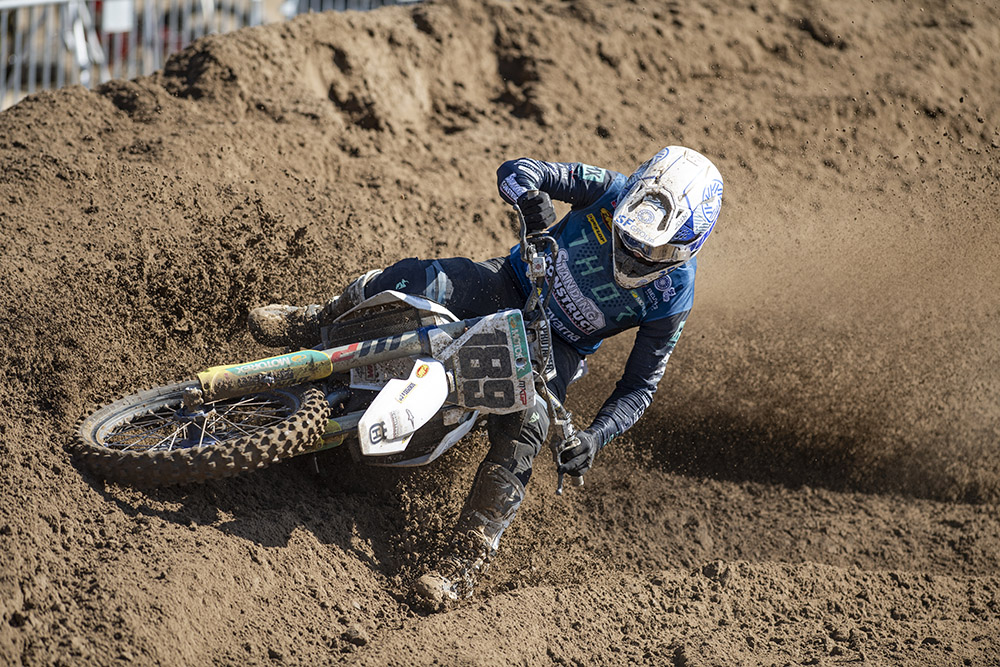 Husqvarna’s Brian Bogers bagged his maiden MXGP overall win in the sand of Lommel while Tim Gajser continued to led the points table.

Seewer then flew by Gajser to get himself into second, as Bogers made the most of this opportunity to also get past the Slovenian. Gajser briefly fought back, but Bogers was able to assert himself in the position.

As Gajser came under further pressure, Febvre and Vlaanderen also fought each other for fifth, as eventually, the Frenchman was able to make it stick. Febvre then passed Gajser for fourth on the third lap, with Vlaanderen able to get by soon after too.

Seewer then dropped to fourth place as Bogers made his way into second place. Febvre followed in tow. Bogers then clocked the fastest lap of the race as he closed the gap to Prado. The Dutchman took the Spaniard by surprise as he confidently dove down the inside of Prado for the lead.

Prado began to fade as Febvre got by, as did Vlaanderen who went from fifth to third on lap 9. Prado dropped a few more positions as Seewer, Coldenhoff, Renaux, Gajser and Mattia Guadagnini of Red Bull GasGas Factory Racing got by. The Spaniard finished the race in 9th.

In the closing stages of the race, Vlaanderen stalled his bike which allowed Seewer through into third. Though the South African bounced back immediately to keep hold of the third position. In the final three laps of the opening heat, Vlaanderen caught Febvre off-guard as he took second from the Frenchman while Bogers was already more than 10 seconds ahead in the lead.

Bogers went on to win the race, with Vlaanderen second and Febvre third. Coldenhoff was fourth ahead of Renaux, while a crash for Seewer put him down in sixth ahead of Gajser.

In race two, Prado was the Fox Holeshot recipient for the 15th time this season. He led Kawasaki Racing Team MXGP’s Ben Watson, Coldenhoff, Bogers, Seewer, Febvre and Gajser on the opening lap, as Coldenhoff quickly jumped into second.

Watson dropped back to sixth by the end of lap one, as Coldenhoff got to work on Prado.

Seewer crashed out of seventh and fell back to 10th, though was able to get going quickly, it was an uphill battle from then on for the Swiss.

On lap four, Coldenhoff was the leading rider, as Prado dropped to second while Gajser was passed by Febvre and Bogers. The Slovenian came under more pressure as also Vlaanderen went by to take away fifth.

Febvre then began to apply the pressure onto Prado who tipped over just as the Frenchman passed him for second place. The Spaniard got going ahead in seventh ahead of Watson.

Vlaanderen looked like he wanted to repeat race one as he got onto the back of Febvre, but a couple of mistakes saw him get passed by Bogers who moved into third. Febvre set the fastest lap of the race on lap seven but was still 4.120 seconds down on Coldenhoff who looked strong despite not feeling good all week.

On lap 10, Vlaanderen found his way past Bogers and then three laps after that got around Febvre for what should have been the overall victory. But Bogers had other plans, as he too passed Febvre which shook up the top step of the podium for the third or fourth time in that race.

In the end, Coldenhoff crossed the line first and won his second race of the season ahead of Vlaanderen and Bogers. Febvre was fourth as Seewer managed to fight his way back to fifth.

A race win and a third put Bogers on the top step of the podium, with Vlaanderen second and Coldenhoff third as the Dutchies swept the podium at the Belgian GP.

Despite missing out on a podium finish and struggling all weekend, Gajser continues the lead the MXGP Championship standings and is now 122 points in front of Seewer, while Prado remains third.

Brian Bogers: “I don’t even know what to say… What can you say on the top of the podium? It’s just amazing and I can’t believe it. It was really tough, but we made it. It was a close call in the end and it’s strange because in the first race you have flow and it’s easy but the second race, you think you can do the same, it will be easy and it didn’t work out like that, but we still managed to push every lap and until the end of the race”.