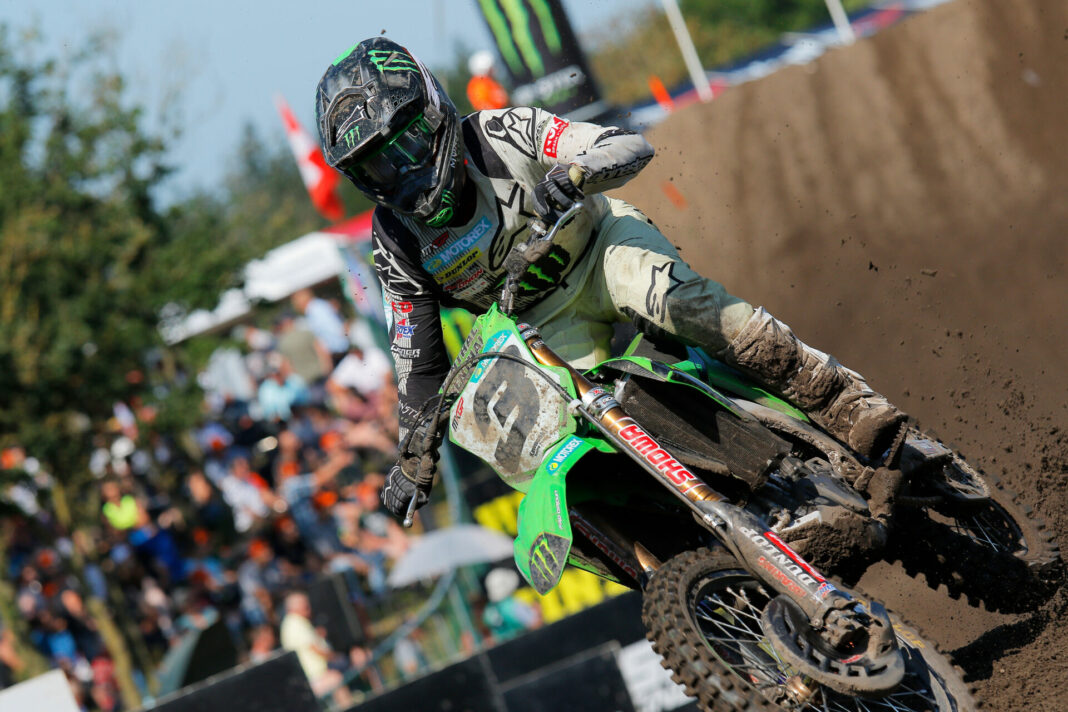 Monster Kawasaki’s Romain Febvre won the his first Lommel MXGP race and took the overall for the weekend in Belgium.

Febvre led the second MXGP moto of the day out of the gate, as his team mate Ivo Monticelli had a huge off on the first corner and retires. Standing Construct GasGas rider Pauls Jonass had another good to start to his race sitting in second position just in front of HRC Hondas Tim Gajser on the opening few laps.

Febvre then made a mistake throwing the lead away to Jonas, as Prado starts to make a move and starts to make the charge on Gajser, as Tim just loses the front dropping out of second place. Red Bull KTM Jeffrey Herlings just got squeezed out on the start coming together with Monster Energy Yamaha Ben Watson which left him mid pack, but ten minutes into the second moto he starts picking people off and making moves through the field.

SS24 Shaun Simpson was having a great ride but due to the heavy rain and the strain on the bikes riding in the heavy sand, his KTM suffered as it overheated and caused him to DNF. Hitachi KTM Adam Sterry and stand in rider Todd Kellett both completed decent rides for the day, finishing 21st and 24th, with Ben Watson bringing it home in a solid twelfth.

Febvre fought back with a couple of laps to go with making the move on Jonass, as Gajser really started to close the gap on the GasGas rider before just losing the front end again which dropped him down to finish fourth.

However a big win for Romain Febvre, followed by Pauls Jonass, Jorge Prado, Tim Gajser and Jeffrey Herlings rounding out the top five.