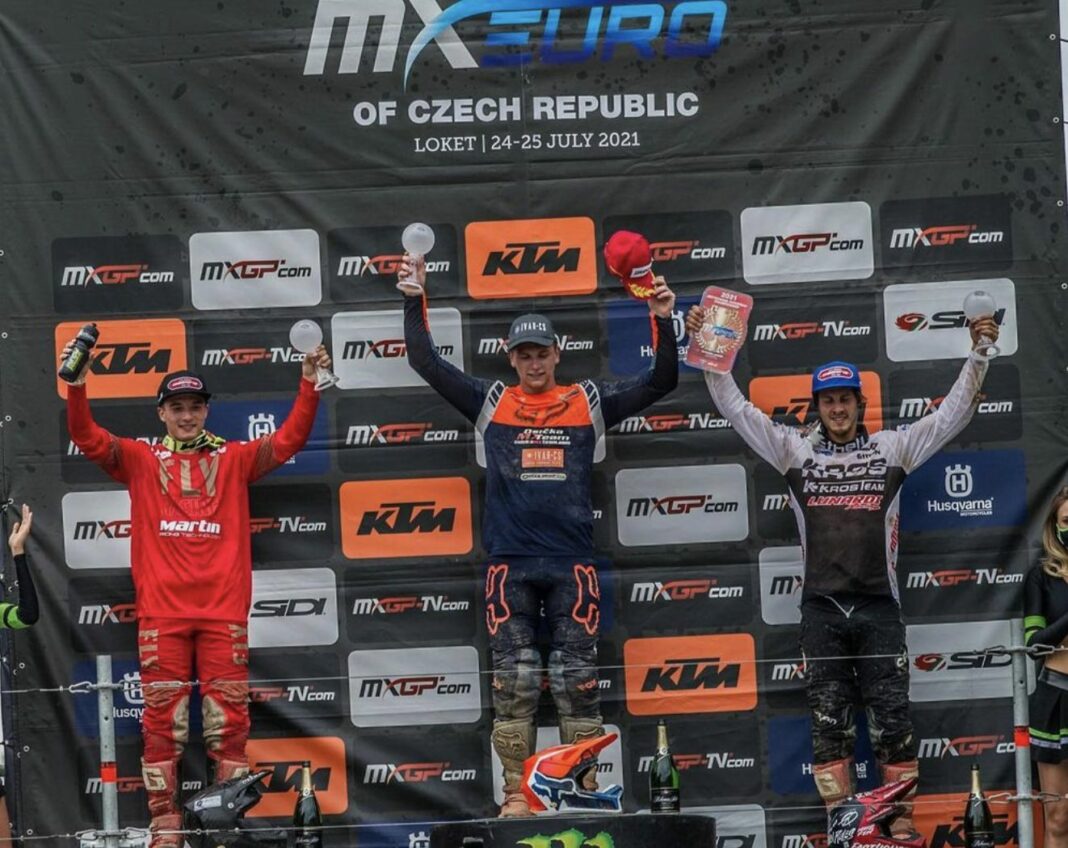 In the opening EMX Open race, it was Joel Van Mechelen who got a good start, with Filippo Zonta and Simone Croci just behind. The championship leader Nicolas Dercourt of Honda SR Motoblouz grabbed a bad start which left him down in tenth. Zonta then took the lead, with Croci following as well, as Dercourt dropped to Fourteenth.

Croci then closed in on the race leader, as Davide De Bortoli and Simon Jost battled for third, with the pair exchanging positions several times over the course of the lap. Jost then dropped to fifth as De Bortoli and Micha-Boy De Waal of No Fear/Jumbo BT Racing Team both went through on the Slovakian rider.

Croci then briefly took the lead from Zonta, as De Bortoli and De Waal closed in on the leaders with just over three seconds separating the top four. De Bortoli then passed Croci on lap eight and was able to get Zonta as well to become the new race leader. Zonta then crashed and re-joined in fifth to eventually finish the race in fifth place ahead of Jost. De Bortoli then took the win, with De Waal and Croci second and third, as Dercourt struggled to make his way up the field and ended the race ninth.

As the gate dropped for race two, it was Zonta who led the way, as De Waal had a big crash in the second corner. Zonta carried on out front, with De Bortoli wasting no time applying the pressure onto the leader.

By lap two, De Bortoli was the new race leader, Jost started to close in on Zonta as he set his sights on second place. Meanwhile Dercourt was having a much better start to the race as he battled in sixth position. De Waal did pick himself up after the crash in the start and managed to get up and carried on for ten laps until deciding to pull out of the race.

The attention quickly moved to the front as Zonta and Jost went at it for second. The pair had a nice battle that saw Jost go through, for Zonta to fight back immediately but eventually it was the Slovakian rider who came out on top.

With eight minutes and two laps to go, the gap between De Bortoli and Jost was three seconds, but a couple of laps later we saw some drama as De Bortoli crashed out of the lead. Jost then inherited first place, with Tim Koch second and Zonta third, as De Bortoli dropped to fourth position.

De Bortoli then crashed again to finish the race in tenth, while Jost took his first ever EMX race win, with Koch second and Zonta third. In terms of the podium, it was Simon Jost who secured the top step, with Filippo Zonta placing second and Davide De Bortoli second.