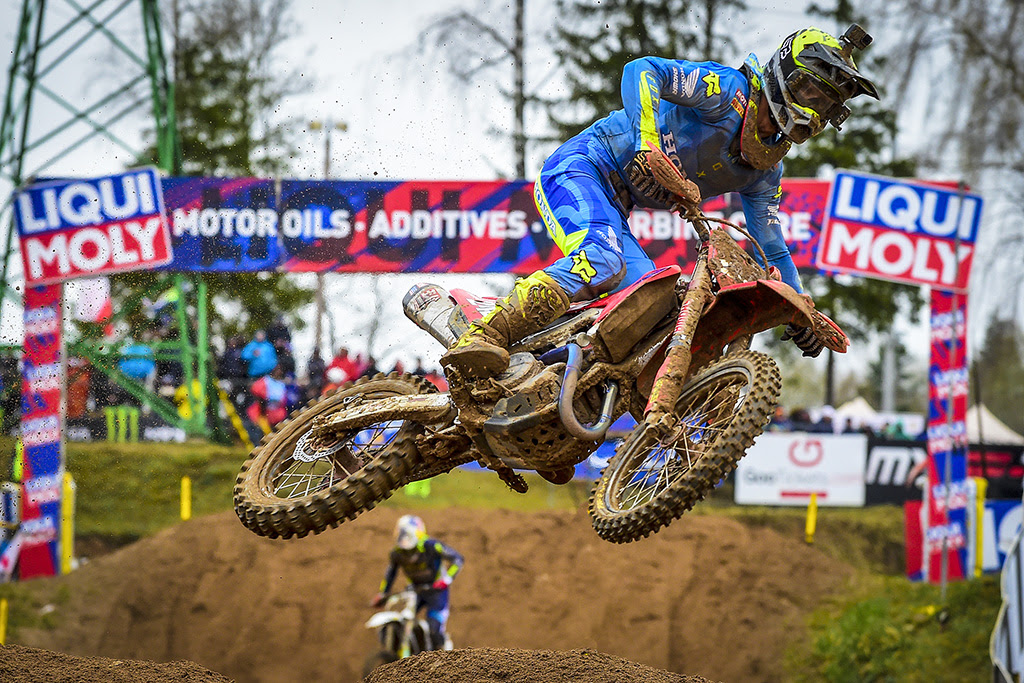 A couple of riders went down, which included JK Yamaha Racing’s Alvin Ostlund and Team HRC’s Mitch Evans. Evans managed to come back to 19th, while Ostlund was 21st.

On the opening lap, Jonass took second from Gajser, which was celebrated by the local crowd. Meanwhile further down the order Ivo Monticelli of JM Honda Racing and JT911 Racing’s Jordi Tixier both crashed together out of 14th and 15th place. They were able to fight back to 16th and 17th by the chequered flag.

SM Action GASGAS Racing Team YUASA Battery rider Alberto Forato was having a strong race in sixth as he looked to keep Monster Energy Yamaha Factory Racing’s Maxime Renaux at bay. While the pair battled on, the third Monster Energy Yamaha Factory Racing rider, Glenn Coldenhoff was able to make the most of it and slip past his teammate for seventh.

Prado then set the fastest lap of the race as he looked to break free of Jonass and Gajser, though they didn’t let him have it as they remained close for much of the race.

The attention then went back to the fight for sixth, as Standing Construct Husqvarna Factory Racing’s Brian Bogers caught onto Renaux and was looking to dive down the inside. He did try the move, but Renaux was able to read it well and respond immediately.

Seewer then set a fast lap of his own as he looked to close in on Fernandez ahead in fourth, as Gajser had a moment trying to go after Jonass for second.

Forato then passed Seewer fir sixth, as the Swiss came under further pressure from his teammate’s Coldenhoff and Renaux, to eventually drop back to seventh behind both riders.

Gebben Van Venrooy Yamaha Racing’s Calvin Vlaanderen came in for a fresh set of goggles via the goggle lane, but then crashed and dropped a few more spots before coming back to 14th.

Towards the latter stages of the race, Jonass was able to reel in Prado, though Gajser was not hanging back either and on lap ten was able to get by the Latvian. It took the Slovenian just a lap after that to steal first from Prado.

While Gajser would have wanted to make a run for it, Prado tried his best to keep with him and in the last lap it was game on for the win. Prado was charging as he tried to make a pass just meters from the finish, but jumped too far, crashed after hitting the rear wheel of Gajser and almost took the Honda rider down with him.

Gajser managed to keep it up right to win the race ahead of Jonass, Fernandez, Forato and Coldenhoff, as Prado eventually crossed the line in 12th.

In MXGP race two, Jonass took his first Fox Holeshot since Turkey 2019. Fernandez was just behind, with Gajser looking to get a pass on the Spaniard in early as Coldenhoff and Prado followed.

Gajser was able to do just that, as he got himself into second and focused his effort on Jonass. The Slovenian set the fastest lap of the race as he closed the gap down, though Jonass was not going to back down and put up a fight for a solid six laps.

Meanwhile Prado crashed on the second lap and got up again in 17th. He pushed hard to make some passes and could only get back to 13th by the end of the race.

Bogers then passed Fernandez for third, as Fernandez fought to respond immediately, though could not make it happen. Things worked out well for him in the end as Bogers went down and fell to sixth, so Fernandez could get back into the position.

As Bogers got going, he had Vlaanderen on his case. The sudden pressure urged on the Dutchman who then caught up to Renaux and battled with him for fifth.

Coldenhoff then caught up with Fernandez and in the closing stages of the race we saw the two battle. Just a few meters from the end, Fernandez thought he had third in the bag, but Coldenhoff had other ideas, as he got better speed going wider towards the finish and beat Fernandez on the line.

Gajser went on to win the race, with Jonass celebrating second ahead of Coldenhoff, Fernandez and Renaux who was able to fend off the pressure from Bogers.

Gajser had the perfect scorecard, going 1-1 to claim another GP victory in Latvia, while Jonass made for a memorable home GP to stand on the second step of the podium in front of a huge crowd of Latvian fans. He was not the only one to have a big celebration, as Fernandez occupied the third step, securing his very first podium in MXGP.