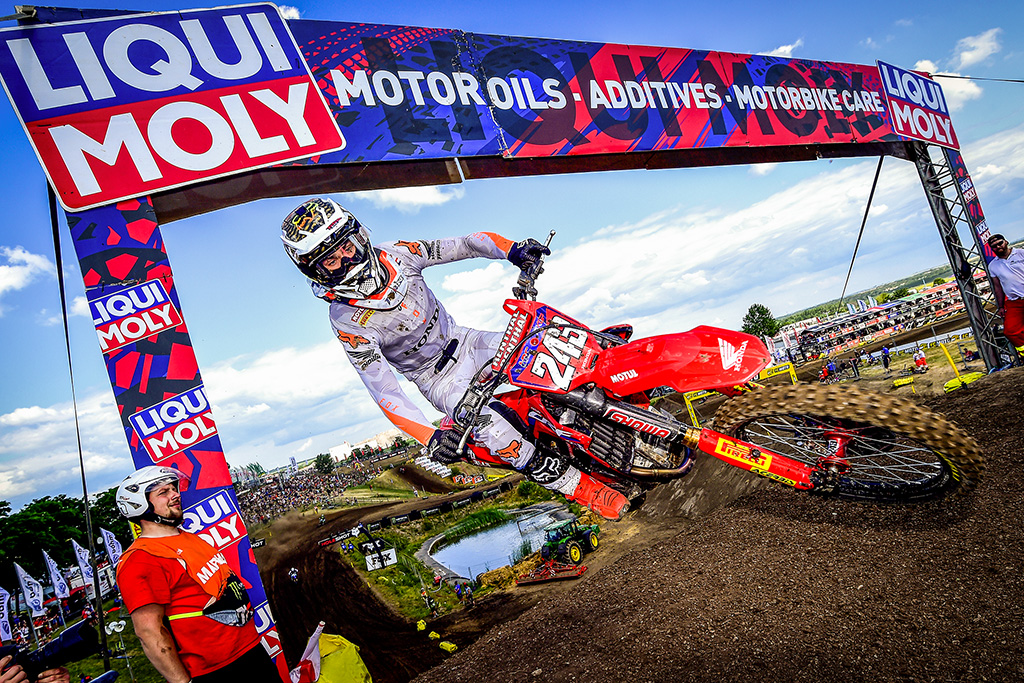 Former MXGP king Tim Gajser increased his championship lead at Teutschenthal with the overall win, taking advantage of Maxime Renaux’s absence with several broken vertebrae after his crash in qualifying.

Early on, Seewer began to push Febvre for third. It took the Swiss two laps, but he was able to make the pass happen.

Prado briefly took fifth from Guadagnini who immediately fought back, but eventually by the end of the lap Prado was able to secure the position from his teammate. Once the Spaniard got by the Italian, he set his sights on Febvre who was just ahead.

Gajser led the way and was looking solid as he also set the fastest lap of the race. While he was looking to run away with it, Seewer began to close in on Jonass who was second.

Meanwhile Prado continued to push Febvre, though made a mistake himself and crashed on lap 12. He got going again in seventh just behind Guadagnini and Honda 114 Motorsports’ Ruben Fernandez.

There was no change inside the top for the next several laps as Gajser went on to win the race ahead of Jonass and Seewer.

In race two, it was Seewer who got the Fox Holeshot that time around, with Gajser, Prado, Fernandez and JM Honda Racing’s Henry Jacobi just behind.

In the first few corners, Prado took second from Gajser who responded shortly after to move back up to his original positions.

Jonass crashed out of fifth as he and Fernandez looked like they had a moment. With Fernandez losing ground, Gebben Van Venrooy Yamaha Racing’s Calvin Vlaanderen was able to use this to his advantage to take over fourth from the Spaniard.

With Seewer in the lead, Gajser was looking fast though could not get close enough to the Swiss to execute an attack.

Fernandez meanwhile was looking to fight back and take his lost position from Vlaanderen who immediately went defensive to keep the Honda rider at bay.

In the end there was not big changes inside the top 10 as Seewer claimed his second race victory of the season. Gajser crossed the line in second ahead of Prado, Vlaanderen and Fernandez.

A 1-2 result gave Gajser the upper hand as he took his seventh overall victory of the season ahead of Seewer who made it two podiums on the bounce with second overall ahead of Prado who was third.

With Renaux out of the GP, Gajser now holds a 99-point lead in the championship standings ahead of Seewer and Prado who both move up.

“It was a really positive weekend; I was feeling great on the track. Yes I won today and also the starts were improving so super happy,’ said Gajser.

“First race, I took the Fox Holeshot, made a little gap and controlled the race. The second one I didn’t have the best start, I had to pass a couple of guys and then I was behind Jeremy who was riding really good and had good pace, so I just settled for second… I’m looking forward to Indonesia.”