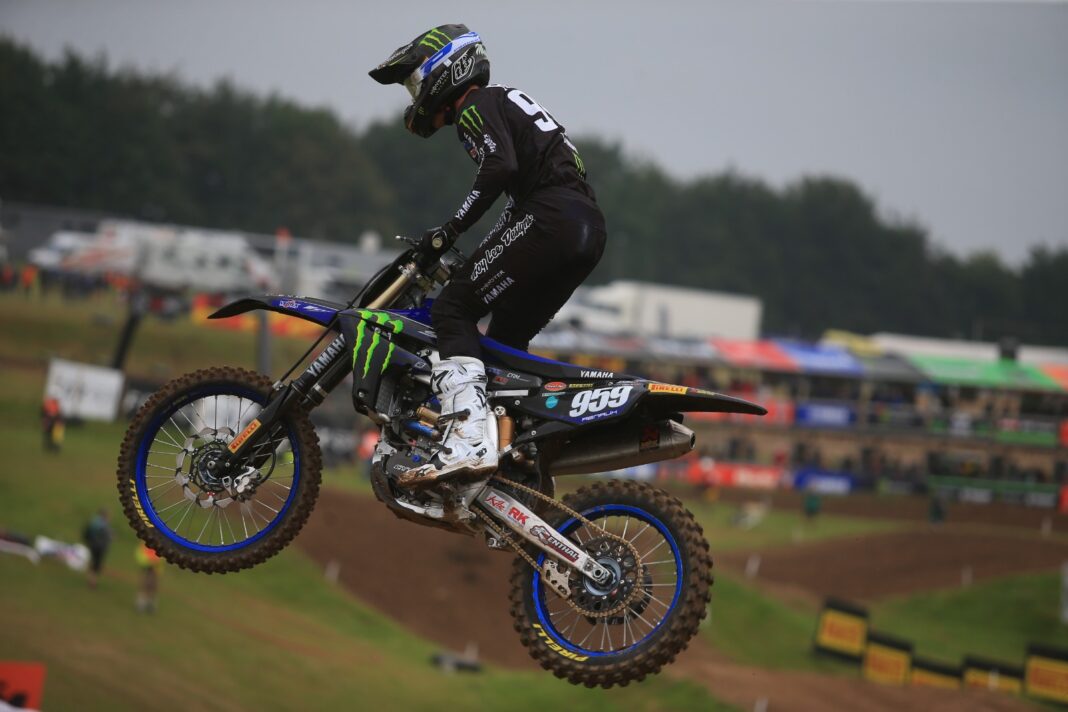 Monster Yamaha’s Maxime Renaux checked out in MX2 Moto one today at Matterley Basin, for round two of MXGP.

Heading out for timed practice at the drizzly Winchester circuit, Rockstar Husqvarna’s Jed Beaton putting an early fast lap in shortly followed by Renaux. Whilst being back to good health, Hitachi KTM rider Conrad Mewse put in a solid time and sat in third to round up the morning. Honda 114 Motorsports rider Joel Rizzi grabbed his first home MXGP timed practice position also with a 29th in a stacked MX2 Class.

Renaux shot out the gate for the first MX2 moto of the day, with Mathys Bosrame hot on his tail, followed by Thibault Benistant and Beaton. Mewse didn’t get that good of a start and had his work cut out pushing his way through the pack for the rest of the moto.

Bike It Kawasaki’s Taylor Hammal took an excellent 12th place and making his debut for Hitachi KTM, Ashton Dickinson flew off the start and managed to finish up in a great fourteenth place.

Meanwhile further down the field Rockstar rider Kay De Wolf made a mistake, crashing but still managed to salvage a solid fifteenth position for the first moto of the day.

Red Bull KTM’s Rene Hofer also had some bad luck suffering a crash causing him to not to be able to re-start his bike, leaving him right down in 30th position. As the track conditions started to change, this then caught out Beaton as he crashed out of fourth place, as he then eventually pulled in with a DNF.

Honda 114 Motorsport rider Ruben Fernandez put the pressure on second place man Boisrame, making a move up on the inside on the very last corner stealing second place away from Boisrame, just at Renault claimed the race win with a 2.5 second lead.

MX2 Moto two saw Red Bull KTM’s Mattia Guadagnini grab a storming holeshot out the gate, ahead of teammate Hofer. Fernandez followed suit in the second moto pushing hard to chase down the front two runners, before making a mistake and dropping to finish in seventh place.

Mewse struggled again off the start gate, sitting way down at the back of the pack before working his way through to finish in sixteenth position just ahead of Dickinson. Meanwhile further up the field Boisrame was all over the back of Hofer, trying to push past the Factory KTM rider to move up into second, as he did he made a mistake in the next corner, and dropped another four places.

This then left the door wide open for Renaux, who flew through to chase down race leader Guadagnini but ultimately ended up finishing in second for a one – two scorecard and the overall MX2 win for the MXGP of Great Britain.