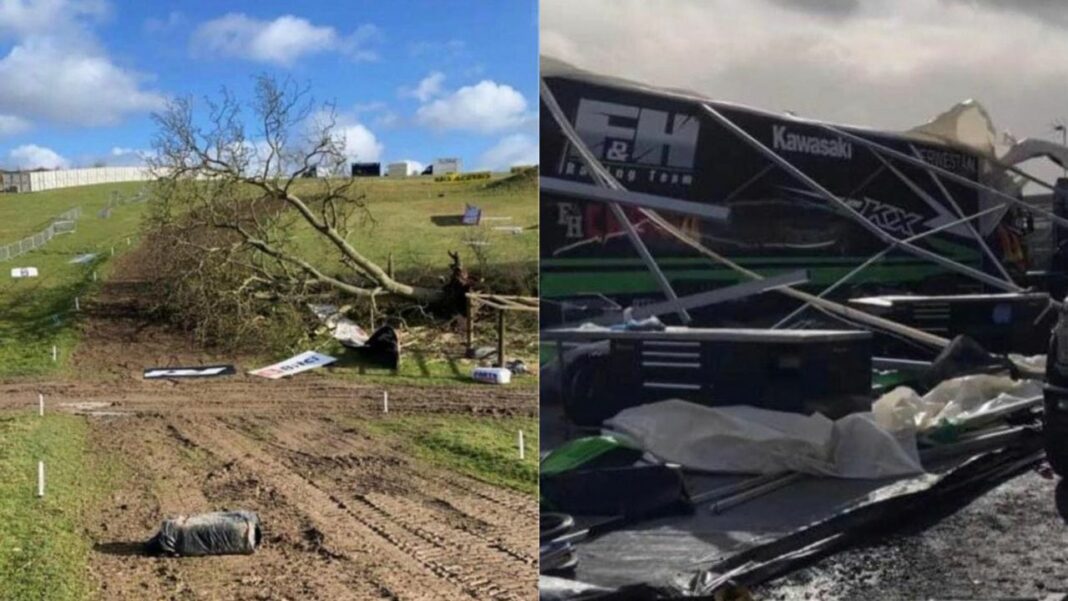 Britain’s MXGP round at Matterley Basin has been postponed to the 26 and 27 February after it was severely affected by storm Eunice that swept across the UK on Thursday and Friday with its focus on the south of the country where the event site is located.

With so many teams relying on awnings and semi-permanent structures in the paddock the effect of the storm and some of the highest winds ever recorded in the Winchester area caused significant delay in the normal set up preparations for the event and, for a number, extensive damage to equipment.

Speaking from the team hotel on Saturday morning as KRT staff waited to be let back on site, Team Manager, Antti Pyrhonen commented. “Like the fans, the whole team was looking forward to this first MXGP event, especially as it would be our GP debut for Kawasaki. Ben has had a great run up to the season start and we are working well as a team and anticipating this initial chance to show what we can do.”

“Having said that, the damage caused in the UK to property and vehicles is considerable and we feel for anyone who has been injured or who wakes up today to find their house or car damaged. The organisers at Matterley have done a great job keeping us informed and ensuring that our team personnel and anyone associated with the event are safe. It’s a regrettable decision but it’s the right one.”

“We lost so much time in the set up and there has been so much damage that it will take some time to regroup and be ready to race. We will return to our base in Belgium now and be back in a few days to compete on 26 and 27 February at this wonderful venue of Matterley Basin. We wish Steve Dixon and all the event staff all the best in the rebuilding process. We know they will work day and night to make it happen.”

With so much expectation focused on him as the lone rider for KRT at present due the Romain Febvre’s injury, Ben Watson was understandably frustrated as the postponement but also pragmatic. “The pre-season was good and it was all focused on funnelling me into my home GP at Matterley Basin. I wanted to race here as much for the fans as myself. Mentally I have been counting down to the first MXGP and now I have to reset my focus and start that preparation process again. But it’s not like the racing is cancelled, it’s only delayed by a week so the UK fans will still get to see the first GP event of the new Kawasaki Racing Team and me riding the factory KX450-SR.”

“The organisers have done a great job in tough circumstances and some teams like F&H Kawasaki have lost expensive awnings and equipment. My heart goes out to all those in the UK affected by this huge storm and, like KRT, I hope everyone can fix the damage and rebuild.”