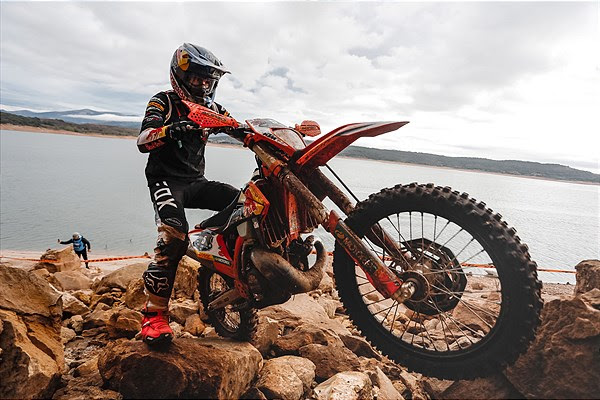 A Le Mans style start for the main event, with riders racing on foot into a cave to retrieve their bikes, saw Mani get away inside the top four. Riding calmly, the young German made light work of the initial technical sections and soon fought his way into second place a position he held for the first couple of laps. With traffic proving hard to overcome midway through the race, Lettenbichler dropped down to third, picking his way through the lapped riders in the toughest parts of the course.

Maintaining his solid momentum, and saving energy at every possible opportunity, Mani stayed within three minutes of second-placed Bolt for most of the race, with another two minutes to the leader. With rain falling, and the track becoming more cut-up and slippery, it was tough for the 23 year old to make up ground on the two riders ahead.

After two and a half hours of intense racing, Lettenbichler enjoyed a sizeable advantage to the fourth-placed rider behind him, and was able to safely bring his KTM 300 EXC TPI home in third after successfully clearing the famous hill at the very end of the course. The final result puts Mani second in the FIM Hard Enduro World Championship standings, just three points behind the current leader.

“It’s definitely been a cool weekend,” said Lettenbichler. “Yesterday’s race was really pretty awesome, and the riding was really good, so the organizers have done an amazing job. We were a little worried this morning coming into the main race because of all the rain we had overnight, but it’s turned out ok and the traffic wasn’t too bad out there.”

“I wasn’t feeling 100 percent last week and I think my fitness definitely suffered today, despite that, I think I rode a good race and I’m happy to finish on the podium again. The guys ahead were riding really well, and with today’s result it means I’m three points behind Billy going into my home race at Getzen Rodeo. So there is everything still to play for. I’m really excited for that one, and I’ll give it my best as always.”

Red Bull KTM Factory Racing will return to FIM Hard Enduro World Championship action in just under four weeks time when the series heads to Germany for the eighth and final round, Getzen Rodeo, on October 30.