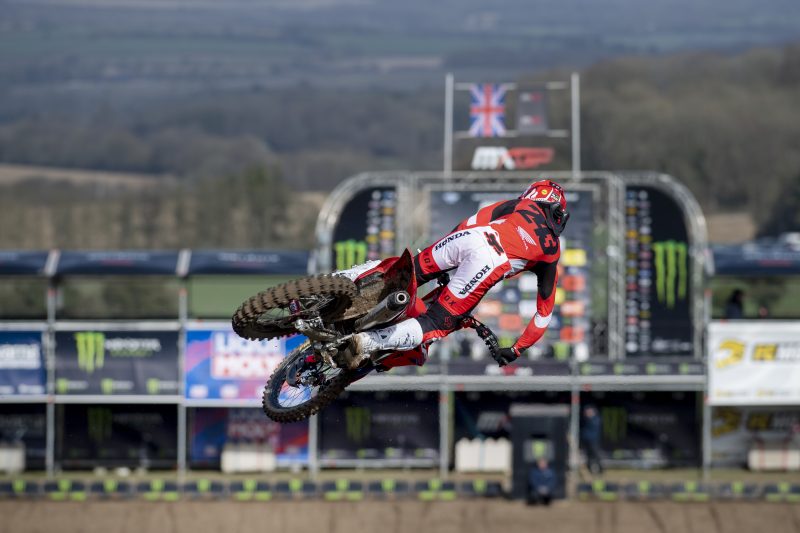 HRC Honda’s Tim Gajser claimed the first MXGP win of the day at Matterley, for the opening MXGP race of the day in Winchester.

Red Bull Factory GasGas rider Jorge Prado grabbed the Fox holeshot and lead for the opening lap of the first MXGP Moto of the day, as Monster Energy Factory Yamaha Jeremy Seewer followed close behind in second, as his team mate Glenn Coldenhoff sat in third place for the opening few laps.

Honda 114 Motorsports rider Ruben Fernandez had a better start, but then came together with SM Action racing teams Alberto Forato and crashed out of the race, and ultimately pulling in. Meanwhile Gajser and Monster Energy Yamaha Maxime Renaux battled between them, as the qualifying race winner moved up into fifth.

Seewer was all over the back of Prado putting the pressure on, as Prado makes a mistake allowing the swiss rider to fly through to take the lead early on in the moto. Gajser then made a move and pushed past Prado to move to second place, and started to chase down Seewer.

Kawasaki’s Ben Watson had a much better result compared to yesterday’s qualifying race, with an eleventh place finish, looking a lot more comfortable on the bike.

Heading into the last two laps, Seewer made a mistake crashing out of the lead allowing Gasjer to move through into the lead and win the first MXGP race of the season.