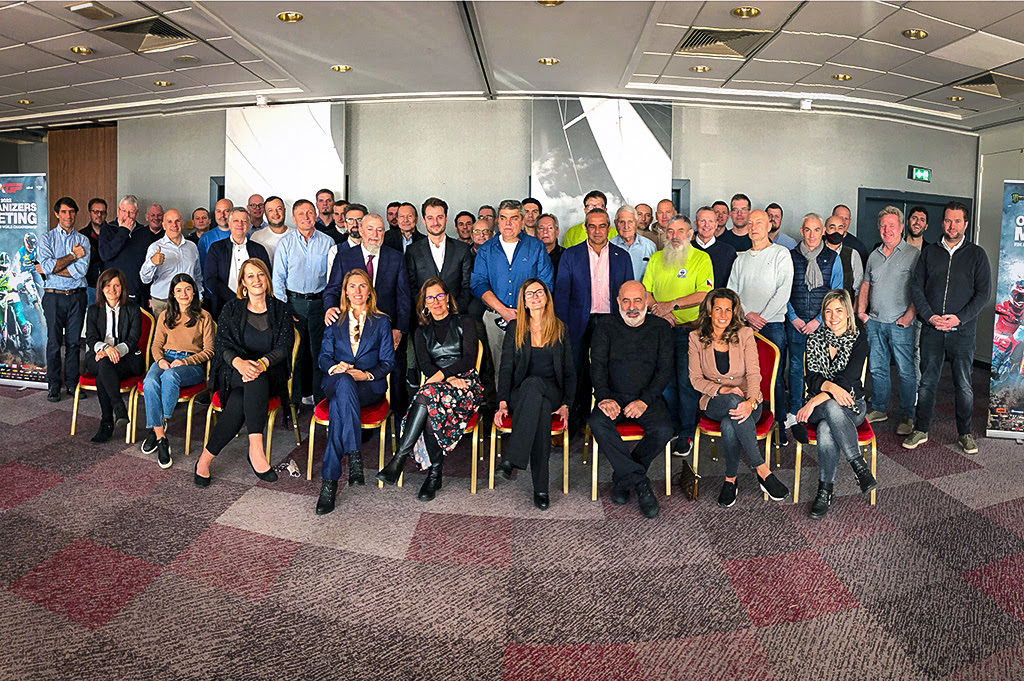 Over the weekend, the annual MXGP Organisers Meeting took place at the Marriott Hotel in Monaco, where organisers of the upcoming 2022 MXGP events gathered in order to get prepared for a great season.

Organisers of the 2022 MXGP rounds of Sweden, Orlyonok, Latvia, France, Netherlands, Germany, Portugal, Turkey, Great Britain, Trentino and Czech Republic and much more were present for the occasion to get prepared for another fantastic season ahead!

Infront Moto Racing President Giuseppe Luongo welcomed all of the officials and organisers to the event and shared his gratitude for the work carried out over the last two years: “Thanks to all parties, the FIM and the organisers, we managed to deliver one of the best seasons ever. I have worked in motocross for more than forty years and we have never had a season like this when the title went down to the last second. Thank you to the FIM, especially the FIM staff in the field of motocross for their excellent work, great support and partnership that we have had for many years. Also thank you to Infront Moto Racing staff because it has been two difficult years in terms of travel and organisation to work against the virus but despite this, we have made two wonderful seasons of racing. And of course without our organisers, the work that Infront Moto Racing has carried out would not have been possible and thanks to these efforts we have done together we could put on 18 races. You, Organizers, have helped to keep the sport alive on the top level and to be ready for re-start. We are very optimistic 2022 will be a normal year, if not we will ask you to fight again with us until we can arrive at this stage”.

FIM/CMS Director Antonio Alia Portela also thanked everyone for a fantastic season by saying “You’ve seen all the images shown what happened throughout the last two years but this year in particular, like Giuseppe said it has been the pinnacle of all motocross events so far. It’s been great to have three title contenders until the end. Of course, a championship like this demands a lot of work behind the scenes that most people cannot see because it’s not shown on TV. It goes without saying that without your collaboration and co-operation this cannot be achieved. Infront Moto Racing has put in a lot of effort to organise the calendar and making you understand that this way will be the best way to go about these events to safeguard the championship, it has been the right thing to do and the result have been incredible. I would like to thank all the organisers, you are representing all the people right behind you, all volunteers and those that come to help you, every little thing helps makes a difference. This is what we are also asking you for in 2022. Thank you very much”

The welcome speeches were followed by the presentation of the key departments of MXGP which included the aspects to focus on for the upcoming season. Each department highlighted the novelties and important points which included, paddock requirements, circuit preparation, infrastructure for medical centre, tv, media, marketing and more, including the return to the usual MXGP race format which features the support classes race 1 and qualifying races taking place on Saturday and the support classes race 2 plus the MXGP and MX2 races on Sunday. The presentation was followed by a an introduction of selected 2022 FIM Motocross World Championship venues which introduced the return of some of the favourite circuits to next year’s calendar as well as the comeback of the Monster Energy FIM Motocross of Nations to Red Bud, USA.

Then the FIM Representatives took to the microphone to speak on behalf of the FIM to overview some important points on the work carried out by the FIM onsite at each event. They thanked organisers for their co-operation over the years and gave them some more tips on how to make sure the events run at the highest level.

The meeting was concluded with an official presentation from MXGP official ticketing partner Platinum Group, followed by the official 2022 MXGP teaser video, which declared the 2022 season countdown.

Overall, the meeting was a great success with fantastic feedback from the organisers which allowed us all to go through numerous details together in order to prepare for the upcoming season.