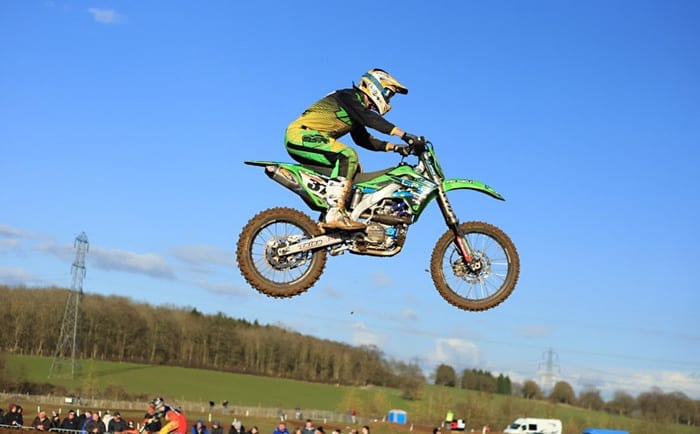 Culham Park near oxford marked the scene for the opening round of the all new MX Nationals series. Both Apico LPE Kawasaki riders Gert Krestinov and Erki Kahro were hoping to start the new series off with a strong performance in the Pro Class, while youth rider Ben James aimed to start well in the MXY2 class.

In the qualifying sessions both Krestinov and Kahro lined up in the same group, and produced strong lap times to qualify in third and 17th places respectively in their group. In the MXY2 class, Ben James qualified just outside the top 15 in 17th place.

The opening Pro class of the weekend saw drama as soon as the gate dropped with MX2 rider Erki Kahro colliding with a number of other riders resulting in him retiring from the two day event with a concussion.

Meanwhile Krestinov suffered a poor start and had to work his way up from 17th on the opening lap. After a couple of laps Gert had progressed through the pack to the top 10 and continued to push forward. At the halfway point of the race Krestinov had climbed forward to fourth position gaining lap by lap on third place rider Elliott Banks Browne, unfortunately Krestinov ran out of time to make the pass for third.

The second Pro class race on Sunday saw Krestinov make a slightly better start and rounded the first lap just outside the top 10. Within six laps Gert was into fifth and pressing Bradshaw hard for fourth place. Once passed Bradshaw, Krestinov hunted down Banks-Browne once again to finish half a second behind at the chequered flag.

The final race of the weekend saw Gert start outside the top 20 however quickly battled his way into 10th place at the end of the first lap. Krestinov continued to carry speed shown in the two previous races to finish in fifth place. Gert’s three consistent results saw him finish third overall on the day taking a well-deserved podium position in the MX1 class.

Krestinov said: “It’s been a good weekend, I came here feeling good as I always go well around this track. In qualifying I produced a third fastest time in my group so that gave me a good gate pick for the whole weekend.

“The first race I rode well to come from 17th to fourth but I’m fed up with my poor starts. The second race I struggled with my rhythm but still rode okay to come from 10th to fourth again and then in the last race the sun was really low and it was hard to see the ruts, so I took it steady and finished fifth and stayed safe. I’m really happy to have finished on the podium in third and now looking forward to the coming races.”

On the Saturday, youth rider Ben James suffered with a bad start but managed to work his way up to 13th place. On the Sunday James’ starts improved which meant he was to round the first laps consistently in the top 10. Sunday’s three results saw James finish 15th, seventh and ninth in the final race, following a mid-race crash. James strong results saw him finish 11th overall only one point behind the top 10.

Ben, said: “It was a really good start to the series, I had a okay qualifying with 17th then in my first race I didn’t get the best of starts but came through to 13th. In my second race I got a really bad start and made some mistakes on the first lap but managed to get back to 15th. The third race I got a good start and was inside the top 10 and worked my way up to seventh which was my best result of the weekend.

“My last race I got an even better start and was eighth on the first lap and worked my way up to sixth and was in sixth for a couple of laps but slipped off in a corner and restarted in around 15th and got my head down to pass as many as I could, to eventually finish ninth and this gave me 11th overall, only one point off 10. I am still really happy as our aim for this weekend was top 15.”

The team now have a two week break, before the next team outing at Lyng, for the second round of the Maxxis ACU British Motocross Championship. Krestinov and Kahro both hope to continue their recent pace to progress and improve their current positions in the championship.

Team Manager – Steve James, commented: “This is a new series for everybody and I think that the organisers have done a really good job. The racing all weekend has been really good and I cannot fault them. For us as a team it has been a really great weekend, we finished third overall in the MX1 class and that is great because it gives us a solid starting point

“Gert was riding well all weekend and we just need to work on his starts and then we will be battling at the front from the start. In MX2 it wasn’t a great weekend for Erki as he crashed on the start straight of the opening race and suffered a concussion. In the MXY2 class Ben James finished 11th overall and that is a great result and a big step up from his results last year. Overall I’m very happy for all our sponsors, Apico, LPE, Maxxis, Kawasaki and each and every one of our product sponsors.”