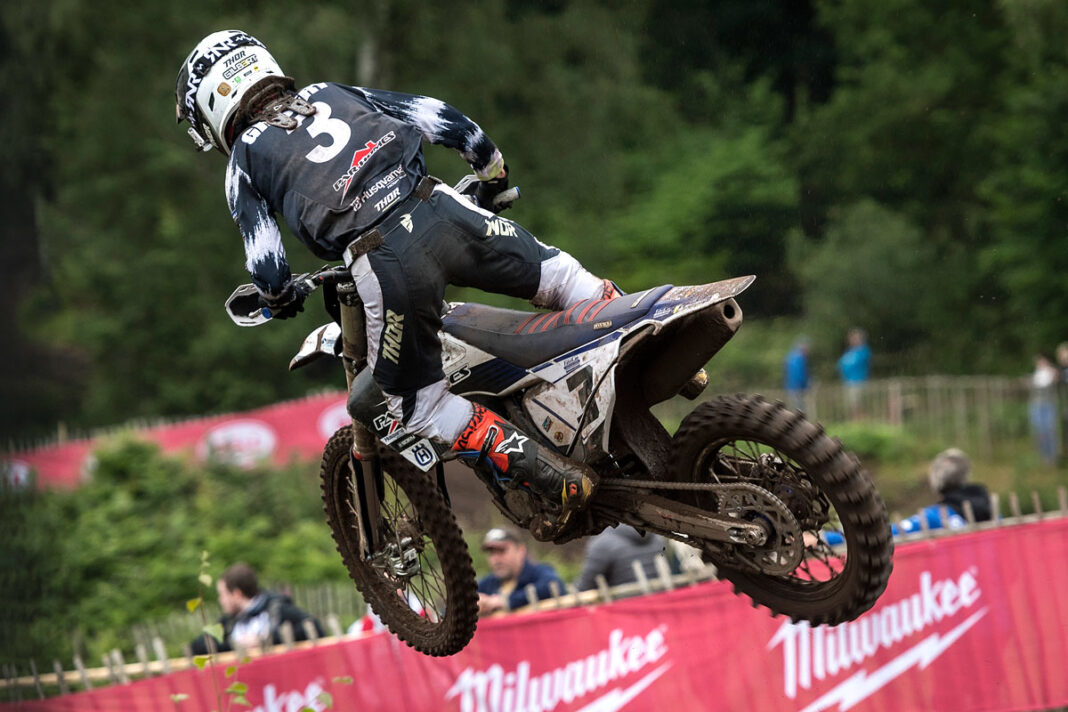 Par homes Husqvarna MX1 rider Josh Gilbert made a return to the paddock this weekend, for both championships with Saturday at Foxhill, and Sunday and Hawkstone Park.

Speaking to Josh post race on sunday, he told us how the return to racing had been, and how it was not what he expected.

“I didn’t really know where I would be at Foxhills, as I was only back on the bike for three weeks,” said Gilbert.

“It’s weird because I had only rode with one other person that had done the british championship before then, and it was so hard to gauge where I was really. I felt like I was feeling pretty good but two weeks before the lead up to Foxhill we went and did two weeks training in Belgium, and to be honest I think that’s the best thing we could of done. Over there the tracks are much harder and you can get open sessions so it’s much easier to get the training in.”

“By the end of the week, we finished on the tuesday before foxhills, and we went to a hardpack track and I was actually feeling really good with myself, but it was still difficult as I still didn’t know where I would be.”

“I had six months completely off the bike, because after the last MXGP in Trentino in 2020 I had a month off to completely recover from the year I had had, and just as I started to pick things back up in the middle of December, I landed really straight legged off a mountain bike and my knee over extended. My knee just exploded, so it came back that I had completely snapped my ACL, and badly torn my meniscus which I had to have removed on one side, so I ended up getting surgery in the end of January.”

“I must admin the first two times back on the bike were sort of a bit weird, it was more my eyes adjusting back to the speed factor with everything coming at you so fast. Once I got over that I was ok, I managed to keep training right up until my Operation, so obviously for the first month it was a little bit slow. But I feel like I couldn’t of done anything more to get back as quick as I have really.”

Speaking about Sunday’s racing and the change is pace, Gilbert said, “In the first lap of qualifying, I thought il tag on the back of Shaun and I left him a two to three second gap, and I actually caught him up within the first half of the lap and I thought bloody hell! I actually might be going alright here.”

“Across both days I can’t ask for much more really. I’ve already missed a round of MX Nationals so I want to take it race by race, and I actually hate Hawkstone as it is so, going into the ten minute free practice this morning that was hectic! First moto I really struggled to be honest I just felt like I was riding around, and the second race I literally felt like falling asleep I was that tired. It’s been tough so I just paced myself, I didn’t say anything to anyone but I was actually just hoping to make it into the top ten, but I actually finished fourth overall so I can’t complain.”