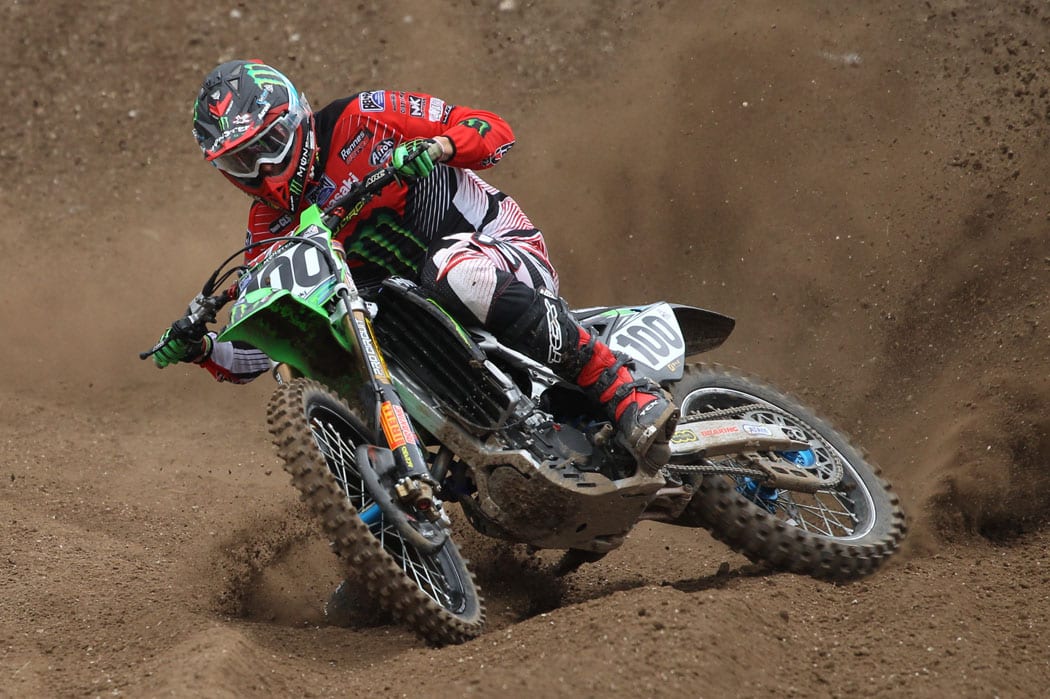 World exclusive tests don’t come along all too often so when the opportunity for a mid-season ‘test of the year’ came our way we grabbed it with all sets of hands.

Getting to ride Tommy Searle’s full-on CLS Monster Energy Pro Circuit Kawasaki took months of planning and scheduling to fit in with the team’s busy race and testing schedule. Permission and approval had to be gained from the team’s top brass as well as a nod from the good ole US of A.

But all this simply makes the whole experience even better and when Monster Energy’s Jamie Coppins told me that CLS MX1 team manager Rene Ebert was on his way over from the team’s base in Holland I was getting a tad giddy and the excitement-o-meter was off the scale.

For a test of this magnitude I needed a wingman and a man capable of giving a bike capable of dealing with the full factory machines a next level workout. Tom ‘TC’ Church was no stranger to mixing it with the factory guys in MX1 onboard his Molson Kawasaki ‘non factory’ 450. As such, TC was my choice as co-tester on this one as his appreciation and experience of the level an MXGP bike must work at is immense.

As we are all well aware Tommy is in his rookie year in MX1 and as such the team and Tommy are all on a steep learning curve. The test came at the perfect time as Tommy has found his feet and his challenge into the regular and hyper competitive top five in the class is to be congratulated.

The CLS connection with Pro Circuit comes from chief technical guru Harry Nolte who has a strong relationship with Mitch Payton. The opportunity came about after discussions on developing a fully Pro Circuit-supported European based team and that’s when CLS Monster Energy Kawasaki developed into an instant GP force in MX2 with Tommy smashing out victories.

I sat in Mitch’s office at PC HQ in California a couple of years ago when the CLS team were going into their second year of the connection and with true Mitch style his burning desire for success was evident during our chat. It is fact that Mitch is 100 per cent involved in every single aspect of his team effort in the States and I know he finds it difficult when his engines and equipment are being used far from his all seeing eyes. This is a massive boost for me to see the CLS team working strong and continuing to grow as this shows the trust from Mitch and the strong relationship Harry, Rene and the other top guys in the CLS program have with the Pro Circuit boss.

The technical program for the MXGP team starts at the beginning of the year with a trip to Pro Circuit HQ to discuss and work out the Tech Specs of the bikes. The special parts are then manufactured and modified before being shipped to the team base in Holland. As with any Pro Circuit part available the quality of engineering is amazing.

The parts made available to CLS go a step further as the very best equipment and highly tuned motors are made available. The internal motor specs are obviously a closely guarded secret because I got shutdown during my interrogation of Rene and Harry. This is to be expected as quite frankly it’s none of my business…

The suspension on the CLS bikes is also to the level most people can only dream of. The factory supported and approved Pro Circuit Showa SFF air forks and super trick shocks the team use are only available to a very select few. I can stand and look at engineering excellence for hours and when the thoughts turn to riding bikes of this calibre the excitement and respect for the hundreds of hours that go into the machinery grows.

I find that a familiar track and conditions make for instant rapport with machinery so Rushmead Race Park was prepped, watered and made ready for the arrival of CLS, TC and myself. Obviously in the run up to a test like this the thoughts are on what you conceive the bike to be… A fire breathing weapon sprung to mind a few times as surely only that would be good enough to take Tommy into battle with the other big guns of MX1 but it was time to find by riding the exact bike that Tommy raced in Finland…

The first lap of a test on any special bike is a mind blowing experience and trying to enjoy the 450 in the early laps was great. The mind works overtime in trying to work out the feedback from every part of the bike as it is guided around the track. It was in this early and steady cruise on the bike the smile began to grow inside my Shoei. Could Tommy Searle’s race bike really feel this good?

I really cannot describe just how good this bike felt from the instant I climbed onboard. As you would expect absolutely every part felt perfect from a control point of view. In order for a bike to compete with the best it must perform as a package. The initial laps spent getting the feel for the bike made confidence grow as the bike seemed like it was glued to every inch of the track.

The power delivery in the race setting which Tommy uses for the majority of time is incredibly user friendly for finding traction. Roll-on power from zero was controlled and a pleasant surprise as the expected animal was not at all in evidence.

When a motor is this smooth and full of useable torque all it needs is an awesome chassis to complete the package. Well the chassis did not disappoint and the more laps turned on the bike the better it became. As a test rider, personal touches will always play a part in my mind. The only personalisation I would do with this bike would be a slight change in handlebar clamp position to the rear setting. This is simply a turning style process and with the modern GP tracks generally having ‘here you go guys, turn off this manufactured berm’ style the flat turning style of having the handlebars further back in clamping position and rolled back a little is not necessary for all riders.

The fork and shock action was an even greater surprise to me than the smooth control offered from the motor. Every millimetre of travel and action from both the fork and shock offered support and fantastic feedback. The feel no matter how hard or smooth the bike was ridden was great. The bike went beyond anything I could have imagined as it was not possible to get it to misbehave.

The track went from grippy and ripped sections to hard and slick back to grip, on to dust with sharp edge and rolling bumps all on off camber, flat and positive camber turns. Traction from the front end was awe inspiring as the Pirelli pushed into the terrain through the smoothest action front forks I have felt to date. This is what development and technology is all about. The proof is in the ride and the work and detail of this bike shows in how it covers the ground and the ease of working with a very tuneable bike and fantastic rider who knows exactly what he requires from his machine through communication in test and race conditions.

As the day continued and more and more laps were pounded out in my quest to find fault neither myself nor TC could produce any negatives and not even the tremendous down draft from the MJC chopper could unsettle the 450 on track or in the air. I have to say if I was asked to describe the perfect bike set-up for a rider coming from MX2 to MX1 allowing the rider to grow in confidence, experience and without fear of the machine then the CLS Pro Circuit Monster Energy Kawasaki would be my blueprint.

“I was a bit nervous about testing this bike. I guess I had expectations of it being a rocket ship with rock hard suspension set up for the trials and tribulations of GP racing by one of the fastest athletes in the world and not an out of shape ex-GP racer with a penchant for a full English most mornings – but that’s enough about Geoff…

“The bike looks beautiful and has two mapping options available by flicking a switch on the bars – one for the start of a race and the other if you feel tired halfway through. Also there is a dial with 10 mapping options in front of the fuel cap – one being mellow through to 10 being the most aggressive. I started by requesting all switches and dials be turned down to mellow but surprisingly the bike wouldn’t run so the option was to put everything to 10 and crack on.

“Straight away I felt at home on the bike. The engine was surprisingly mellow but extremely easy to ride. It pulled gears easy and was full of bottom-end torque. The shock was hard but certainly safe and not once did it kick me about. I found the forks surprisingly soft on landings but mainly braking hard into corners. I’m sure that balance suits Tommy – it just didn’t suit me. One thing I found exceptional was traction on flat corners and the ability to steer with the rear wheel – it drifted perfectly but never broke free.

“I also played with the mapping switch on the bars which surprisingly didn’t make any real difference. I really expected an aggressive start and beginning of race map and a much mellower map for the rest of the race – something I would expect is possible with modern fuel-injected bikes.

“Overall the bike was fantastic – well put together and extremely easy to ride and go fast on. Maybe as Tommy develops on the 450 they will look to make more of the power available to get him out of the gate that little bit better.”