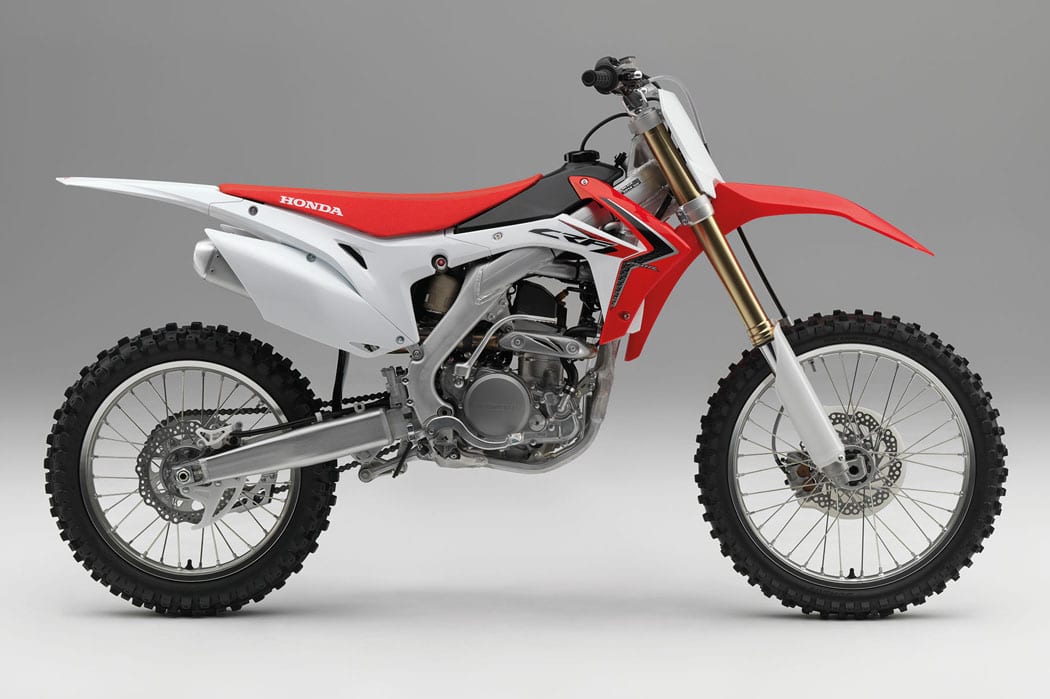 The setting for the launch of the brand-new sparkly CRF250R was the gnarly circuit of Loket in the Czech Republic – over the GP weekend. With the Russians having close ties with this country there was definitely something in the water for Honda and the World Motocross team this weekend as both Bobryshev and Tonkov climbed on the podium – the pair of them picking up a bronze medal on a track that was as rough as a Baja’s backside!

After watching the best riders in the world bounce and in some cases buckle, Monday morning seemed daunting and distant. However, after some very welcome overnight rain, some touching up with the machinery and some gorgeous sunshine, Monday morning was actually much brighter than I first thought…

It’s really exciting to be testing the new 250F as it would seem that only two manufacturers have twigged on to the mahoosive benefits of mass centralisation. Granted the benefits are greater on the 450F but moving as much weight as possible lower and to the centre of the bike certainly improves cornering and jumping possibilities. Add on top that the fact that having both the 250 and 450 sharing the same components – apart from the obvious – then all the manufacturers are saving wonga which as the Japanese would say is weally wood.

As with the 450 last year if you have any parts you want to transfer over from your 2013 model CRF250R then you can just about forget it because this bike is so new that the forks, front wheel and brakes are all that remains the same!

The first thing you notice with the 2014 250F is that it has the same bodywork as the 450 and has also reverted back to the dual muffler set-up. I’m sure if the engineers had come up with the term mass centralisation back in 2006 then its possible the twin cans might have stuck around longer on these bikes but now with the pressure of reducing noise and maintaining or increasing performance its back.

As well as the trick looking rear-end you’ve now got the stronger, reinforced front fender too. Peel away its new wrapping and you’ll find that the sixth generation ally frame has less flex due to the frame spars sitting lower on the steering tube which also lowers the centre of gravity to help give that sharper feel for cornering and jumping.

The frame cradle is also adapted to fit the smaller motor – when compared to the big fo-fiddy. The sub-frame is also slightly different to accommodate the twin pipes – it’s lighter and houses a new smaller airbox that reduces the internal pressure creating a better flow balance between low-to-mid and high rpm. As the wind passes through the new airbox it is met on the other side of the throttle body by Honda’s unique dual squirter.

Honda is aware that they needed to produce a bike with a stronger motor so this is the starting point of producing the elusive extra power! To produce better initial throttle response and improve the power and torque the guys in white coats have come up with Dual Stage fuel injection timing which basically means that there are two squirts of fuel pumped in to the engine on each single stroke so as you open the throttle you get an early pulse of fuel followed by the normal pulse which arrives on time as usual. Clever eh?

As your two squirts enter the cylinder head, the fuel/air mix races through the reworked ports even slicker than a Joey Essex haircut and explodes with a bang as it’s squashed between the reshaped combustion chamber and new high compression piston. This extra bang is putting more power through the crank and ready to tear up the gearbox so the gears and dogs have been beefed up which means they’re now 3.5mm wider and your final drive sits further from the centre of the crankcase and your 2013 rear wheel becomes redundant as the sprockets no longer line up!

Elsewhere on the bike you have the steering damper that remains and the radiators are smaller and lighter too. The fuel tank has had a boost too as it now holds over half a litre more jungle juice at 6.3l.

Interestingly, if you pay close attention you’ll notice that the outlet diameter of the silencers is now the same – fact. By adding a spacer where the pipes split, the flow of gasses change and the pressure and flow are equal. This means that even now you know they are the same size holes, when you look at them it still makes you ask yourself ‘are you sure they are the same size?’.

It is also claimed that by having the silencers shaped like a diamond mud falls off them lots easier and keeps extra weight down when you have the pleasure of skidding around in the slop.

The swing arm is now the same as its big bro. The bigger, chunkier version gives better traction out the gate and more rigidity when riding and this is connected to a 14.5mm shorter and 70 grams lighter rear shock that is fitted lower in the frame and gives a better centre of gravity.

At the front end Honda have stuck with a conventional spring Showa USD forks. For me it just doesn’t add up that they make such an effort with the complete bike and then leave the forks especially when the 450 has tried and tested air forks!

Out on the track my first thoughts were ‘aarrrgh, what’s going on?’. The track was slick, bumpy and only graded in parts and the bike felt as rigid as my 1997 CR250 with its new aluminium frame while the forks were as soft as butter as they literally fell through the stroke and then went harsh at the bottom. This was the first session out on the tough track so we’ll put those feelings to one side for now, make some adjustments and start again.

Sure enough the next outing on the track was much better and after setting the shock preload to 105mm and going only two clicks harder on compression and two clicks slower on rebound on the forks the bike became balanced and more suited to a 92KG giant on top of a standard 250F!

With regularly riding a 2013 CRF450R I was at home with this bike straight away. The slim, strong, straight-edged bike gives a positive and direct feel when riding the bike and like its bigger sibling this machine turns on a pinhead with a really light feel to it. And although there wasn’t really any jumps for me to scrub the bike pulling it about through the rhythm section and correcting mistakes was easy because the mass centralisation makes the bike feel as light as a feather.

The Loket circuit is littered with plenty of tight turns and short straights leading up to obstacles which really suited the power delivery of the 2014 motor. As I was riding around and became more accustomed to the lines I was using I would think to myself ‘come on Ed you are riding a 250F… thrash it – rev its nuts off’, because that’s how you are supposed to ride 250Fs right?

But this bike has more torque than Jeremy Kyle and it is really strong and smooth right off the bottom and in to the mid-range which makes it easy to pull higher gears and most definitely reduce the need to use the clutch. You get a lot of power down to the ground as you build speed up around and out of the turns with no dramas, no fighting or wrestling with the bike – just firmly planted, direct drive.

On the flipside the top-end is less impressive. The motor can climb to high revs without signing off – which is great – it’s just that it feels a little empty compared to the huge oomph you get from the bottom and mid-range power.

I didn’t get chance to use the top-end setting as I chose to go with the torque setting first because that is where the most power is. If I could make it even stronger in this area I would be able to generate quicker speeds out of the turns to clear the jumps and the extra strength would help me when hooking up the extra gears. This worked well and built on the bike’s strengths and the top-end was a still little empty.

Finally I tested the map most suitable for aftermarket pipes and was amazed by how much changing the mapping can make a difference. The power was as strong as with the torque setting and the void was filled long enough into the top-end to shift gear any time you liked without overloading the motor. With the standard setting I would just leave the bike revving but with this setting I could comfortably change gear and keep it in the higher rev range.

Learn to ride this bike in the correct rev range – as in stop thrashing the tits off it – and you’ll get to ride a mega bike and save yourself some maintenance costs as well. But if you are happy wringing its neck then get yourself to a local Honda dealer and get a different ECU map installed…