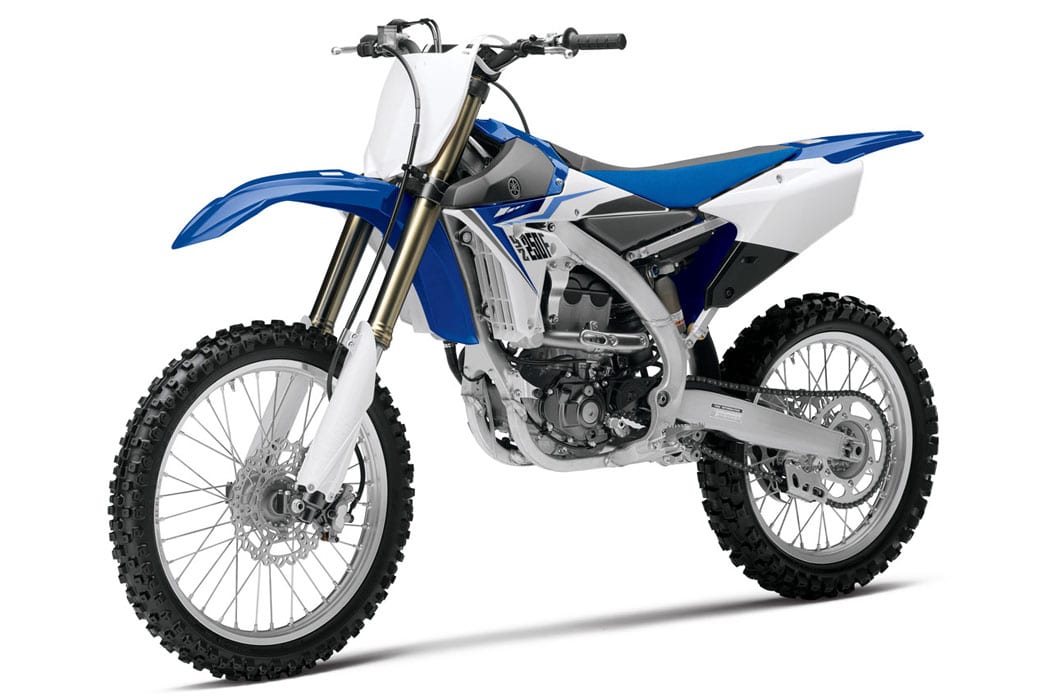 After spending four years developing and refining the revolutionary YZ450F with its reverse engine layout Yamaha has followed suit with a brand-new YZ250F ‘nipper-ripper’ for 2014 that also has the engine fitted in the wrong way around. Could this machine be the bike to rock the MX2 class in 2014?

Going on looks alone it’s made a great start. With sharp, straight lines and its performance and ergonomics maxed out the big question is will a reverse 250F motor perform better than its predecessor? Well, that’s probably not all that hard to do…

The test track chosen for this test is mostly hardpack with loose dirt on top in places and plenty of fast straights, short hills, tight and open corners and a variety of jumps. It’s a great circuit to find out what this new bit of kit has to offer – and it is a very new bit of kit! I n developing the reverse engine layout the first thing to go from the dinosaur machine was the carburettor. The new bike gets rid of the old and it’s in with a new Keihin 44mm throttle body that has a 10-hole injector which gives a better fuel supply to the motor and increases the top-end performance.

This bike’s ECU pick ups information from the intake air pressure, air temperature, throttle position, crank RPM and coolant temperature, just like its big brother, and you can adjust the fuel injection and ignition timing to get the best power output for you with the Yamaha power tuner. The standard setting has already increased the engine performance and throttle response. The ECU has been relocated, along with just about every other moveable component, to a more central position on the bike, as the importance of mass-centralisation is realised!

Inside the motor there are new 31mm intake valves, a new two-ring piston up and a different crankshaft design. This is carburized (heat treated) to provide less friction and the crank pin is reduced by two mm, to improve durability and engine performance. There are now two 25mm exhaust values rather than three and by dropping the third exhaust valve there is a weight reduction and fewer parts to go wrong which is always a good thing! Continuing with weight reduction, this motor finally has a wet sump so there is no more oil tank and a 25 per cent less oil which again saves weight and also keeps a little more in your pocket – as you use less oil!

I prefer the exhaust layout on the 2013 bike (over the 2012 450F) because the hot pipe is now kept well away from the rear shock and it is still going to be really hard to damage the header pipe! This layout improves the mass-centralisation and offers the opportunity of variable diameters as the pipe is made up of three parts. Also, because of the header-pipe’s extra length the aluminium silencer is closer to the centre of the bike and is almost reminiscent of a two-stroke back-box!

Of course when you produce a motor which knocks out more power then the transferred load is greater. This means that the gearbox and clutch have had an upgrade too. Along with the new design cogs, the gear shaft diameter has increased by two mm with a new shift lever fitted to it and the final drive is now one tooth smaller on the back to suit the new engine characteristics.

The clutch needed to be stronger so the new design includes increased spring rate and pressure plate rigidity. Just like its big bro, Yamaha have been showing off about the Teflon-coated clutch cable – it’s a lot to shout about for a consumable part! Regardless of that, if it makes it easier to pull the clutch in then I’m a fan.

So, as well as spinning the engine around 180 degrees, there have been some major mods to this new generation 250F. One great thing about this bike is that no 250F rider will have to endure the huge tank/airbox/rad shroud abuse that Yamaha 450F riders have been subjected to over the last couple of years. This little beauty has the same ergonomic upgrades as the new 450 and that means you get an easy-to-change, conventional style air filter, slimmer rad shrouds and no protruding gas cap to bang your dangleberries on!

In fact, the whole tank/air-filter has been jigged around quite a lot to make maintenance easier, reduce weight, improve mass-centralisation and increase engine performance. The air ducts are now one piece and blow-moulded to reduce the amount of roost getting the filter dirty. Plus, with the new slimmer design you only have to remove a few bolts to replace the foam filter.

To achieve the slimmer design of the radiators, a row of coolant core has been removed, which gives a massive reduction of 8.8mm on each side. With this slimming down, the engineers have been able to increase the fuel tank size from 6.4l to 7.5l – a massive 20 per cent – and they have still had chance to move the tank lower down into the frame which improves…yes, you’ve guessed it…mass-centralisation!

It is also possible to flip the tank around 180 degrees and rest it on the sub-frame with the fuel pipe still connected giving easy access to the ECU, fuel pump, ignition coil and cylinder.

The target for the new chassis is to reduce weight, centralise mass, improve rigidity and manoeuvrability as well as straight-line and bump stability. The rigidity has come from a mix of forged, cast and extruded aluminium parts, of variable thicknesses, and engine-mounted brackets which are steel for the cylinder head and aluminium at the lower front of the motor.

Eric Eggens – the former GP front-runner – explained that he has tested many different frames and engine brackets to find the optimum combination of rigidity and stability. “There are so many different configurations. Some work for us and then not for the test riders in America and vice versa. It has taken a lot of riding to get these new settings!”

The sub-frame has been altered significantly and done in a way that allows the silencer to sit snug and close to the motor. It might look a bit funky, especially with the new side panels, but the practicality certainly outweighs this.

As we went through the presentation on all the new features of the bike, I was a little disappointed to find out that this machine, fitted with so much up-to-date technology, has been fitted with normal 48mm forks, with springs in. The advantage of air forks is nearly 1KG reduction in weight but with SSFs it’s half that. On an all-new 250F this weight reduction would have been great. I guess they now have something to update for next year!

One thing Yamaha have done though – to improve rigidity – is increase the front axle from 20mm to 22mm and the newly designed, rubber-mounted handle bar clamps have increased rigidity too. The rear shock has a harder rear spring and I love the fact that someone has given some thought to the end user who adjusts the settings on the bike as the clicker screw is set at 45 degrees back from the usual position so that it is easier to get your screw driver in.

Attention to detail is what I like about this and it was carried through to the track where the preload on the shock was set up for the specific bikes that we were riding. That meant my bike was set to the ‘big bloke’ setting and one of the first things I noticed, as I threw my leg over the bike for the first time, was the seat height and shape. The seat felt high, flat and square edged which was comfortable and you can get so far up the front that it is no longer an issue of where you can sit because you could easily sit at the bar pad if you wanted to – which you don’t so it doesn’t matter!

The handlebar/seat/footpeg position feels very natural…just like on the four-fiddy. Straight after starting it up and getting onto the track the bike sounds quite raspy – a distinct noise that is created from the air filter being at the front of the bike. It is, however, a different noise compared to other bikes with air boxes at the front and depending on the mapping there’s variation in how much of the fluttering sound you get. This is in no way a bad thing – I’m just saying that the bike sounds a little funky compared to any other 250F!

During the first riding session on this bike we used standard settings for both suspension and the engine and you realise just how easy it is to ride. It does everything well. It’s plush and smooth and is a bike that gives you confidence from the outset. The brakes are like the 450F in that they are a little spongy but at the same time this gives a good feel for how much pressure you are applying. When you are squeezing them fully in, though, it would be nice to have a little more power – nothing a bigger disc or braided hose couldn’t sort out.

The power in standard trim provides a smooth transition from the low-end to the top-end and revs cleanly through each stage. A flick of the clutch out of the turns and the bike pulls nicely off the bottom and in to a strong mid-range and a good top-end. The power delivery is so smooth that it hides the fact that there is plenty of power hauling my big ass around the track. The last time I rode a YZ250F the motor signed off almost as soon as it got in to the top-end power so it was great to feel this motor keep on going well in to the upper echelons of the RPM.

The only modification we made to the suspension was to go a couple of clicks harder on the shock rebound as it was kicking a little on a few of the jumps that had short, sharp take offs. Once changed it felt much, much better.

The bike handles great in all areas – it turns easily and is stable in the faster turns and it feels fantastic in the air due to the focus on mass-centralisation. It is easy to throw about, which is great for whips and also for correcting the bike if you get a little outta shape!

One area that I think it could have been even better was over the braking bumps and going into the first part of the turn when you have the handlebars turned with the most load on the front end. When you push the dirt with your front wheel there just seems to be a bit of flex that leaves you ever so slightly unsure of how the wheel is going to grip.

After the second session we changed to the mapping that was most suited to this fast track and the transformation was awesome. With the advanced setting there was more top-end power and a snappier low-end which brought the bike to life. It went from a really fun bike to ride, to a proper racing machine while keeping the handling characteristics at the same time. With this bike Yamaha is definitely back in the game!