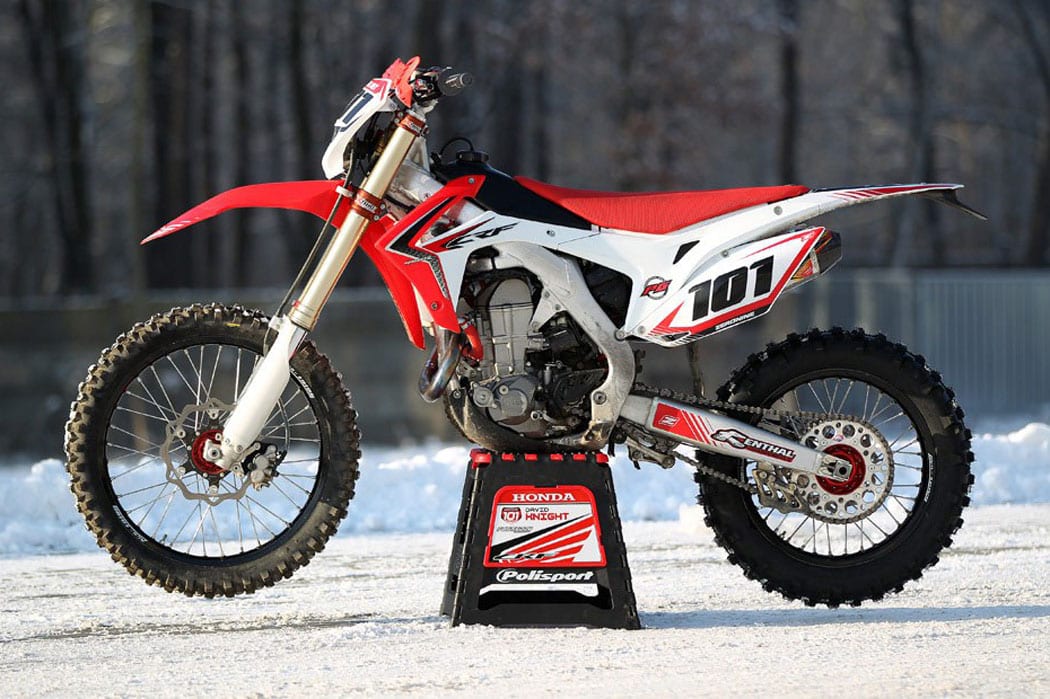 Godfrey gets a grip of Knighter’s world championship weapon…

When the chance comes along to test a bike that normally does battle in the Enduro World Championship in the rather large hands of the legendary Mr David Knight then it must be taken. DK is well known for his hard work towards getting his machinery perfected and may sometimes go beyond the call of duty in his search for that perfection. This attention to detail and determination has brought him his numerous world, AMA, British and extreme enduro titles over the years.

The large man from the Isle of Man is sometimes tough to work with on the mechanical side as the word ‘sh*t’ is sometimes overused without a thought. I personally like this outspoken side to the man as he has the mechanical and riding ability to match any human on the planet.

So, that being said, when Knighter left the KTM factory fold after a couple of tough, injury hit years and decided to go it alone on Honda machinery it was no surprise to me. This guy knows what he wants and the fact he is investing in himself is to be admired. This is not a blow smoke up his ass statement, it is simply an observation of a man who lives to race and ride bikes with an unrivalled passion for the sport of enduro.

I know many riders who wouldn’t think about riding a dirt bike if it meant they had to get their hands dirty. Knighter has won more than any of these guys and is still driven to work every hour of every day for success. This was proven on the day of the test as the Big Man was hands on in setting up the brand new race bike we were testing. Knighter’s mechanic ‘Greek’ was left handing the tools over so he could get on with the set up at times during the morning. None of this is in any way disrespect to his or any mechanic he has had but he likes a hands on approach. Call it old school or whatever but I grew up watching riders like road racer Joey Dunlop working on their own bikes so they knew everything was as good as it could be in their minds.

Chatting to DK and Greek it’s clear that the CRF450 is a work in progress as improvements and tweaks are all part of the DK psyche. This bike is developed using parts and services pretty much available to all of us. The skill to developing any bike of this level of performance is putting the package together for optimum performance.

Looking around the bike the class is evident. The clean simple look from the graphics makes a statement and the personalised seat cover over the 12mm higher seat foam flattens the cockpit and gives the bike a great look.

This bike is of course all about performance though. This performance can come with a lot of style. This style comes from the personalised FMF exhaust system. The bike runs with a specially designed medium and small insert in the twin tail cans for smooth power and noise level reduction.

Power is provided from the super smooth motor which is modified with a slight change to the ignition mapping to provide a slightly smoother low down power. The only mechanical change to the motor is the Hinson clutch parts. The clutch is operated through a hydraulic clutch retrofit using a Brembo master cylinder. DP brake pads and discs are used to slow the red machine and the fully trusted Talon wheels provide the strength to cope with the punishment and abuse coming through the Metzeler FIM Enduro tyres and mousses. Keeping the CRF running cool are Samco Silicone Hoses and the superb Evans Waterless Coolant which the team have tested extensively. The Evans is a revolution in cooling fluid and helps the motor run stronger for longer even in the toughest of conditions.

As you would expect with a bike to rival the factory machinery, the suspension has to be spot on. This is the part of the bike the team work on a lot with Mark at OC1 suspension. The KYB air ffork comes from Technical Touch before the OC1 team put the settings into the kit forks and modified stock shock.

DK buys his Carbon fuel tanks from Italy. The CMT tanks take an extra 1.5 litres of pump fuel. Renthal provide the Twinwall bars, medium compound grips and the final drive combo of 13/50 which amazingly is used by DK in everything from World and SuperEnduro to Enduro X at X Games. The rest of the spec of the bike involves protection and practicality from TM Designs, UFO, Enduro Engineering, GeCo Special Parts and all lubricated and kept in tip top condition with Rock Oil products.

Every one of these products chosen by the team has to perform and with the experience of both DK and Paul Eddy involved in putting the team together there is a wealth of experience and testing to count on. To say I was excited to get on the bike would be an understatement. When a bike as good looking as this is presented for test I do get a little ‘pumped’.

After DK had taken the bike for a quick blast and re-set the shock to balance the bike I was allowed to take to the track. I can’t really describe the feeling of being handed the bike and being told to go steady. Cruising off on this very personal bike was a pleasure. Everything felt perfect as I expected and the tight and precise feeling to every component was evident straight away.

The test loop incorporates plenty of single-track, some woods, motocross going and an endurocross section. My initial impression of the bike when hitting the track at speed was the firmness of the chassis. Precision handling is what is required at World level and bearing in mind how large Knighter is and this was what was expected.

This bike is the most precise machine I have ridden to date. You feel fully in control of every move and the light feeling when moving at speed is amazing. Basically, this bike is very capable of being ridden faster and more aggressively than I or any other normal human possibly could. My only feeling from the suspension was how easily the rear shock would move through from mid to full stroke when hitting a high speed face or drop. The great action on the shock and the fact it was newly set points to the fact it was only a few clicks away from optimum performance.

The motor was the biggest surprise as the amount of power available was in no way a challenge. The smooth delivery and ability to be ridden easy through the tight going was amazing for what is a full on MX motor. There is plenty of power but it does nothing surprising. The mapping changes to soften the low down power work perfectly to allow this motor to show its versatility. The hydraulic clutch worked flawlessly during the test with a perfect feel at the lever and through the motor for a controllable feeling.

As the day progressed and I spent more time with the bike I genuinely couldn’t find fault with the package. The light feeling was incredible and mixed with precision and instant smooth power makes Mr David Knight’s Honda CRF450 one of my all time favourite machines…