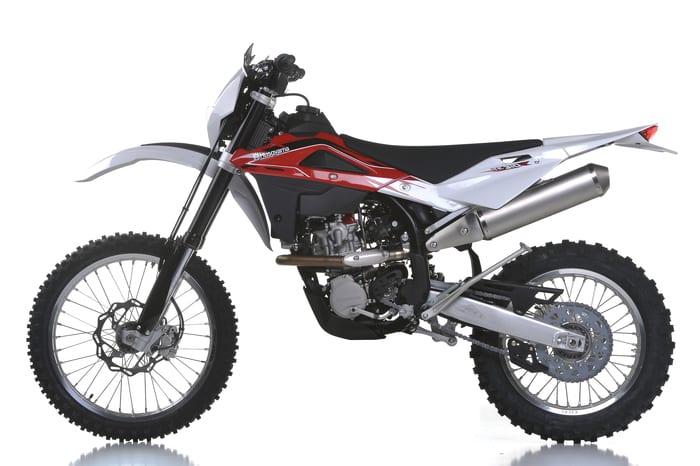 The little Husqvarna has taken a right beating since my last update. I’ve added another 22 hours on the clock and each moment has been pretty much pinned. The highlight of my riding has been a three day ride out on the Isle of Man. Robin Powell of the mighty Molson Group has a big day coming up so Jonners Wilson organised a trip to the awesome island with Alex Rockwell as our ride guide.

This proved to be the major road trip launch of the SR75/DBR van of power and myself and Martinez Tucker managed to squeeze seven dirt bikes into the medium wheelbase beauty! Loaded! We all had a brilliant time on the island and myself and Alex spent some time on a few short extreme sections to give the bike a good workout in between the miles of fast rocky going.

The Husky has taken a beating as every test bike should and it’s now been fully under water twice which is something I know Sutty likes to do with his trials bikes. The first time was at my test track and the second in the bogs of South Wales. Sorry Husky Dave but this is testing DBR style…

The bike has proved to be absolutely bullet proof and in the last couple of months I have had a grand total of two bolts come loose! One on the rear mudguard and one on the headlight mount. When you remember that the bike is being ridden as hard as I can make it go that’s impressive stuff. The more time I spend on the bike the easier it feels to ride and throw about.

The 2012 Husky TE310 is not the fastest bike out there but I am struggling to find fault with it from a run what you brung point of view. This 100 per cent stock bike has and will continue to take a kicking from us here at DBR until Husky Dave takes it and rips it from our grubby mitts. What a bike!