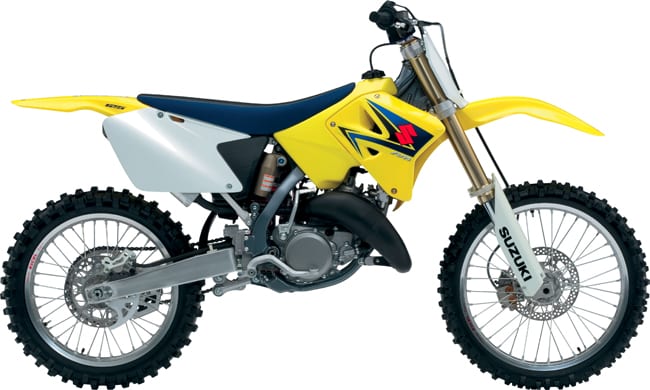 There I am warming up the little zinger staring out onto a perfectly groomed and rolled FatCats practice track that’s as flat as a snooker table thinking ‘flat sand track + 125 = a hell of lot of fun’. I’m just about to click into gear with a smile already ear to ear when Rob Hooper leans over and says “you’ll have to take it easy for a while, this one hasn’t been run in yet”. Arghhh! All I want to do is gun it right from the off, not just for the fun of it but because it was also so, so cold.

Anyway, after an open display of constraint and limbering up both myself and the bike I started to wind up the wick and it was well worth the wait. Whenever I ride a 125 it brings out a small, lingering regret – the fact I never really had a serious crack at racing them. When I came out of youth motocross I jumped straight on a 250 and the only season I raced one was towards the end of my career when I knew my better days were behind me and was racing more for fun and that’s what the 125 offered me.

There is no way this bike can compare to or compete with a 250 four-stroke – especially as one as good as the RM-Z – but I still believe in my heart of hearts it should almost be compulsory for young riders to race a 125 before leaping onto a 250cc four-banger. It sharpens the senses, no question. I still think the feeling of getting a 125 on the pipe is a hard one to beat.

So what of it? Well, as 125s go this is a belter and let’s be honest Suzuki have an incredible pedigree in this class as their 13 titles in the 125cc world championship testify (10 consecutive from 1975 to 1984 by the way). Just as with the RM-Zs I don’t think it’s the most powerful in its class but the whole package is sublime – right across the board Suzuki have one of the best chassis and suspension unions going and the two-stroke range is no exception.

With a 125 you really have to be able to put the bike where you want it and chuck it around like a one-night stand and with the Suzuki you can do that better than most. Like the 450 I’d stiffen up the front forks a bit if I wasn’t going to have full suspension tuning to suit my needs – something the serious racer should always consider (after all, there’s no point having a ripping motor if the wheel is skipping off the ground all the time).

The jetting was bang on for the day and crisp. Of course it wasn’t as sharp as the EFI four-strokes because they are still running with a carburettor but the set-up was good. As much as Suzuki have improved their gearboxes down the years their shifting still doesn’t quite feel as smooth compared to some of their competitors – I’ve always felt it was their Achilles heel along with clutch durability – but that’s just a small criticism of what is otherwise a fantastic bike.