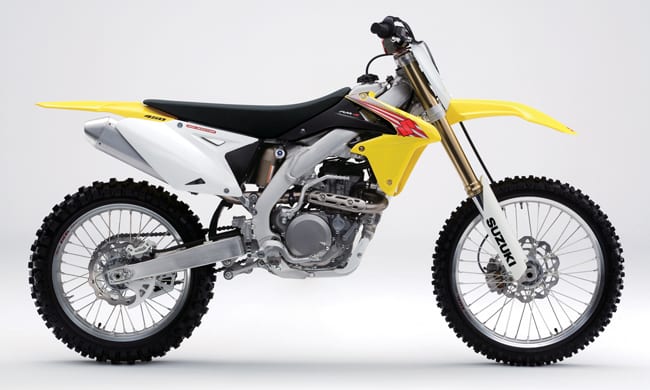 Like its little brother the RM-Z450 is a fantastic motorcycle and like many older brothers it’s rock-solid and dependable. I think the 450 is more about the sum of its parts – I wouldn’t say it tops the polls if you break down each department of what makes a great bike but it’s always close and consistent and that’s the feeling you get when you ride it.

Remember this bike was the first EFI 450 so you could argue that Suzuki have had a little longer to fine-tune fuel injection on this beast – after all, it’s the only bike with a tip-over sensor. Having said that they fell a little behind with the adjustment of the mapping. Well not any more as there are new mapping options – one richer and one leaner than stock that are easy to change with the connector unit and if you want to go more advanced you can with the Yoshimura tuning box.

To be fair there aren’t really a great deal of changes to this bike. There’s an increase in compression ratios which is a subtle difference if you concentrate hard enough to notice it and the intake and exhaust cams have new profiles. Last year’s 450 found a lot more grunt than its predecessor but this time around it’s been made that little bit more user-friendly really. Like the 250, it’s super-smooth, ultra-responsive and oh-so easy to use and it doesn’t scare you. And nobody needs a bike that scares them, especially in a sport where lack of confidence can cause you bodily harm. It has the same traits as the 250 but doesn’t quite have that little extra spark.

One area where I reckon both of these bikes would be hard to beat is cornering. You really can cut some tight lines on these bikes and get them into the corners with minimal fight and because of that alone they bring great value. They are both confidence-inspiring bikes – if not the most powerful – so what you may lack in raw power you’ll make up for and probably surpass with confidence and therefore speed. One small criticism I’d have of the 450 is the suspension units don’t seem to be so in sync with each other as on the 250.

The front forks, although having a smooth action, dived a little too much for me and were too soft – particularly under braking – but other than that the RM-Z450 is a bike that makes you feel good in stock trim and you really wouldn’t have to do too much to it to start riding well. Both Suzuki’s four-stroke racers are light, nimble, controllable and above anything else confidence inspiring. That’s why I believe they had more to do with RC and Dungey’s success than they are given credit for.