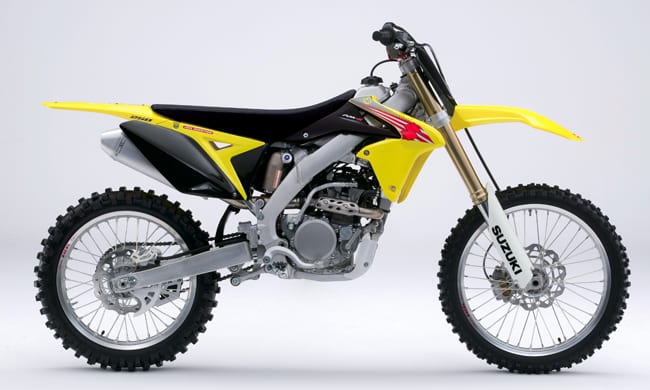 I can’t tell you exactly what I said to the Suzuki crew when I got off this bike because it’s a family magazine. But what I can tell you is that I was genuinely angry and upset because it really, really cemented home the fact that two-strokes have no real place racing alongside a bike like this. Not unless you truly like a challenge. This bike is so good.

I got straight off the 250cc two-stroke onto this bike and it almost made a mockery of the smoker. If I had stepped off the 125 it would be easier to accept the amplified quality of this bike but I hadn’t. I stepped off a ripping 250 two-stroker in deep sand and compared to it the RM-Z250 made turning laps around FatCats seem less effort than pounding out laps on a PS3.

It was effortless. It took a sport I love for its required effort and sheer brutality and made it so much easier. Of course I understand racing is about results so anything to help those is a plus but the romantic in me was crushed. It tracked over deep ruts like they weren’t there, even when they started to freeze. The response and power in the deep sand just pulled me through no matter where I was in the range.

From slow speed corners coming right off the bottom right through to top gear to the stop it just had it. It was like it was an automatic such was the effort it took to ride the thing. I don’t think it has that raw power like the KTM or Kawasaki but I do think the transition through the range is smoother and therefore it feels easier to ride.

Last year’s model was a great bike and with a few refinements Suzuki seem to have made a huge leap forward. The intake and exhaust cam timing have been revised along with the ECU settings and there’s a longer exhaust. The clutch has improved lubrication (not that you really need to use it) but the one change that I believe has improved this bike so significantly is third and fourth gears have been widened. With the razor sharp response and torque it felt like they were the only gears I really needed. Even in a few tighter corners where I may have dropped it down to second gear I just kept in third, threw it into the turn, rolled on the throttle without clutching it and went round like I was on rails.

I hardly had to shift my bodyweight either – that’s why it was like being in my comfy chair. I just seemed to sit there in the centre of the bike with it doing everything for me. The chassis is beautifully balanced and the ergonomics allow you to shift weight around easily. Nothing feels too wide or too slim – well to me anyway. Both front and rear Showa suspension units are smooth and I believe the spring rates are an ideal starting point for novice through to pro to tweak to your preference. It’s just a quality, sublime motorcycle – period.