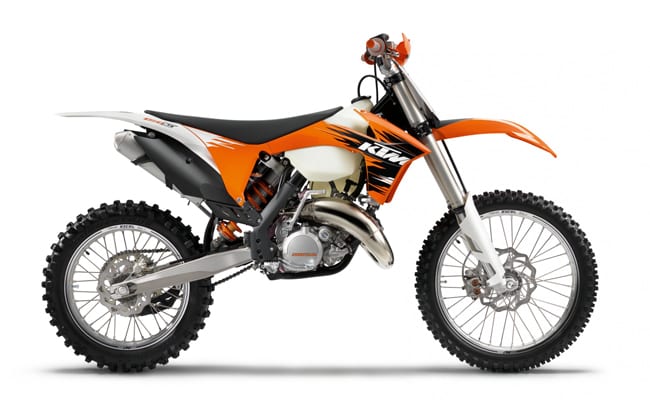 Once again KTM have pushed the range size of their off-road bikes to new levels with another machine to take on the challenge of the ever more popular cross country racing scene here in the UK.

The idea of a XC-style bike is to cross a full-on MX machine with a full-on enduro bike to get the best of both worlds. The KTM 150XC is aimed at the smaller and livelier rider with a view to offering a seriously light bike which makes enough power to tackle the differing terrains of modern cross country races.

This bike isn’t really made for a man my size but sometimes it’s good to test a bike’s capabilities when it is under extreme load and trust me, my size puts a bike like this under pressure… Add to that the equally large frame of Mr Lawless testing the bike in the wilds of Wales on an Ady Smith training day and this bike is earning its stripes.

I have to say I was expecting the 150 to be a bit of a hard work ride as the power would have to be just right to make it perform on both the MX track and my enduro loop at Marshfield. The first thing I noticed with the bike was the weight, or rather the lack of it. The bike does seem to weigh next to nothing and this will bring smiles to the faces of riders who choose to part with their hard-earned dosh for the joy of being able to simply lift their bike over an obstacle or off themselves and then crack on with their ride.

It’s easy to forget just how light and nimble a little two-stroke can be and this of course adds to the fun factor. I took this bike from brand new at KTM UK and slowly ran it in over a couple of days to make sure it was perfect before cutting it loose on both tracks at the Marsh.

The motor grew in power as it ran in and loosened up and the feeling from the engine was easy to read as the power would grow from the bottom with a smooth and linear feel, followed pretty smoothly into the powerband which would make the XC start to sing its merry tune. And what a delightful tune that is. The one fiddy barks out its orders to the back wheel and when it gets up a head of steam you really do get moving.

This bike is an absolute blast to ride around the MX track and it pulled well from the bottom of the hills. It took me a few sessions to get to grips with the thrashing the 150 required to get the best from it on the track but once the aggressive mojo was in place the bike was a different animal altogether and I started to enjoy every metre of dirt, every berm, rut and bump. To say this little bundle of screaming two-stroke power liked to be ridden hard is an understatement. This, however, is not the whole story with the 150XC.

To be a true cross country bike it must have low-down useable power when the throttle is first rolled on to help the rider find grip in difficult and slippery conditions over rocks, roots and slick going. The 150 has a good amount of roll-on power and it was in the tougher sections of the enduro loop where the bike came into its own.

With the light feel and the roll-on power the bike would easily pull from nothing to ease me out of the most slippery, low-speed sections of track. The XC specific gearbox allowed every situation to be coped with from the very slowest trials style parts of the track to the wide open, high-speed sections. This bike is so new into the UK that KTM don’t have the exact spec on the gear ratios but as usual the orange crew seem to have found the correct blend of ratios to work in harmony with the power running to the back wheel.

When it comes to the working parts of the chassis and controls the usual high standards are retained with this new model. The shock is set slightly harder than EXC models and the twin chamber forks are a step above the enduro models. The harder settings in both shock and forks make attacking every obstacle fun and even at full gas on the MX track I only bottomed out a couple of times.

If anything the units at front and rear would be a tad hard for the targeted rider of this model but the suspension reacts well to change so with a little softening and more running time the chassis would bed in and make life even easier. The stock 18 and 21 inch Bridgestone tyres perform well with the help of the useable engine and chassis package but if you are hitting the tracks of the UK you will want to change the rubber and go for a slightly softer terrain type tyre to keep you stuck to the often soaking ground.

Throttle action is featherlight and the front Brembo brake is great for feel but as with all KTMs the rear brake takes a little while to get used too as it is quite sharp. The overall look of the bike is pleasing to me and when riding I didn’t catch my boots or kit on any plastics or other parts.

To conclude my test of the KTM 150XC I would have to say another well done to the folks in orange for being on the ball and providing a bike for a specific and rapidly growing part of our sporting group. Nimble, light, easy to maintain and – above all else – great fun to ride on a track or in the woods.