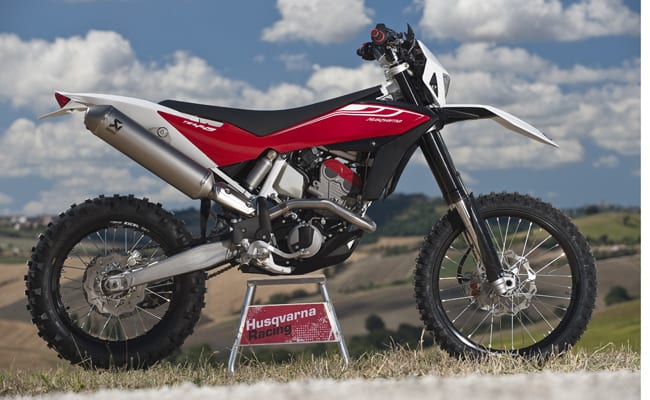 As my learn’d colleague Jeffrey has already mentioned, Husky’s new 449 models look quite strange at first glance and, to be honest, second, third and fourth glances as well!

The TE449 looks quite large but then again I’m also quite large so I liked the look of the vehicle from that point of view. The marketing spiel for the bike gave us some sorta Crouching Tiger, Hidden Dragon reasoning for the shape of the bike – stealthy looking with flowing lines they reckon. In my opinion the bike looks pretty big and bulky but it is tall so I felt good when I jumped on the weapon.

There’s a solid feel to the bike when you sit ‘on’ it – and this bike is definitely a sit ‘on’ rather than a sit ‘in’ machine. The Husky has the distinct ‘European’ feel to it which you used to get a few years ago before the Euro manufacturers moved towards a smaller, softer ‘Japanese’ feel to come into line with the world markets.

I was lucky enough to have the whole day on the 449 so I could get a feel for it as a package on the limited going available. I found the bike to be unique in more ways than just its looks. This bike takes time and commitment – if you think you’ll get on it and take on the world in the woods straight away you have another thing coming. This bike needs to be learned as it doesn’t ride like anything I’ve ridden before.

It takes time to learn the feeling you get through the chassis and this means you set up differently for turns and you have to be super-smooth and think two steps ahead at all times. This bike requires you to take a measured approach and if you are not well ahead of the game it will not help you out. If you’re not set up for a turn it will keep on truckin’ straight through and if you spot a rock a little late when blasting a technical climb you’re in for an uncomfortable moment.

But if you get it right and stay smooth with the 449 you start to get a feel for the linear and grunty power that comes from the motor. I liked the power and delivery from the 449, this thing makes its ponies and although it’s difficult to get them to the ground at times it gives a superb solid grunt all the way through the rev range.

The chassis is the part of the bike which is the most difficult to work out. It gives a slight feel of being just a touch out of balance which makes technical riding a little wild at times. It doesn’t give a planted feel and even though the engine is trying its best to produce the perfect power to help out, the imbalance in the chassis makes the bike as a package hard work in situations from medium speed to technical going. The 449 uses the pivot point of the swingarm through the final drive sprocket just like the BMW but I found this to work a little better on the Beemer in technical going as everything felt lighter with that model.