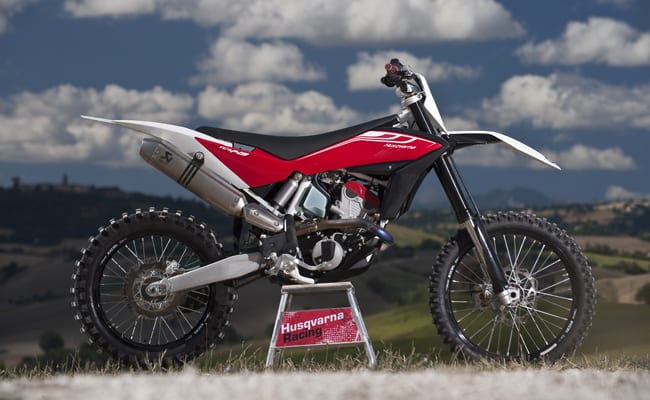 The big question I keep getting asked about this bike is ‘is it a big step in the right direction?’ – and the answer’s no. It is a step in the right direction but not a big one in my opinion. This new bike is an improvement on the 2010 model – no question about that – but there’s still a long way to go in producing a bike that can compete with the other big five on the world racing stage. I’m a definite supporter of it’s mostly down to the rider but at the same time you cannot win at that level on a bike that isn’t up to the job…

But let’s start at the beginning. Looks wise, I don’t think there’s going to be any middle ground with this one – you’ll either love the way it looks or hate it. I won’t lie, I’m asked to give my opinion so I will and cosmetically it’s not my cup of tea at all. Yet I’ve already spoken to people and seen enough feedback on the internet to suggest there’s a fair few of you out there that like the radical, modern design. For me it’s all a bit too ‘Street Hawk’ and a bit too futuristic but maybe I’m not as down with the kids as much as I thought?

It may be one of those things that grow on me but traditionally first impressions go a long way. Husqvarna informed us at the official launch presentation that the ‘bodywork shape tells our unique personality’ and shares the same characteristics as a leopard by being ‘threatening whilst static and aggressive and dynamic in attack’. I’m not sure how to read into that. I can understand the principles of the design with the more flowing lines and one piece rad shrouds that lead right through to the unusual rear mudguard, I’m just not sure if this Husky is ready to be compared to a leopard.

Out on the track the ergonomics and general overall feel was that of a tall bike with slightly restrictive movement towards the rear – mostly due to the wide and bizarre looking rear mudguard. I felt sat upon the bike as opposed to being part of it. For the best part I felt like I was sat in the right position but just too high up, even with the rear feeling low.

The seat is firm and stayed firm throughout the day which compared to the Kawasaki is a good thing. The seat and the slim front end ergonomics allow you to get right to the front to the point where you could easily snare a plum (or both) between the forks and frame as you turned and there’s a reason for that. The fuel cap is at the rear of the seat, yes, the rear!

The TC449 is all topsy-turvy when it comes to filling up. It has two fuel tanks – the main one tucked under the seat is 6.5 litres while the lower transparent one gives an extra 2 litres of capacity. They’re both in the centre of the bike to distribute the mass and give it a lower centre of gravity and help it stick but again it may be part of the problem for the front riding high and seeming more detached from the rest of the bike.

The bike weighs in at 108kg and it feels like a fair percentage of that weight is centred around the top of your calf muscles and just behind your knee. With the rear pushing into the ground and feeling slightly lower than virtually all of the other bikes, I found that I had to force it into the turns a little because the weight is behind you but I didn’t want to soften up the forks too much to counteract that. If I had I would’ve then struggled a little on the jumps and to ride at the speed I wanted, so the obvious choice for me would be a re-valving on the forks to suit my needs and level the bike out a little because the rear definitely hooks up. Of course that’s me and I’d like to think I’m a better than average rider so this is where the club rider might feel this bike sticks to the ground great. It’s definitely a bike that prefers to be steered with the rear.

As for the motor it’s mellow and easy to use but I’d like to see more raw grunt out of it – so it’s there if you need it. On hardpack tracks I think it can hold its own but on a track with a heavier soil I think it may load the motor and leave you wanting more. It’s all pretty tightly packed in the frame and comes with a two-way mapping switch as standard (apologies for sounding like a shifty car salesman there).

It’s all meant to be quite simple – there are hard and soft settings – but somehow even that confused me! I started it off on the hard setting and thought ‘if that’s the hard hitting power, then the soft must really be soft’ so I pulled over, killed the motor, pushed the button over to soft, waited 10 seconds (you can’t change the mapping while the motor is running) and then rode off expecting it be slower and smoother, more like an enduro bike.

The result was the complete opposite. It definitely had more of an aggressive mid-range hit, which I preferred. Not wanting to sound like a confused old man who had forgotten to take his pills, I sheepishly told my findings to the other test riders and they all said the same – weird. Either way, the mapping switch definitely works and changes the engine characteristics so as far as I’m concerned that’s a positive and my glass is half full.

The gearbox is smooth and tight with the neutral easy to find but not too easy to the point where you can hit a false one that sends you over the bars. The frame is wider at your heel and the gear shifter is tucked in on the narrower engine – it’s like you have to ride the bike with your toes pointed inwards.

The brakes are Brembo floating caliper, 260mm wave disc on the front and 240mm on the rear and they do have a great, strong feel albeit the front brake squealed like a hungry piglet all day. To be fair it was a little dusty and hot which often brings that on.

The TC449 comes with a full Akrapovic exhaust system that has been extensively tested with the continued development of the motor. Any bike that comes with a quality exhaust system is always a bonus as far as I’m concerned. The grips are quality too, the handlebars have a nice straight bend that doesn’t put any extra strain on your wrists and the graphics are moulded into the plastics so there’s definitely some nice touches – but it lacks that big cat killer instinct that Husqvarna have claimed inspired the design.

I’m sure it won’t long before this new breed of Husqvarna is really showing its teeth and making a roar but for now it appears they are quietly going about their business scoping out their pray and aren’t quite in a position to strike.