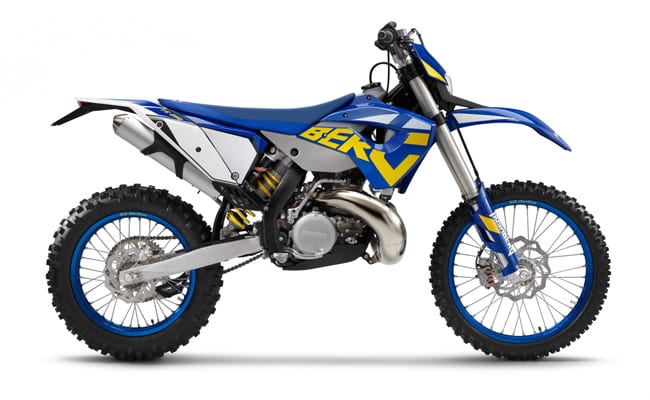 “When the sh*t goes down you better be ready…” That’s a saying that rings true in my little world and it’s a saying I like to live by when it comes to being in the right places in the world when there is heavenly dirt bike sh*t going down!

Which brings me to the sunny North East of Spain for the 2011 Husaberg range launch. These Austro-Swedish beauties are kicking things up another gear in innovation and Team DBR just had to be in at the thick end of the action to see what was going on.

The word on the street was that thumper-loving Husaberg were working on some seriously revolutionary two-stroke models for the 2011 range. Now if you know Husaberg and their philosophy towards the world of the four-stroke you’ll understand that this world has always been their only focus.

Innovation to go racing with good rideable characteristics has been the focus since the company’s relaunch in 2008 with the 450 and 570 models. Add to that the superb 390 and the 450FX Cross Country models and the range of Bergs was more or less complete. The only missing key seemed to be a 250 four-stroke as it appeared unthinkable that the blue and yellow would go with anything without inlet and exhaust valves connected to an innovative engine design.

As I’ve just said, this is pretty massive for Husaberg as the brand has always been 100 per cent four-stroke. The rideability is key to Husaberg and they have decided to go for a huge step into the two-stroke market – a big statement in this era of four-stroke power. For a manufacturer with the previously core value of valves, springs and oil filters this is a cool step to cater for every rider out there looking for fun on the tracks and trails.

The excitement at the thought of the Husaberg mindset hitting two-stroke development was right there in the room. Would the direct injection make the bike more useable in all conditions? Would the motor be a 70 degree, mid crank unit? Would it be this? Would it that? I think you get where I’m coming from…

Well to cut a long story short the excitement built and then levelled out. The two-stroke Husaberg looked fantastic sitting there in all its shiny glory but there were a couple of things missing. Where was the odd-shaped engine? Where was the fuel injection system? Well the answer to these questions is simple – they weren’t there.

Now the rumours were circulating for a long time before the launch so these things have a tendency to get a little out of control and although I could have been disappointed to not see any major innovations from possibly the most innovative R&D department in off-road I actually wasn’t disappointed at all.

I kind of expected that the KTM link with Husaberg would be called upon for the first model two-strokes and that hunch was proved correct. This is in no way negative as if you are going to make a two-stroke enduro bike and give it some Husaberg hop-ups and style then why not use the KTM as the base! After all, the orange bikes take some beating when it comes to the 250 and 300cc models.

The chassis and motor are shared and the major differences are the CNC 22mm off-set triple clamps which hold the uprated, closed cartridge 48mm WP forks. The fuel tank is a see-through 11-litre big daddy unit which will allow you to travel further than your orange riding buddies who, from memory, sport around eight litres of propellant juice. Both bikes come with the dual ignition switch fitted as standard and this coupled with the twin valve control or TVC changeable power valve springs allow for an unrivalled six power characteristic changes to be made with ease.

The TE250 feels like an old friend from the off, simply because the feel is comfortable straight away. The handlebars coupled with the lever set up ooze good ergonomics and this makes for a happy pilot. There is a simple scenario with this chassis package – it works. Now the feel provided with the 22mm off-set and closed cartridge forks takes this chassis to a new level and a step beyond its orange cousin in the technical department. Yes, the bike can get a little out of shape sometimes but that is the fun of a two-stroke with a light and nimble chassis. This bike is all about the smile factor and whatever level you are grippin’ it n’ rippin’ it this bike has the tools.

The motor is user-friendly with a touch of the wild child as it comes in stock form. The power is super-smooth low down followed by a slightly uneven transfer into the mid-range hit. This is obviously where the tuneability of the motor through the TVC and ignition switch comes into play. How much fun is that going to be? Tune the bad boy right up to your personal set-up with ease then ride with pride.

The feel and feedback from the bike over the massive test area here in Spain was good as the terrain was loose rock followed by more loose rock with some loose rock, extreme mountain sections, special test and man-made sections. There was a bit of everything to test the bike to its limit. Stability was the key to turning speed and the 250 delivered this in its own way with just a touch of the hooligan to let you know you were on a two-smokin’ two-fiddy!

The TE300 was the bike I was looking forward to strapping my Norn Oirish ass to the most as I have used 300cc powered bikes in some of my extreme adventures in different parts of the world. Could this bike possibly out-gun its orange cousin? Surely not? Well, if first impressions are anything to go by then it may just do that very thing. I cannot put my finger exactly on the key points but this bike takes two-stroke stability and rideability to a new level.

The special test provided a perfect work-out for the bike with many parts that should favour the four-stroke but the 300 ate ’em all up with ease. The level of grip that could be found inspired confidence and the way the motor worked with the chassis in such a balanced fashion made the tyres bite into the rock and dirt to allow aggression and some of the naughtiest off-camber pure rock and dust turns I have ridden.

The solid nature of everything about the bike was running all the way through and ultimately made life easier when ‘the need for speed’ arose from my man area! Maybe the bigger tank with slightly more fuel settled the chassis further and this together with the clamp set-up and uprated forks made it a dream ride!

The closeness of the Husabergs and KTMs is pretty evident but from a key engineering and development point of view as well a financial angle the Husaberg really is going to be hard to beat.

I want to find negatives with it from a technical point of view but I’m struggling. The chromoly frame works in harmony with the bike as a whole to allow for flex, the build quality on componentry is right up there with the big boys and the closed cartridge forks coupled with the 22mm off-set CNC billet clamps are an upgrade made in dirt scoot heaven. Then there’s the huge fuel tank!

I reckon we’re talking a couple of grand minimum in tweaks and upgrades to the ‘blue’ and at not too much money over an ‘orange’ so you can maybe see why I cannot give these handsome vehicles a hard time..

So what do we have? We have a pair of smokin’ two-strokes dressed in blue and looking good. Okay, they’re not perfect – there are some wild moments due to the PDS shock causing small sideways moments – but is there such a thing as the ‘perfect’ dirt bike? I think not.

So have Husaberg gone for the easy option and made a blue KTM? Well you could look at it that way but I’m choosing not to. As far as I can see this is the perfect step into the two-stroke market. Let’s face it, the blue side of the family would be crazy to enter into the stroker battle with a radical design when they can use certainly one of the best overall packages about to redress and add enough Husaberg modifications to call it their own and reach a new level.