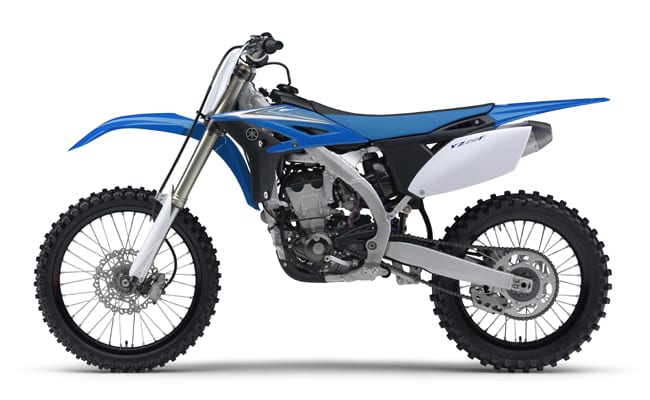 The day of the test I was supposed to be setting off on an 850-mile cycle from Lands End to John O’Groats but the chance to rip around my own track on a 2010 YZ250F was too good to turn down. So the start of my marathon trip was delayed by 24 hours and instead of Cornwall I found myself at Finningley. For a change!

Arriving at the track there were two 2009 250Fs and the new 2010 model. The guys at Yamaha explained that we could ride both bikes to make a comparison and then went on to tell us all the wonderful new things about the new bike – but more about those later, first I wanted to have a rip around the really well-prepped track, get the feel of this year’s bike, learn how to get the most from it and then have a look at the 2010 machine.

At first sight you notice the difference in styling between the ’09 and 2010 bikes – I prefer the new straight lines which give next year’s model far more of a ‘racer’ look compared to its predecessor. All the plastics are different, including the tank and air box. This alone gave me the feeling of wanting to jump on it and tear off down the start straight!

Up close the new rad scoops have the Yamaha emblem embedded in the black plastic which is designed to improve grip and help remove clinging dirt on the bike. Almost as importantly it looks trick and there’s no way you’re going to hook your boots on the end of those scoops when you have your leg out for a corner!

Looking closer you’ll notice that the bilateral beam frame is a big change and that there seems to be far more room around the motor for working on it. The air box intake is also different – it’s straight through and I imagine that this will make it easier when fitting the subframe. Instead of fumbling around trying to fit the boot onto the carb it looks like it should be much easier to push the boot straight on and there is also now an oil level window gauge which I think is a nice touch andhas been a long time coming.

Yamaha say that the clutch spring load has changed although I didn’t notice because the clutch action still felt light and positive due to a change of ratio on the push lever.

Sitting on the bike it’s immediately noticeable that the seat/tank junction is a lot wider and a little flatter compared to the ’09 model. This felt good and much more familiar to other bikes that I have ridden. The handlebar and footpegs seem to be in a similar position to the ’09 model and there is now the option to move the bar clamps into four different positionsmaking the bike a more comfortable fit for a much larger range of rider sizes.

The bike was easy to start both from cold and when hot (using the hot start when the bike had just been ridden it fired up first kick). As I rode the new YZF onto the track it felt similar to the ’09 machine – for me a little small and as if I was going to bang my knees on the bars when going into turns or when man-handling it aroundthe technical parts of the track. But I quickly found out that the bike turns really easily and that there’s more than enough room for a tall guy like me to move from standing to sitting at the front of the bike. This for me was a big plus for helping me to ride the bike very quickly and easily.

It was also fun practising starts. Compared to my 450F I reckoned the new Yamaha would be child’s play so without holding on too tightly I dumped the clutch and ended up on the back wheel all the way down the start straight, feverishly clutching it to stop me from looping out! The next start I took more seriously and sat right at the front (which is really easy with the new seat and low tank), held on tight and let it rip. Wow! It’s hard to believe it’s just a 250F!

The suspension was a little soft for my liking but I’m sure that altering the clickers would have kept me off the bottom part of the stroke on landings and hard hits. What did feel good though was that the travel was both plush and smooth all the way through the stroke giving what I would describe as gentle and accurate feedback from the surface of the track.

The bike also kept good traction on the rear wheel when accelerating out of turns which meant that I could really use the engine’s torque to its full effect. The front end held the ground really well when braking and feeding the bike accurately into the many different lines for the corners -whether they were off-camber, bermed or just plain flat.

To get the most out of the suspension I gave the brakes a good work out and the only difference I noticed between the ’09 and 2010 models was that the back brake was easier to feel, rather than being an on/off switch. The front felt much the same,strong with good feel on the lever.

What did light me up about this bike (as well as the easy turning) was the motor. The bottom-end is great and has plenty of torque to pull you out of tight and slow corners – the bike just picks up awesome and is very strong. I had a lot of fun using the mid-range on two corners in particular. These turns were long, flat sweepers where if I had given the bike a big handful I would have being doing high-speed doughnuts but instead I was using a constant mid-range rev which was both strong, smooth and fast. The best bit was opening the throttle – the response from the motor was both quick and strong with the motor chomping at the bit to get into the top-end.

Once into the top-end it was very similar to the ’09 and felt all right. You don’t have to wait long to get to the peak revs and it didn’t finish quickly either. Like I said, it was all right and I’m sure that – if you’re a revver – then some kind of aftermarket hop up would give you even more there if you wanted it.

Overall the YZ250F is a big improvement on last year’s bike. The top-end power is okay but the bottom and mid-range power is great and it handles and turns like a dream. There’s plenty of room to balance and move around on the bike and these aspects make the new Yamaha 250f a very competitive machine.