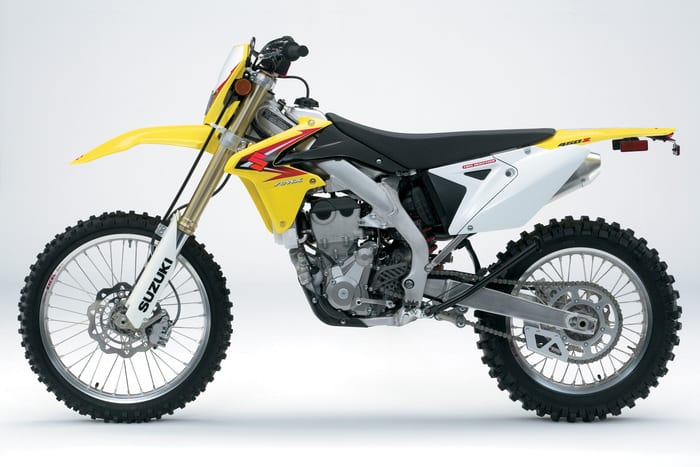 Can it really be done? A Japanese enduro bike ‘based’ on a motocross model that comes as a package that’s pretty much ready to go racing without major part removal for lightening and raceability? Can Suzuki take the RM-Z450 MX bike and tweek it enough for hardcore off-road racing and riding without ruining the essence of a great chassis and motor package? Can they really make the RMX450Z the real deal?

If first impressions are anything to go by then the answer to these questions seems to be a resounding yes! The bike brought in to appeal to the masses and, at last, offer an alternative to the legendary DR-Z400 trail bike gave me a little buzz in the trouser department when I first laid eyes upon it at the NEC Show. And Walker’s weapon started to twitch again upon arrival at the off-road oasis that is Wheeldon Farm off-road facility in Devon. What a beauty…

Now Suzuki have gone for it with this bike and although it’s not going to win prizes for being a lot lighter than the other Jap bikes out there it is in the right area with a kerb weight of 123.5kg being pretty much the same as the WR450 and around six pounds lighter than the KLX450. The makers of the yellow perils set out to make the RMX into a bike which is easy to ride fast AND slow as this is important to every off-roader. Plus they have kept the bike super slim which is always a bonus in the woods.

When you first sit on the bike it really does feel exactly the same as the MX bike – slim and ready to be chucked around. Bar bend is perfect for the bike and as you would expect on any modern bike the controls feel ergonomically pleasing. The clutch pull is a little heavy at first but the front Nissin brake is simply superb with the usual positive feel and the throttle has a light positive feeling. The cockpit is neat and simple with a digital display and the slick front headlight smoothly blending into the bike’s scheme of smooth lines and uncluttered looks. Seating position is comfortable with pegs to seat to bar all complimenting each other so well that the bike seems to blend and fit to you when sitting still.

The only initial standout negatives with the bike on first impression are the dated speedo cable winding up from the front wheel – no need – and the sidestand which kind of hangs around in the middle of nowhere and will catch feet and boot parts out on the track.

On the technical side the engineers at Suzuki have given the motor a gearbox to cope with all situations with a low-speed first and second moving to a solid third gear and onto the wide ratio – compared to the MX bike – fourth and fifth gears. On the top end the cams use a different profile to give the bike linear power delivery to help keep things smooth as the ponies pump out and this is also aided by the lower compression piston. Keihin take care of the fuel injection and Suzuki seem to have cracked it in the production department with their development of the easily tuned system over the past couple of years.

Last but by no means least of the main RMX motor developments is, of course, the electric start. This is not a bolt-on part to the MX motor, this is a specifically designed and incorporated system on the RMX engine.

The chassis runs the angles of the MX bike and the Showa suspension units are re-worked to deliver a softer action to suit the target terrain of the new bike. This chassis works well on the MX bike with an agile package so it is simply begging to be ridden hard in the woods (does that sound wrong?)…

So to the track! The first wheels to turn were on the indoor track at Wheeldon and the laps pounded out on the superb and technical circuit served well as an appetiser for the day’s riding as it offered a warm-up for bike and rider. The bike instantly started to show its easy-to-ride characteristics and the power delivery was bringing a smile to my face.

I did find the rear of the bike a little soft and out of balance from the fantastic feeling forks. I had the same feeling on the RM-Z launch a couple of months ago so I was expecting the same low rider feeling with the RMX. This would be easily fixed but it is a balance issue rather than a weight of rider issue. A slightly harder set-up in the rear would bring the balance back into sync.

After the indoor session it was onto the cross country track. What a track to test a bike on! A perfect blend of terrain and undulation to test every aspect of the RMX – tight technical woods, fast woods, technical descents, open going, rocks, roots, mud, streams, ruts, mud, mud, mud. What a place!

The bike takes all these challenges and deals with them with a smoothness not seen since Sutty’s dating days of his youth! The RMX takes every situation in its stride and really excels when the going gets mid to high speed in loamy conditions in the woods. This thing loves to be gripped n’ ripped through fast grippy wood sections and really turns into the bike it is designed to be.

The flip side is that this is a 450 and with that comes a bit of a weighty feeling when the going gets slow and slippery. That is a trait of all bikes in this class so it is not a negative of the Suzuki, it is a fact of weight versus grip and manoeuvrability.

When I say this bike is easy to ride, please do not take my words lightly – I really do mean it is easy. Even in completely stock form this bike makes life a blast and has every situation more than covered which allows maximum attack. This bike will make you faster in sections of track with its ease of ride and superbly sharp feeling chassis.

This is the next level in design and the guys and gals in yellow have built a bike which is going to eat up the off-road and cross country racing scene in the UK.