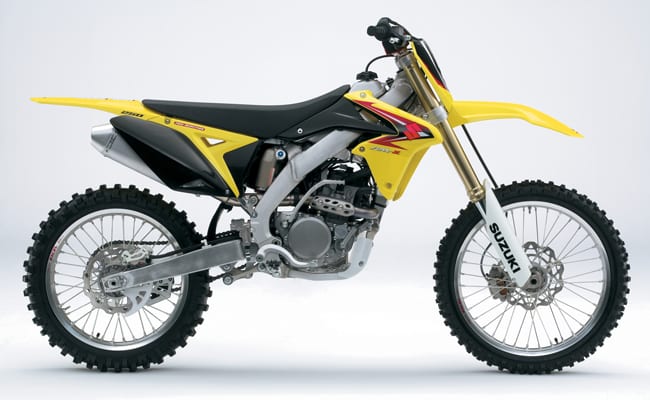 The 2010 Suzuki RMZ250 has changed – probably more than you think. Could it be the strongest bike in the MX2 class? Well, it’s certainly in with a shout…

I’ve got to be honest here, when I got the call to go to Desertmartin to test this bike I did wonder why. It seemed a little odd to go to Northern Ireland for a day when we could’ve tested on the mainland. My curiosity got the better of me by the time I got to the airport so I had to ask Luke Plummer of Suzuki why.

“It’s mostly all new with plenty of changes so we wanted to do something a little different for the launch,” reckoned Luke which kinda surprised me – after all, I’d given it the once-over at the Dirt Bike Show and it didn’t look too different so as far as I was concerned any changes would only be subtle.

Obviously, that’s not the case and on closer inspection there’s been major refinements to this bike, refinements that I have to say are all very much for the better. The obvious change is the new fuel injection but then there’s a host of other tweaks like changes to the compression ratios, gearbox, frame and swingarm. Clearly Suzuki are working hard to try and dominate the smaller bike class like they used to back in the day.

It would be fair to say that Suzuki practically built their reputation from their success in the 125s after going on a 10-year world title win streak from Gaston Rahier in 1975 to Michele Rinaldi in 1984. But that was then and this is now. Suzuki’s last world title in the smaller bike class was with Pedro Tragter in 1993 – however they’ve had a lot more success in America of late with Ryan Dungey and it looks like they are on the road to their former glories with a good programme and more importantly a good bike.

Contrary to the myth, looks aren’t everything but they do help and there’s something about the new Suzukis that make them more appealing for 2010. Personally, I think it’s replacing the blue as the second colour for black – it just seems to look more dynamic to me. Of course, that’s an easy change to make and having a mean looking bike is one thing but that will only get you so far. So the Suzuki bods got to work and have made a bike that not only looks good but makes you feel good when you ride it – well it did for me anyway.

The wheelbase is 10mm longer and there’s a new beefier swingarm which along with the new frame dimensions make the bike more stable particularly at high speeds and over the bigger bumps. The swingarm pivot point is now 6.7mm further forward with double bearings on each side of the shaft. The suspension is very well balanced and from the moment I rode out onto the track I felt part of the bike – the ergonomics felt that good. I always felt like I was in the right position on the bike without ever having to really think about it whereas sometimes on other bikes you feel you have to position yourself to get the bike to work. The track was quite slimy but this bike gave me the confidence to cut loose a little and let it squirm about.

The forks have different internals and settings and they are better for it for sure. They are a little harder with the spring rate up from 4.4 to 4.7 plus 5ml more oil and the springs themselves are 1mm longer. It all doesn’t sound much but those little measurements make a whole world of difference, something I’m still trying to preach to most women I meet!

With the improved fork Suzuki have be able to limit the number of adjustment clicks. The rebound is now down from 14 to 10 and the compression drops from 11 to 9 (I feel like Dale Winton doing Pick of the Pops here) but, like I said, they are improved and still offer plenty of scope.

The rear shock has also gone under the knife in a similar vein. The spring rate is also harder but the spring set rate’s 1.5mm shorter, there’s 12mm less oil but considerably more rebound adjustment. It works well with the swingarm and frame for sure and really tracks well through rutted corners – and there were plenty of them at Desertmartin. I personally would have it a little softer at the top of the stroke to take the edge off the sharp-edged braking bumps but with more time I think the adjustment is there to get that pretty well dialled. Other than that it really does feel nice and gives you confidence from the outset and even the higher line gripper seat helped, especially in the snotty conditions.

Thankfully the motor doesn’t let all that good work down. It’s strong with real smooth torque, so much so you can actually hear the difference. Maybe it’s the new silencer with larger internal dimensions giving it a different pitch but it does seem to sound really throaty, certainly more than ever before. This bike is particularly strong on the transfer from bottom to mid and that’s great because in the MX2 class in particular corner speed is essential. To be fair the motor has had the lion’s share of the mods and it’s where this bike has improved the most.

There’s more compression for starters as that goes up from 13.4:1 to 13.5:1. The new transmission ratios bear that in mind and now the primary ratio is 63/19 as opposed to 2009’s 61/19 and the sprockets have gone up one on both the front and rear to 49/13. There’s a new piston and thicker cylinderhead gasket and camshaft housing that now has the oil passage added to it. The hollow forged steel camshafts have new internal and external dimensions. The crankcase is a semi-dry sump system with reed valve and separate oil chambers for the transmission and crankshaft. Two trochoid oil pumps are connected by a shaft through the crankcases to give improved delivery and efficiency. The clutch has a great feeling and is now lighter with a longer spring, going from 45.2 to 50.7mm.

Put all that with the new super-sharp response of the fuel injection and you have a bike that delivers strong useable power when you need it. Suzuki were of course on the ball with the EFI on their 450 so they’ve had time to play around with it under race conditions and put that input into the RMZ250. With six main sensors placed in and around the engine capturing data this bike is more sensitive than a drunk chick watching a rom-com but luckily much easier to understand. You certainly know where you are with it and how it’s going to react. It doesn’t miss a beat on delivery, not once.

Of course you can map the ECM to your needs with a mode select coupler. The white coupler is to make it leaner for rain or high humidity and the grey richer for lower humidity or high-speed running conditions. With the aid of the Yoshimura tuner you can really fine tune the bike’s performance with multiple positions for the RPM, throttle position, fuel volume and ignition timing. For the full effect of becoming a bod just get a big white overcoat and some big square glasses and call yourself ‘Brains’. Just in case you’re not though there’s an indicator light to make sure you’re doing it right.

Unfortunately, there’s not an indicator light to make sure you’re doing right out on the track but to be fair Suzuki have produced a bike to better your chances. It’s a solid and a definite improvement on the 2009 model and one that may well see them become a dominant force in the small bike class once again – not just at the high-end pro ranks but also at club meetings all around the world…