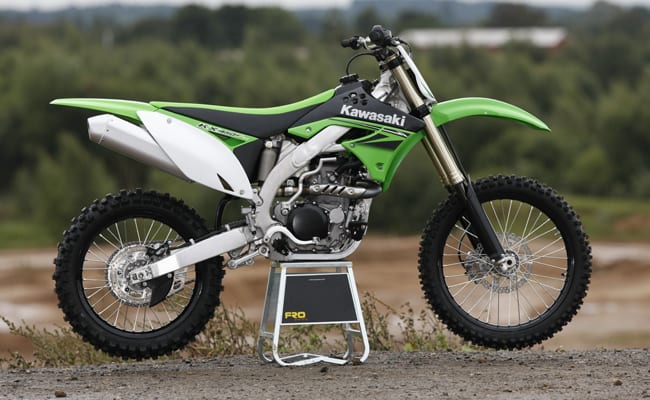 If there was any small and lingering disappointment at Kawasaki HQ at losing James Stewart to Yamaha it must have soon been forgotten after they produced arguably the bike of ’09 in the 450 class. It was a real makeover and a fresh start.

Kawasaki have had an amazing programme going in the States for a while – particularly with the success they’ve had with the Pro Circuit team – but here in Europe it hasn’t come so freely. Kawasaki’s last world title was in 2006 when Christophe Pourcel won the MX2 crown but there was only limited success before him, again from fellow Frenchmen Mickael Maschio and Sebastien Tortelli – but Seb’s wins came in the previous millennium.

Now I’m putting this down to bad luck because, believe me, Kawasaki don’t produce a bike that isn’t capable and I was privileged to be involved in part of the development process a few years ago. I say privileged – I literally took three layers of skin off my ass cheeks and was partially disabled for close to three weeks after endless testing, day after day after day. I never want to do that again – unless it’s bedroom-related. Just trust me when I say Kawasaki really do put a lot into their R&D and never was that more evident than the tail end of last year when they introduced the 2009 EFI KX450.

So where have they gone from there? Well onwards and upwards but not with such a big step, opting instead to make small refined changes to both the engine and the chassis to try and keep the positive momentum going and they’ve succeeded. It still has the same characteristics – like good turning ability and useable torque – but now it’s that little bit sharper. Like a boxer who’s just put that extra bit of training in for his next fight even though he won his last one convincingly – basically Kawasaki haven’t got complacent with this one.

Let’s start with the motor – it makes sense as it was the first thing that I noticed after looking across to Ray Archer who was snapping away with his camera and realising I was travelling much faster than I thought. It still has a lovely, noticeable torque from the bottom but now it just has more of it – or so it feels. So it’s quicker but not in a way that terrifies you, in fact as I said it’s quite deceiving really. Again, it’s probably the little changes all coming together that help this happen.

There’s a new bridged-box bottomed piston that uses the same design from this year’s factory models. The intake valve timing is two degrees forward (which has also reduced a little amount of vibration), the crankshaft has a higher inertial mass giving better traction and the new one-piece stainless steel exhaust pipe is 40mm shorter to offer up more mid to high rev performance. It all works and works well.

In the deep, wet sand of Finningley it cuts through better when you ride taller gears and use the torque and not the high revs and there was less bog as you pulled through the gears. If you compare that with the 2009 model it’s where the differences are most noticeable. Obviously out of the crate the Electronic Fuel Injection (EFI) settings are for the best all-round performance but you can tell that if you fancied making this more of a hard-hitting rocket it has the brute power to do so – for an aspiring pro that’s a good sign.

The ECU which controls the fuel injection has been revised from last year giving it better response from the bottom through to the mid-range so together with the changes that give the KX450 a little more high-rev performance it’s quite a power package. And as we race into the future of EFI it really is getting harder to see how they are going to make these bikes more responsive, I’m sure they will but I’m struggling to see how.

The reaction time is almost in sync with the human body, think as the throttle as your brain and the rear wheel as your hand. When your brain tells your hand to move the throttle works in the same way with the rear wheel – in a fraction of a second. There’s also new thicker and wider radiators with more space between the fins to keep the engine temps down a fraction and maintain performance and durability, another plus if not necessarily instantly noticeable. So from an engine point of view it appears to have all bases covered.

The bike is just a little bit more nimble to throw around too. There’s a new steering stem that Kawasaki say gives a ‘lighter’ feel. You have to believe them after riding the bike. I does feel a little wider when you sit on it compared to some of its rivals – that’s probably due to the new radiators – but to be fair you soon tend to forget about that when you start riding.

Since I first raced a Kawasaki in 1997 I’ve always found them to be a well-balanced bike when it comes to the suspension and I’m happy to say my opinion hasn’t changed there either. The rear shock is plusher than ever proving that the ‘Kashima’ coating works. Kawasaki claim it reduces friction and heat build-up so the performance is not only better but also more consistent throughout a moto – again, I’m not going to argue that fact with them. I actually think for the average guy they have it close to bang on with the suspension and you can never be totally bang on because we all ride different and weigh different.

None of this ‘the forks are too soft or too hard’ or ‘the valving is harsh in the shock’ for the average guy. Where both units are set and with the adjustment you have available to you I don’t think there’s any real panic to get them revalved or run different springs on either the front or the rear. The new spring rate on the rear is an improvement and definitely is in sync with the front forks that also have new spring rates and different settings.

It has a new, different cross-section on the swingarm and also new linkage ratios. It’s well balanced, it sits at an ideal ride height and with a nice moveable riding position there’s nothing that really sets the alarm bells ringing in your noggin. All groovy and all hip at this disco, so get up and dance.

The brake pads are new and now give a firmer stopping power but thankfully without snatching and wanting to ping you over the bars or make you stall in every corner. Let’s be honest, none of us want to be kicking over a hot engine during a race, looking like a festering dog with fleas while the people you really want to beat ride by. Luckily, the Kawasaki starts relatively easily but there’s never any real guarantees until everyone goes the KTM route with an electric start. The clutch is also better this year, it’s lighter still and combines well with good, smooth shifting through the gearbox. Material has been trimmed from the spring holders and the outer side of the clutch plate which improves the oil drainage and optimises rigidity, it gels well with the crankshaft and the bottom section of the motor.

This new, sharper, more aggressive fighter may not look any leaner on the outside but on the inside it’s stronger than it’s ever been. It has better durability to go with its new edge and with all of its competition putting in the extra work too it might just need it to win the fight in the heavyweight division. I guess we’ll all know when we get a few rounds in but it’s definitely a safe bet though, without question.