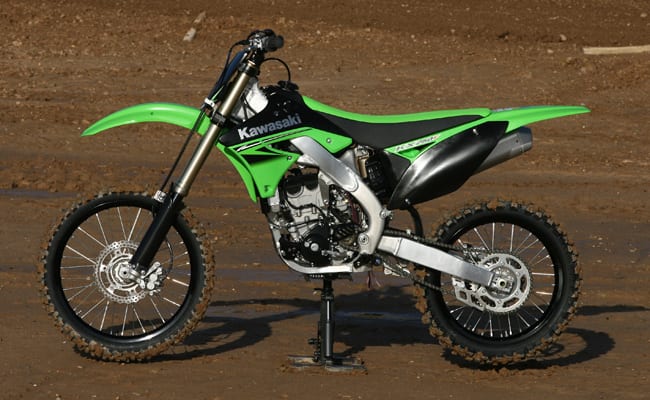 To get a really good feel for testing the 2010 KX250F I decided to take a risk and left the track rough after a busy Wednesday practice at DMP so that the bike could be tested under proper race conditions – big braking bumps, high berms, deep ruts and rutty jump faces – to really get to grips with what the bike had to offer.

Clive who brought the bikes up from Kawasaki said he didn’t really know what’s changed on this new model. He’s a mechanic who usually works on road burners so I guess he can be excused but one thing he did know is that the bike uses a new high-performance piston featuring a bridged-box bottom to increase engine performance and durability. This may prevent you being pistonbroke as you clock up the hours of riding your new KXF! Boom, boom!

Looking back over this year’s racing results, Gautier Paulin has put himself on the top of the box at a number of MX2 races and Christophe Pourcel won the AMA SX lites championship and came close to the Nats title on the KX250F. So with a machine race-proven at the highest level in the world – and assuming these top riders have been providing some sort of developmental feedback – what’s involved with making this green machine even better than the ’09 bike?

Starting with the engine, the new piston is the first mass-produced bridged-box bottom with internal bracing piston which is lighter and has a different profile to improve combustion. Kawasaki have increased the height of the cylinder to keep the same compression ratio of 13.2:1. The big-end bearing is 1mm thicker and features a copper plate on its cage and a longer crank pin to improve reliability. The oil pump rotors have also been modified – there’s a larger feed pump rotor to increase oil flow and a smaller scavenger pump rotor, again increasing reliability of the engine.

These modifications suggest this new machine will rev quicker with the lighter piston so to help keep the little ripper’s temperature down the radiators are 10mm thicker and 4mm wider and the cylinderhead water jackets have been tweaked and tickled.

The exhaust has slightly changed to have a longer head and shorter mid-section for better performance at low rpm while the frame has been tweaked in a number of ways to improve the all-important rider feel, position and control.

Firstly, the frame is 6mm slimmer which narrows near the bend below the seat for a better riding position, then widens at the ankles for better grip when throwing the bike around the race track. There’s also a new design around the fuel tank and both the frame and subframe are considerably lighter than the 2009 model. Finally, the swingarm pivot has been moved higher in the frame for improved rear wheel traction.

The suspension units are the same with a slightly different valving to increase stability on corner entry by reducing rear end kick. The biggest change, however, is in the linkage which has different ratios and longer leverage arms that allow for a longer rear suspension stoke and better turning compared to its predecessor.

To improve handling at the front Kawasaki have utilised a new steering stem so that it has lower rigidity which gives a smooth action and better handling.

This bike has been treated to fine-tuning throughout and when you look and sit on the bike the new refinements for the exterior are almost invisible such as a thicker front fender plastic, an extra hole in the side panel to allow additional cooling for the silencer and a new rim design for increased strength and lighter weight. Most noticeable are the footrests which are now 50mm wide.

So how do these alterations and modifications translate to performance out on the track? There’s only one way to find out…

To be honest I forgot I was testing the bike when I first went onto the track – I hadn’t ridden for a couple of weeks, the track was just how I like it and I got carried away with the moment. So what does that tell you? Well, consider for a moment that I’d just jumped on a brand new bike which I hadn’t ridden before and was knocking out some quick laps without giving it any thought – that’s pretty much proof that right from the off the bike has a great feeling to it.

There’s a very comfortable riding position with the relationship between the handlebars, seat height and footrests well spaced and just about spot on. The handlebar clamps are adjustable for fine tuning and the controls are easy to use except I found hooking my size 11 boot under the gear lever a bit tricky. The gearbox was smooth and went into gears fine, it’s just that the lever felt a little too close to the footrest for my foot!

Sitting on the bike in turns and moving around on the bike was easy to do just as with the previous models and even standing up around rutted turns and banked berms was comfortable. One of the first things that is noticeable is how light the bike feels and I don’t mean in just the physical sense – it’s light holding on to the handlebars, easy to turn, very comfortable and easy to control in the air. This bike gives you confidence and lets you ride fast without giving it a thought.

The rear suspension is great. If the light feel and easy turning comes from the new linkage and swingarm position then Kawasaki have got this right because out of deep soft turns, ruts, whoops, braking bumps and jumps the back end was as smooth as silk through each of these elements, definitely using the whole stroke without bottoming.

The forks were similar to most standard fork settings although I did feel that the initial part of the compression stroke was softer than most which is a nice surprise. Usually standard forks are so harsh and stiff over the braking bumps. The rest of the stroke felt plush and, like the rear, there was no bottoming.

The bike’s suspension and handling inspire confidence and trust in the KXF when riding the wheels off it. It’s predictable which on the one hand allows you to relax and feel safe while riding as fast as you can but on the other it loses a sharpness when turning which very slightly takes away the shine from it feeling so light.

Stopping the bike is easy. The front brake has a strong, positive and powerful feel and slowed the bike down quickly and the rear brake works great with a new compound for the rear pads.

I totally love the motor on this bike. The KXF revs up quickly and is responsive however, having said that, the bottom-end could be stronger. I grew up on two-strokes and loved thrashing the motor at the top-end and then spent the rest of my time riding 450 four-strokes using the strong torque of the motor without going anywhere near the rev limiter. The KX250F is built to rev and it’s fast.

From the mid-range the bike lights up and rips into the top-end rev range very quickly and still maintains power in the over rev – this makes the bike a lot of fun to ride and it’s no wonder the big-end bearings have been given a little extra support! There were a number of times where I could leave the bike in the same gear rather than changing up and there was no immediate dip in power, perfect for entering those turns when you want to leave the throttle on that little bit longer to get you into the turn.

The track was quite heavy going and I found that I was changing gear often as the motor reached the rev limiter regularly so I guess for better conditions this bike would pull taller gearing easily.

Overall the 2010 KX250F is a great package that’s worth investing in. While I thought the turning was only okay in the given conditions, the handling and suspension was superb, the motor’s awesome and the bike is a lot of fun to ride.