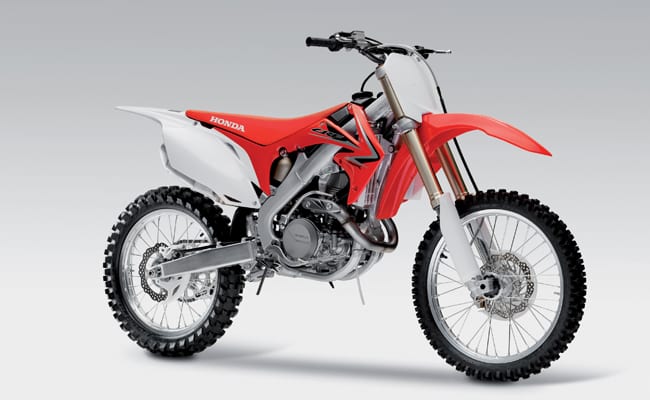 The CRF450 is going to feel like an anticlimax after all that. Not because it’s a right wrong ’un, just because there isn’t really much to say about it as the changes are minimal.

Like I said, opinion was divided on the ’09 model. I was one of those that rated it – I love the lower centre of gravity and found the power very favourable, just because it was really smooth. Many criticised the lack of a punch that the CRF450 was once renowned for but I’m still a believer that a 450 for the average racer is still more than enough for any man (or woman). It’s no wonder there were rumours of Cairoli riding a 400cc and now KTM working on a 350cc.

The 2010 CRF450 hasn’t had the major weight loss or make-over of the 250, what it’s had though is a little spruce up. The radical new image of last year was all a bit rock star and blinging, now it’s like it’s had a haircut, a shave and is a bit more of a formal dresser. Honda have ironed out the little problems and that’s made it sharper. There’s new fuel injection settings and the response is a tad crisper for it.

The front forks now feel slightly stiffer due to the oil levels and sit higher in the stroke which gives the bike a much better balance. Gone is that feeling that the front is diving too much and the rear is too high and that makes it much more stable and gives the rider more confidence, especially entering the turns at speed on sharp-edged braking bumps. The rear shock is better too and is much more stable on those nasty little bumps that form in ruts when powering out of corners.

The motor, well, that’s like for like on the 2009 model so if you felt it needed more brute grunt this year your wish hasn’t been answered. However, what you’ve still got is a smooth, rider-friendly bike that won’t pull on your arms like a toddler in a sweet shop. There’s now only one coupler for the fuel injection tool which eliminates the need to remove the fuel tank and the air filter now has two attachment tabs for secure installation.

As with both bikes the brakes are that Honda quality – strong and with a smooth, non-biting feel. Other than upgrading to the technology that’s on the factory bikes the only other option is to run larger discs and hoses but to be fair these brakes are plenty good enough for any club racer. I guess there is always that enjoyment of upgrading on your bike though!

After riding these two bikes I can safely say that although Honda may not have won a world or AMA championship for a while they’re still at the top of their game. Here are two solid motorcycles that cater for a wide spectrum of rider ability and you just know they’re always going to be durable and reliable – and when it’s your own cash you’re parting with that’s a got to be a winner hasn’t it?