Home News Motocross Zach Osborne back on the podium at Anaheim 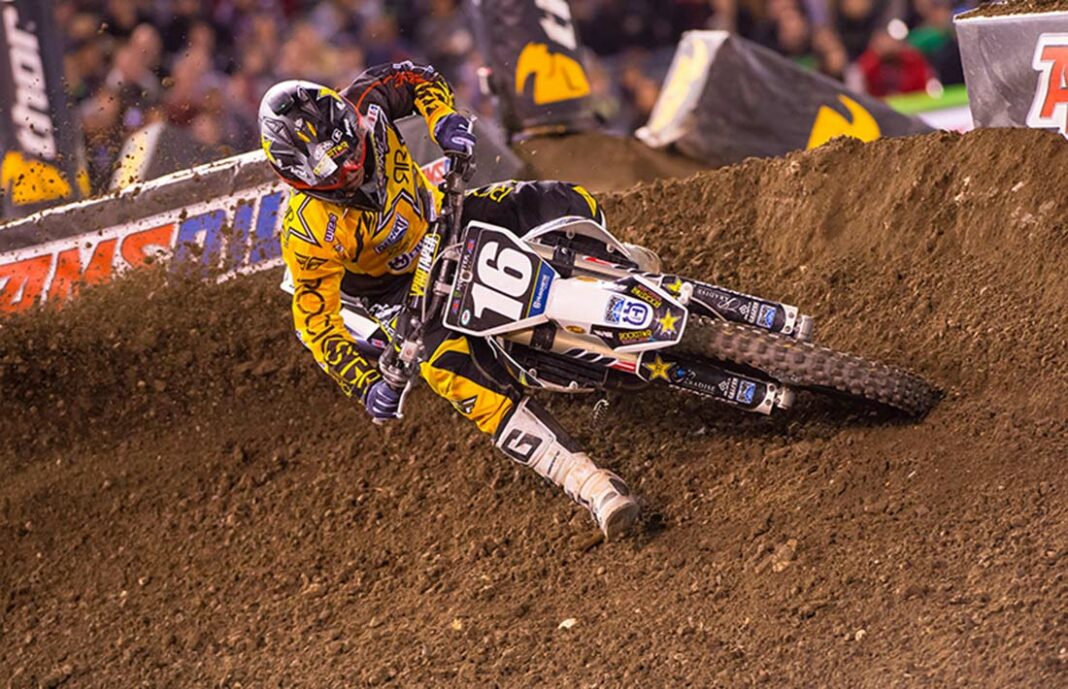 The Rockstar Energy Husqvarna Factory Racing team raced at Anaheim for the final time this year on Saturday, for the third round of the 2015 AMA Supercross series. Zach Osborne, the team’s only 250SX West rider, earned his second podium finish of the season, while Jason Anderson and Christophe Pourcel finished fifth and 12th, respectively, in 450SX.

After a red flag and a restart due to a gate malfunction in the first 250SX West heat, Zach Osborne, the fastest qualifier in the class, got a mid-pack start and was on the gas quickly.

He navigated his Husqvarna FC 250 into third by beginning of the second lap, and was closing in on second by the end. He fought for position for the rest of the race and eventually settled in to a third-place finish.

In the main, Osborne started fifth and soon made the pass for third where he was immediately hunted for the position by the former champ, Cooper Webb.

Osborne put up a fight for the next few laps, but eventually conceded the position before moving back into third after another rider went down around the halfway mark.

Second place was soon in sight with six laps to go. Osborne soon got in the mix and applied some serious pressure before making the pass for second right before the whoops with four laps to go. He held the position to finish second, his second podium finish so far this season. He is currently second overall in 250SX West rider point standings.

“I ended up getting a podium with a second-place finish and also pulled the pole position so it was a really good day,” said Osborne.

“I rode a little tight tonight but it’s still a solid result considering I threw a second place away last week with a lap and a half to go. It was a solid and consistent ride. I saw the battle in front of me and knew it was going to tighten up quick. I got to the back of them and there was a three-second space, then all of a sudden I was right on them like three or four corners later.

“I didn’t attack quick enough to give myself a shot at anything but we’ll come out swinging next week in Oakland.”

Jason Anderson got a taste of victory at Anaheim 1, and he returned to the historic supercross venue with the hopes of reliving that moment. After finishing sixth in his heat, Anderson lined up for his semi knowing he had to make quick work of transferring so he could focus on the task at hand in the main.

He pulled a top-three start in the semi and makes smooth passes to bring his Husqvarna FC 450 into the lead by the end of the first lap before taking the win. Anderson started mid-pack in the main and slowly but surely made his way through the field before being able to close in on the top five by the halfway point. He eventually made the pass for fifth with nine laps to go and held strong to the finish.

“I got fifth, which is nothing to be bummed about,” said Anderson. “It’s not the greatest, but it’s not the worst. I still pulled through, and now need to focus on coming back next week and getting on the podium again. There seemed to be a lot of lappers out there, and I think it’s because there’s a lot of guys that are currently out, so a majority of riders who usually don’t make the mains are sneaking in and it seems to be causing a lot of traffic.”

Christophe Pourcel earned his way to the main after finishing fifth in his heat and fifth in his semi. He started in the back of the pack in the main and spent the remainder of the race fighting for position. He eventually finished 12th, and is currently 12th overall in 450SX rider point standings.

“I have the speed and I feel comfortable,” said Pourcel. “It feels good to go fast and be out there with all those guys. I just have to bring the speed from practice into the night show. Tonight was pretty good. I almost qualified through the heat. I was a little stuck with the big set of whoops. I was fast in them in the morning, but they changed them for the night. It was a little sketchy, and I was losing too much speed in them. I ended up 12th, which is still progress from last week. I just have to keep charging. It’s good. I’m just doing my thing.”