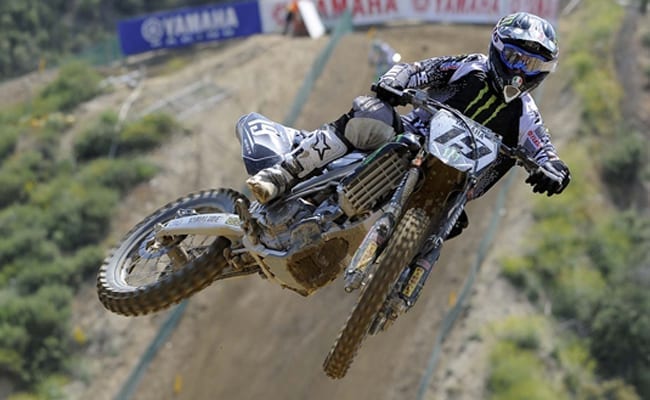 Monster Energy Yamaha saw two of their riders classify in the top 10 of the MX1 GP standings at a windy and changeable Glen Helen for the Monster Energy US GP and the third round of 15 in the FIM MX world championship.

David Philippaerts was able to score sixth position overall on the factory YZ450FM while Anthony Boissiere marked a career-best MX1 finish with ninth. Series leader coming across the Atlantic, Steven Frossard suffered crashes in both races and was 18th.

The Californian circuit had undergone some changes for 2011 and the second edition of the American event this century. New corners and an attempt to slow the average speed of the longest layout on the calendar mattered little with the heavy rainfall of Sunday morning. The mud was thick and slippery. Strong winds however managed to change the climate by the afternoon and the terrain was soon dry and bumpy.

The team had been testing the week before coming to the USA and were able to make some small modifications to the suspension. The extra work helped as the Glen Helen bumps were physically difficult and required the riders to take risks to maintain a fierce pace.

Former world champion Philippaerts was restricted by two poor getaways from the gate. The Italian enacted one of his usual hard-charges to reach fifth in the first moto but faced a harder task across the ripples of the track in the second and crossed the line in ninth.

Boissiere ripped along the start-straight in the opening moto to seize the holeshot and then fought among the top 10 to earn a well-placed seventh. In the second race the Frenchman was 12th and ended the day content with his best effort yet since climbing on the YZ450FM.

Steven Frossard was not able to keep the red plate he earned at round two in Holland. The French rookie was set for seventh in the first affair after a lacklustre start until a mistake on the last lap dropped him three more positions to 10th. A collision with Antonio Cairoli on the first lap of moto two meant another trawl through the pack and Frossard was looking towards a top 15 slot until another slip and a damaged motorcycle ended his race in the closing stages.

Frossard and Philippaerts are now fourth and fifth in the standings and split by five points. Frossard trails Clement Desalle by 32. Boissiere is 13th.
Monster Energy Yamaha will now remain outside Europe and travel south to Indaiatuba, north of Sao Paolo, for the Grand Prix of Brazil and round four of the FIM world championship next week.

David Philippaerts:
“This was a better race for me here than last year but we had some trouble with the starts today. I pushed really hard in both motos and I had a bit more luck in the first race but was really far behind at the beginning of the second. The results I took today are not the ones I want but this was the best I could do here. The track was difficult with many jumps and bumps, even dangerous in some places. I hope for better next week.”

Steven Frossard:
“It wasn’t my weekend. In the first heat I had a bad start and I didn’t have a good feeling. I tried to come back and reached seventh but then made a mistake on the last lap and crashed. In the second heat I couldn’t improve the start and when Cairoli made a mistake I landed on him and we both fell. I pushed really hard to recover, perhaps too much because I crashed again and the handlebar was destroyed. I then looked to take some points but it was not possible.”

Anthony Boissiere:
“I am very happy today with my first overall top 10 finish. In the first race I made the holeshot which was perfect and then took seventh which is my best MX1 result so far. The second moto start was not great but I came back to 12th and that was okay. The bike was awesome and to feel that power on the start straight was crazy! We are all motivated for good results.”