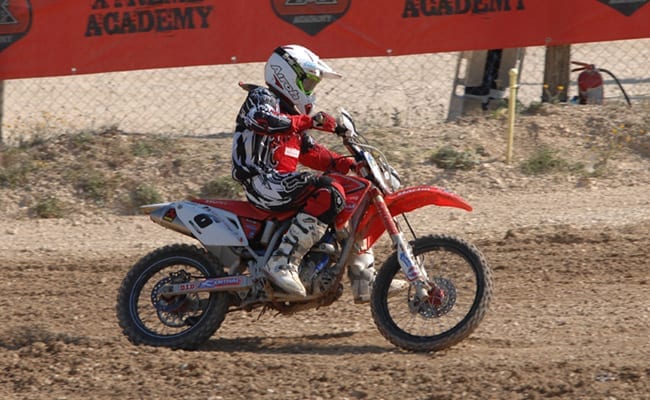 Honda Motor Europe is pleased to announce that Ireland will be hosting an Xtreme Academy championship in 2011 in conjunction with the Southern Centre Championship.

The Xtreme Academy, which was launched last year, has been expanding throughout Europe and is exclusive to youngsters contesting the CRF150R nationally. The championship, which runs alongside the national series in each country, now extends onto Irish shores with racers battling it out for an special prize fund, recognition as a Honda rider and much, much more.

Based on at least four riders racing the four-stroke Honda machinery in the big wheel class for the three round Southern Centre Championship, the prize fund offers the chance to win an amazing 1,500 Euros to spend at a local dealer along with cool prizes from sponsors One Industries, Airoh, Polisport, No-Toil, Vans, Renthal and Racebikebitz.
The lead Honda rider at each event will also receive a special award and all racers will enjoy recognition on the Honda Pro Racing website as well as maybe also receiving expert tuition from Xtreme Academy trainer, Brian Jorgensen.

The Xtreme Academy has now branched out into seven countries across Europe and offers a learning environment for the stars of tomorrow to hone their skills as motocross racers. With a substantial prize fund on offer, peer mentoring and support from former GP winner Jorgensen, it’s a special initiative demonstrating Honda’s commitment to helping youngsters develop as racers. The Irish Xtreme Academy championship kicks off on June 4 at South East, Ferns.
For more information about the Honda Xtreme Academy please log onto the www.hondaproracing.com/xtreme-academy/ website. Riders wishing to contest the Irish series aboard a CRF150R and sign up for the Xtreme Academy should contact the Southern Centre.