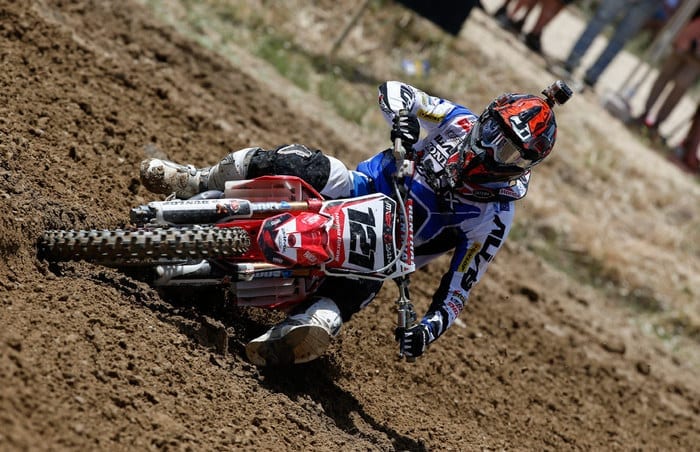 Xavier Boog suffered fractures to his back and neck at the French GP, sidelining the 24MX Honda rider for the second half of the 2014 MXGP season. Thankfully the double French champion and former MXoN team member received great news this Wednesday when his doctor gave him the green light to start riding again.

Catching up with the likable Frenchman, we wanted to know what the pilot had gone through since the MXGP of France and how he felt now that he had been cleared to ride again…

DBR: How do you feel now?

Xavier Boog: “I feel relieved! I’m really happy to get on the bike again… (laughs). And to be honest it was about time because I think I was driving my fiancée Charlotte crazy. Being at home for some time is okay, but I was getting impatient and it made me realize even more how much I missed riding and racing. It’s now little over three months since the crash and the rehab has been going pretty good. Everything went more or less according to plan, the doctors and physiotherapists who helped me have been great. The support and encouragement from my family, friends, my manager Jeremy, 24MX Honda and other partners meant a lot as well.”

DBR: You’ve already been training physically for a while.

Xavier Boog: “That’s correct. Especially the last couple of weeks I stepped up the training volume. We went to the French Alps for a bit of holiday but I was able to get in some great training at the same time. I have almost regained full strength in my legs. It’s just my upper body that needs to get a bit stronger. After a tough day I feel some stiffness and some aches in my neck and back but that’s absolutely normal. Your body needs to get used to the work after a period of inactivity and less pressure.”

DBR: What do you think about the season you had until the crash?

Xavier Boog: “It’s tough because I started of slowly. The first moto in Qatar kind of told it all. I got a great start and took the lead right after the holeshot line but I was not able to develop the pace that I wanted to and I dropped back way too quickly. We didn’t have a lot of pre-season racing and to be honest it took me some time to get used to the suspension. The more we tested, the better the feeling was and the more comfortable I was on the bike. My results were improving as well; a win in the French championship after the first two overseas races. Then I got eighth in Trentino, seventh in Bulgaria, another holeshot and 6th overall in Spain. Unfortunately I was ill in Matterley Basin and we all know what happened in Saint-Jean d’Angély!”

DBR: But you showed good speed there in the first moto and at the start of the second moto.

Xavier Boog: “Yes, I deed feel that I had the momentum on my side and that I was getting closer to the top five. It’s frustrating that a small mistake can have such big consequences but that’s part of the game! At that point in the season everything was going well. My feeling on the Honda, the relationship with the team… everything was perfect.”

DBR: In regards to the musical chairs for the 2015 season, the timing of your crash could not have come worse.

Xavier Boog: “For sure it does not help to be injured at a critical time like that. I have some offers for next year on the table, also in enduro but I still feel that I have things to prove in motocross. Normally I should know more about my future in short notice. One thing is already clear; I won’t stay with 24MX Honda. It’s sad because we both would have liked to continue, but after all these years at the highest level I know that everything comes down to results. My 2012 season was strong, both last season and this season were overshadowed by injuries. It’s that simple. I don’t think age has got anything to with it. I know I can still be up there with the fastest guys in MXGP. However the deal needs to be right as well.”

DBR: From the outside it might look that younger riders push the more experienced guys out. Do you agree?

Xavier Boog: “Not really. As a rider everybody has their strengths and weaknesses. That’s the starting point, but like I said when all is said and done the results do the talking. I think it’s great for the level in MXGP if fast young guys come up from MX2. I can’t blame them, that’s where I was four years ago! In 2010 I was the rookie of the year and I immediately came seventh overall. On the other hand riders like David Philippaerts, Ken De Dycker, Antonio Cairoli and Kevin Strijbos are all close to 30 and still going strong… So there’s definitely hope for me!”

DBR: Did you follow the GPs the last few months?

Xavier Boog: “When I was just at home it was really tough. Not to be there, being injured and just watching the races on TV seems to make the pain even harder! But after a while it started to come back. Still you can’t help to think: I like that track, under these circumstances I might have done this or that!”

DBR: Most races left on the 2015 calendar go indoor now. Any chances of seeing you return to more supercross races? We remember you winning Marseille and Strasbourg SX and like many French riders you rode Supercross in the junior classes.

Xavier Boog: “I would love to, I still like supercross actually! Although for now I’m not sure when my first race will be. There’s no hurry and of course I need to rebuild my rhythm first as well.”

DBR: We can’t wait to see you back on track.

Xavier Boog: “Me neither, it’s good to be back!”