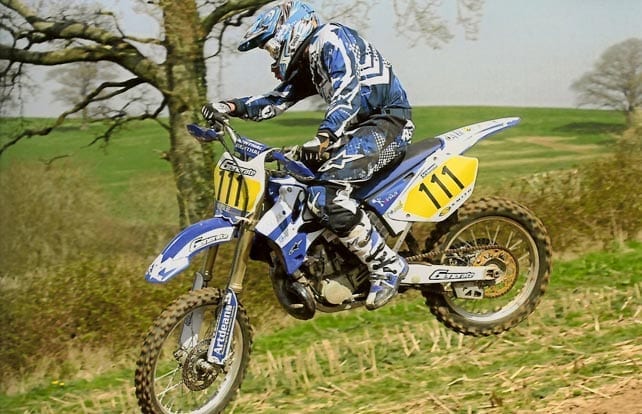 Weymouth MX rider to take on the Americans & the World in record attempt!

A Weymouth based former youth MX rider is taking on the Americans in a World record attempt this September. Paul Oughton is attempting to beat the Guinness World record, set by American Perry Prichard in 2010, for the “Greatest Distance on a motocross bike in 24 hours”. In doing so Paul is raising money for the Dorchester based Weldmar Hospice, and the Spinal Cord research charity Wings for Life.

The attempt will be taking place over the two days of September 10 & 11 at the Rogershill Raceway Motocross circuit near Bere Regis. Other events will be planned around and during the attempt for the public to get involved in.

Oughton is an all round off road motorcyclist winning club titles as a Youth Motocross racer, before moving into Grasstrack, and then Speedway where he was capped by England Under 21. In recent years he has been taking part in Enduro events, but is taking the endurance to the extreme in this attempt. He will need to ride for almost 24 hours non stop with the only breaks being for refuelling of both bike and body.

Paul told us why he is attempting this record “I have always wanted to break a World record, and I have always wanted to push myself in terms of endurance to achieve it, and what better way to do it than spend 24 hours on a motocross bike. There is nothing I enjoy more than the solitude and oneness you get when riding a motorbike. I am working hard on my fitness right now and have lots of riding to do in preparation but I am enjoying the challenge and I am determined to break the record”

Of the charities Paul is supporting he said “As part of my work in the past I have always worked with many charities, and is something I want to continue, and do more of. The Weldmar Hospice is close to mine and many other local people’s hearts and one which I am proud to represent and raise funds for.

“Wings for Life are another charity that is relevant to me and many other people within motorcycle sport. Having witnessed accidents where Spinal Cord injury has occurred and with friends having been sadly injured in this way I am keen to do my part and support them and the charity through the record attempt”.

It’s more than a World record attempt with lots of fun and entertainment. There will be live bands and entertainment taking place at the track on the evening of the attempt, and a big screen showing Paul’s progress at the same time.

Paul said “There is lots of planning involved in this attempt as, on top of the riding, I want to make it a special event for everyone to be part of. There has been great support from many people already and would appreciate any help in achieving this goal.

“This could be anything from donations to the charities or in other ways to help achieve the goal, be it with tyres, fuel, track lighting or time from supporters – any support will be greatly appreciated.

“This is going to be a real team effort and I want everyone who supports the attempt in anyway to feel part of it and to enjoy what hopefully will be a great achievement.”

Paul hasn’t been on his own – support from family and friends have been crucial in the build up to the World record attempt.

Paul said “I would like to thank my family for their support and confidence they have shown in me already and a big thank you for the team at Rogershill Raceway who have been tremendous in offering me the track, but also in their full support and help in this record attempt so far”.

If you would like to find out more about being part of the event or supporting it call 07917 117007 or email info@24hoursofmx.com

We’ll keep DBR readers updated on the progress of the World record and Paul’s worth charity work.