Home News Motocross Why Brad Anderson may have to give up the EMX300 red plate... 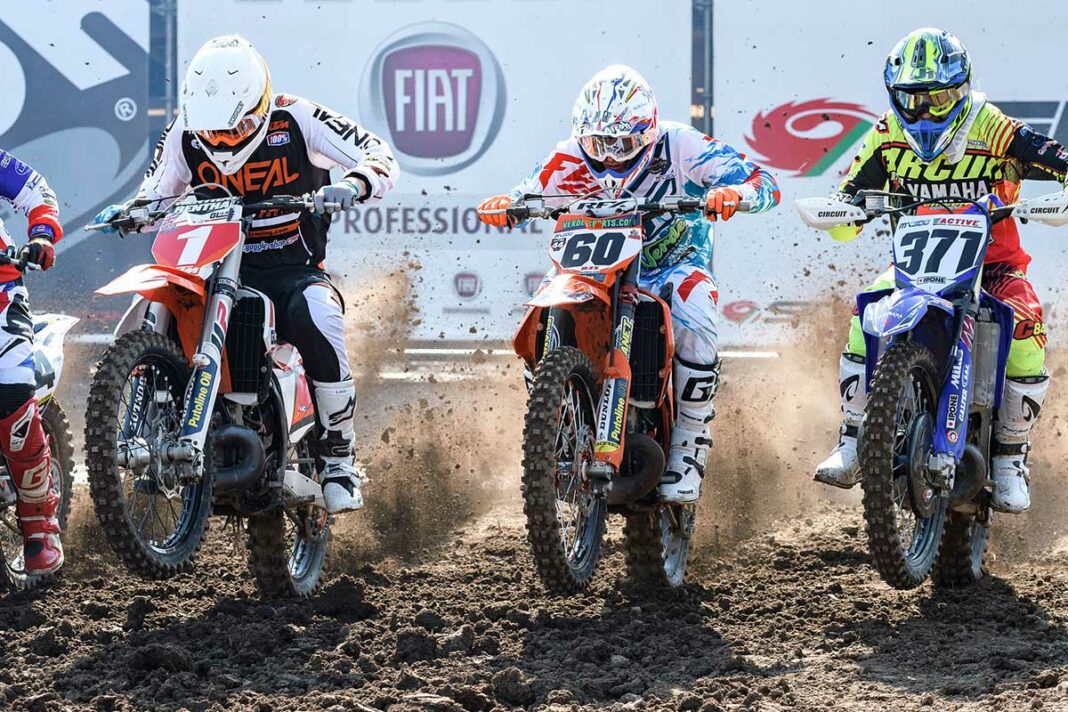 DBR sat down with Verde KTM’s Brad Anderson in Teutschenthal at the first round of the EMX300 championship.

DBR: Brad, you’re racing in the EMX300 championship, why not do the British two-stroke championship?

Brad Anderson: I’m riding in MX1 and with only four rounds in the two-stroke my main goal is to do well in MX1 this year. It may change next year if it goes to eight rounds or if it goes to MX2 (riding a two-stroke in MX2 class) I might consider it. I like the two-stroke, they’re more fun than 450s, a bit lighter and not as much power. I just wanted to give it one more push and I was doing quite well in MX1 so I’m just getting my head down and concentrate with that.

DBR: The 450 and two-stroke have different characteristics and require different riding technique. Is it hard to jump between the two?

BA: It’s a lot easier going from the 450 to the two-stroke because it’s a lot lighter, not as much power, they turn easier so you can put it where you want to compared to the 450 which is heavier and harder to handle.

DBR: You raced in the EMX250 class in Valkenswaard on the two-stroke and had two strong rides but were penalised after the noise test. Can you tell us about that weekend?

BA: We just thought we’d have a blast as we had a spare weekend. To be fair I thought I would do better than I did, that group is pretty tough and especially at Valkenswaard. All the kids there go really well in the sand so we knew it would be tough. I didn’t get the best starts, I got boxed in on the second one and came through to eighth I think then got noise tested after the race. I think it was their first time testing two-strokes and we had a short tail pipe. I think it was a bit of a learning curve for them but obviously, I came out worst, they revved my bike to the limit but only blipped Kras’ bike. It’s just one of those things but we’ve changed to a longer tailpipe this weekend.

DBR: There were a few conspiracy theories about two-stroke in the EMX250 class but you think it was just one of those things?

BA: I think the environment bloke was in Valkenswaard and they were having issues all day with noise and I was the unlucky one that picked out, but there was another guy docked as well. That race was only for practice so I’m glad we went.

DBR: What was the metal start grid like for the two-stroke?

BA: It’s a lot better. You don’t have to prepare it and it’s the fair for everyone. You don’t get any spin, it’s dead grippy. I think it’s what we need to look at for British championships, see what ideas we can take out of GPs for Britain to keep improving.

DBR: There’s a lot of debate at the moment about the British championships and the lack of GP riders, obviously made worse by Tommy [Searle] and Jake [Nicholls] being injured and other racing abroad. What can they do to get GP riders and keep top riders like you involved?

BA: To be fair there’s not that many that could ride. Like you say, Tommy and Jake are injured, Shaun Simpson is injured but contracted overseas, so is Conrad Mewse. There’s not much you can do to attract more. To be honest, the riders who are in the British, it’s a tough class. It’s the toughest it’s been, anyone in the top five or six can win and they’re all going for it and it’s dog eat dog, we all want it bad this year cos we all know it’s up for grabs.

DBR: The next round of EMX300 is in Russia, which is proving to be controversial. Will you be going?

BA: Definitely not! They were making a list when I was signing on of who’s going and if not many are going they might cancel it. I said to them it’s a bit unfair on the English because we can’t get sports visas to go, and one of them said you can get a tourist visa. I said that doesn’t really help us because if they find out I’ve been riding on a tourist visa or I get hurt on my insurance then they’ll lock me up. That’s another thing I don’t think they’ve thought about. Russia’s not in Europe anyway so I don’t know how they can call it a European championship if they’re running outside Europe but it’s just one of those things, it would be a shame if I do well here then can’t go if they do run it because I couldn’t win the championship then.

DBR: The track today looks in good condition considering all the rain last night and they’ve changed the schedule so you’re out later, what’s your thoughts for the weekend and the conditions today?

BA: Yesterday was really hot then about 7 o’clock we had a typhoon that was blowing away easy-ups, but they seem to be working on the track and moved the schedule to give them time to do more. It’s better that we’re on after MXGP cos the lines will be in otherwise it would just be flat and flat out, so to go out after MXGP will suit me better, we’re used to going out second at the British championship when it’s a bit bumpier and there are some lines.