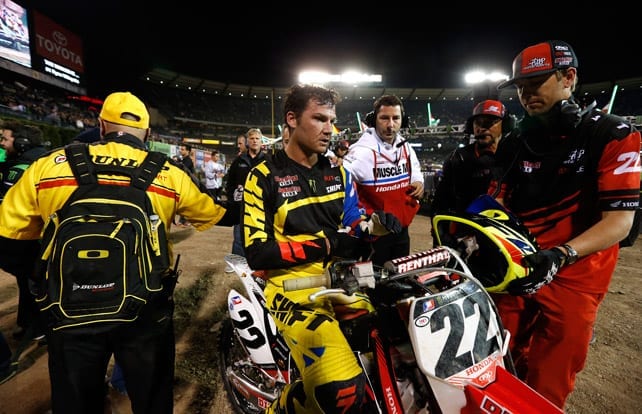 Why speedy Reedy’s not on the pace…

Reed recovered for third place at round three in Anaheim, and then in Oakland he was competitive throughout practice but was part of a turn-two pileup that ruined that main event.

Anaheim III and San Diego brought Reed fifth place and then at Arlington he moved up a place before Atlanta went a little south coming in ninth.

It went a lot smoother at St. Louis with his first podium finish since Anaheim II. Reed and Bubba were quick out of the start, trading places during the early part of the race. The constantly improving Villopoto blasted through the field for the win and Reed finished third.

Daytona was a though test for all the riders with a gnarly rutted, sandy track and a familiar – just missed the podium – fifth was a good result for the veteran pilot.

“Yeah, I mean, the effort is there and the want is there but the comfort hasn’t been there,” Reed said. “So it’s not like I’ve been rolling over and trying to just ride it out. I’m trying to do what I can do with what I’ve got to work with.”

Chad Reed is long way back in the points but he’s not likely to give up and that’s dangerous for the lead riders as he looks to steal valuable Championship points.