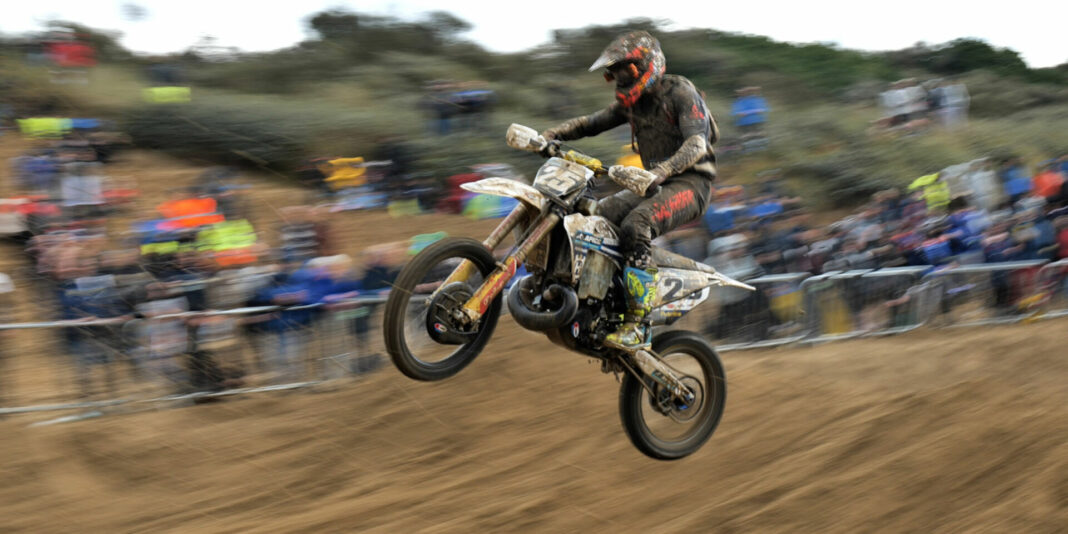 Apico Husqvarna had their last official race of the season at the annual 38th Weston Beach Race down on the Somerset coast, this weekend, with some top ten finishes.

This would mark the teams fifth year competing at the event and Apico’s sixth year attending and raising money for charity. As the season finale, the weather was not going to put a dampener on the spirits and the last outing in 2021.

Apico Factory Racing had the Apico Hydration Station down on the promenade in conjunction with Ice Valley, where people could donate to Air Ambulance UK in memory of Jude Morris. The team setup certainly looked factory on the day with four awnings incorporating the Hydration Station and displaying the Husqvarna machinery of Stuart Edmonds on the FC450, Matt Burrows switching to the FC350 and Jamie Law on his TC250.

All the bikes were prepped with the usual beach race must-haves including oversized fuel tanks, O-ring chains, steel sprockets, filter and radiator covers to name a few of the products that help to finish one of the toughest endurance races the UK has to offer.

“After a different start, where we had to run to our bikes, I managed to get down to the gates inside the first 20 riders,’ said Jamie Law.

“I fell at the first dune after getting caught in an early pile up. It felt like there were hundreds of riders in front of me at the end of the straight. I pushed on and cleared the larger dunes, then coming back through the smaller dunes I got a bit impatient and took a fresh line that buried the bike and it took more time and energy to get it out than I would have spent by waiting.”

“Just in case that was a fluke, I made the same mistake again on the next lap! I settled into the race by lap four finding my flow and getting my head down to make up positions to finish seventh at the line. I was happy enough with the result after not feeling 100% leading up to the event. That said, with the mistakes I made during the race it could have been a lot worse. I’d like to thank all of the team and my family along with my sponsors for another great season.”

Team rider Matt Burrows also explained, “I’ve never known a Weston like it, I made a mistake at the first dune and fell off before getting straight back on and getting down the straight in the first 50-100 riders, the place was like a war zone!”

“Jamie was stuck on the first lap and I went past him and then caught and passed my brother down the straight on the second lap to get into the top 35 riders. From this point, I made up positions and by lap six I was settled into the top ten.”

“I’ve ridden a few Weston Beach Races and I’ve never known the weather to be as unpredictable and rain as heavy. I took my first pitstop of two at the 1.20hr mark. I pitted again whilst in sixth place with 38 minutes to go and had to change my goggles and refuel my bike as my pit crew had abandoned me!”

“I’d also used all of the material on my front brakes and had to push the piston open and not use it. This is when Jamie caught and passed me along with another rider and I managed to finish eighth overall.”

Stuart Edmonds also said “I’d managed to get well placed out of parc fermé and clear the first dune for fifth down the start straight. I went through the big dunes without issues and it was when I hit the small corner dune I was caught out and lost some time.”

“I managed to get into my flow again on lap two, though it was when I came down one of the larger dunes I hit a bike in front, falling off and someone ran over my leg. The first couple of laps were absolute carnage. I got into a rhythm and started to make positions before pitting on the hour inside the top ten.”

“That didn’t go to plan initially as I couldn’t find my pit crew! The second hour was hard with a couple of crashes, I managed to catch up with Carlton Husband and then crashed again. At the two hr point, I’d managed to pass my teammate Matt, though then lost the position after another big crash. I then managed to ride out the rest of the race sore and with a battered bike finishing ninth at the flag. I’d like to thank all my sponsors and the team for their help in preparing for this insane event.”