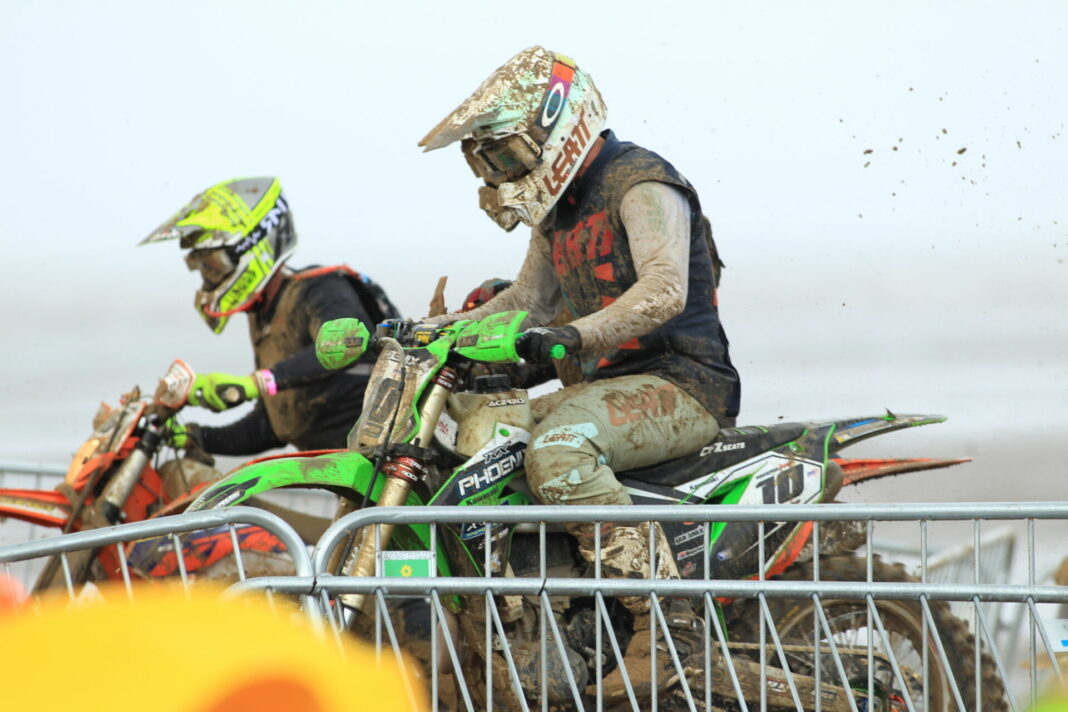 The pairing were both looking to round off the season in fine style as they heading to the North Somerset seaside town. For Carlton, this was to be his third time competing in the event after finishing in tenth place at the last running of the event back in 2019, but for Jason, it was his first time contesting the Weston Beach Race.

With wet weather forecast for most of the weekend, the main race on Sunday started with dry weather but the rain showers started soon after. As seeded riders both Carlton and Jason started at the front and made good progress on the first half of the opening lap before the pair found themselves stuck on the same section of track.

After they managed to get going again, they crossed the line at the end of the first lap outside the top 50. Jason opted to quickly pit for fresh goggles, while Carlton continued.

Following the quick pit stop Jason returned out on track, but unfortunately suffered a mechanical issue with the bike on the main straight and was forced to retire from the race.

With just Carlton left on the track, all the focus was on him to see how he progressed. During the opening laps, Carlton was able to recover well and push forward and get towards the top 20 after a few laps.

By the mid-race point, Carlton had worked his way into the top 10 and was still pushing forward and passing riders and during the final hour, Carlton moved into 6th place before the finish to claim his best result at the event so far.

“The race went well for me, I started at the front and was going well on the first lap,’ explained Husband. “But then unfortunately I got stuck on the first lap with Jason and we were stuck for a good four to five minutes, and it just felt like forever.”

“I managed to recover for around 50th on the first lap and push forward during the race, passing riders and although I had a few small mistakes, there was nothing major and I managed to get back to sixth at the finish. I’m happy with the result and want to thank the team for everything this weekend and my Mum and Dad for coming down and helping in the pits and it’s just been a great weekend.”

“Not a lot to say really, the first lap was an experience to say the least,’ Said Meara when asked about his day. “I got away decent running around eighth early but managed to get stuck near the end of lap one and it took a bit off time to get out and going again.”

“I crossed the line in around 50th and pulled into change to a fresh set off goggles ready to get the head down and try pull through to the top five. But unfortunately, a mechanical issue at the beginning of lap two finished my race extremely early. I have enjoyed the experience and hope to get the chance to try and finish it next year and a massive Thanks to Barry for giving me the opportunity to race.”

Team Owner Barry Moore said, “The weather certainly made for an interesting race on Sunday although we definitely had the better conditions compared to Saturday’s racing.”

“I’m really disappointed for Jason after travelling over from Ireland to compete in his first Weston Beach race, we think a possible electrical fault on only lap two put an early end to his first experience but he enjoyed the weekend and is looking forward to better luck next year.”

“Carlton on his third consecutive outing had a brilliant sixth at the flag, to be honest, I thought he’d blown the chance of a top ten after getting stuck on lap one and coming through outside the top 50 and a long way down on the front group, but he rode unreal, and I’m really pleased for him.”

“It was a great weekend away with the team and looking forward to starting work in readiness for the 2022 season.”