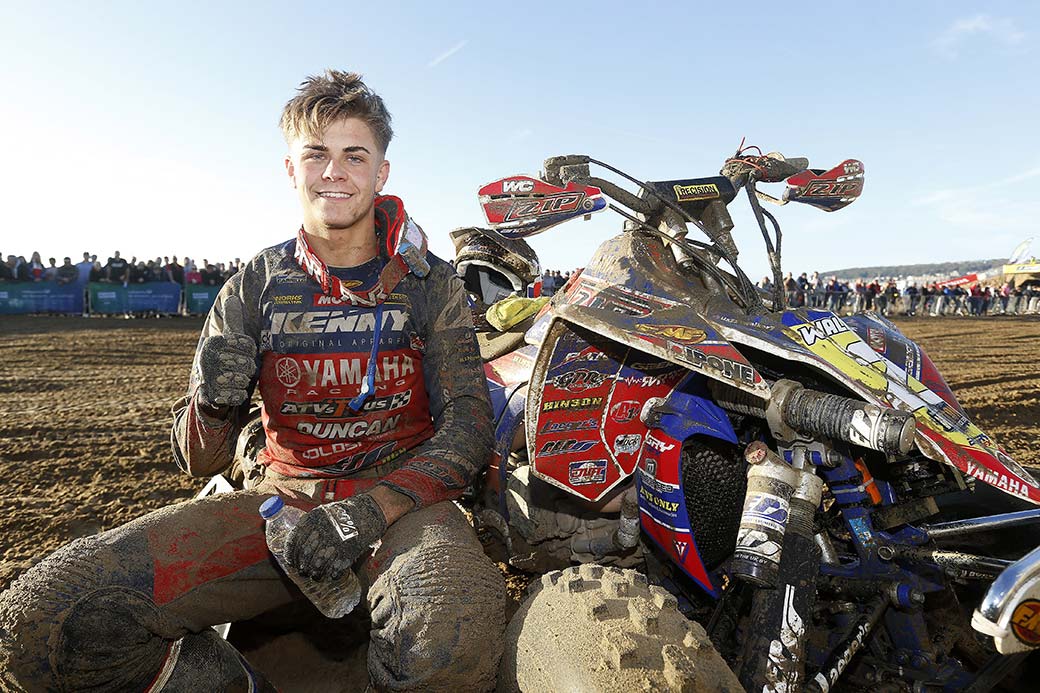 The racing action at the HydroGarden Weston Beach Race Powered by KTM kicked off Saturday with the Youth 65cc, 125/250F classes and the Quadzilla quad and Sidecar race where Graham Haddow, Rossi Beard, Harry Walker and Davies/Fergusion took the overall victories in front of a bumper crowd.

Attacking the mammoth dunes first was the 65cc class for riders aged six and above, where Billy Askew took an early and dominant lead for the first half of the race. Unfortunately, Askew, who rides for the Judd Orange Brigade, had issues in the challenging sand and was forced to retire.

Graham Haddow was positioned perfectly in the top three to take advantage of Askew’s misfortune and he led from lap eight of the 1hr 15-minute race to clinch the win. Alfie Davies was second and Ollie Bubb was third.

In the 125cc Youth race Sam Nunn took his fifth win from six starts here at Weston, although it wasn’t without pressure. Nunn, who was closely chased by Sam Price, took an early lead and maintained his advantage until the chequered flag aboard his Yamaha machine. Price clinched second, and Aaron Colley took third place.

In the 250F Youth class Rossi Beard rode a near-perfect race, despite it only being his first attempt here in the difficult terrain. Jaydon Murphy took an early lead, but Beard was close behind and the duo battled for the opening laps of the hour and a half long race.

Beard reigned supreme and kept his momentum to hold off a hard-charging Josh Greedy, despite some issues during his pit-stop, to take the victory at the finish line. Last year’s winner Greedy recovered from seventh on the second lap to second place at the chequered flag, with Aaron Patstone climbing his way through the order to take the final podium position in third.

The final race of the day, a three-hour battle of man and machine, was the Quadzilla Quad race where hundreds of riders thundered down the 2.5km start straight into the first turn. 2016 and ’17 winner Stefan Murphy had the holeshot, but 4×4 rider Steve Atkins took the lead halfway around the first lap.

Murphy was under intense pressure in the early stages from eventual winner Harry Walker, in a race where smooth fuel stops were crucial.

Murphy, Walker and Carl Bunce were locked in battle throughout the race, with Walker holding the lead during the mid-way point of the race. Murphy briefly re-took first in the last half-hour of the race, but Walker was on a mission and brought home the win with Bunce in second and Murphy third.

In the Sidecar category Davies/Ferguson took another popular victory with Williams/Peters second and Scrivens/Lawford in third place. In the 4×4 class Atkins took his fourth win and a superb fourth overall with Simon David second and Graham Guy third.

In the two-man quad class the Kellett/Kellett duo had the early lead, but they suffered from a fuel issue, demoting them to 40th overall. Henson/Clowes took the victory, with David Knight and his nephew second, whilst last year’s winners Kerruish/Thorpe took third position.

With Saturday’s on-track action concluded, we look forward to another great day out with the exciting atmosphere here at Weston-Super-Mare. With good weather forecast and a full solo class of 1001 riders, it is expected to be a fantastic day out for all of the family.

Graham Haddow – 65cc Youth winner: “The track was definitely technical this year. I thought the track was hard last year, but this year really topped it. I just loved every single bit of it today. Having fun over the dunes and that straight is just unbelievable. Being right off the back of the bike, hanging off it is just amazing.

“I didn’t feel any pressure on me at all because I’ve done this before, but the best bit today was crossing that finish line in first.”

Sam Nunn – 125cc Youth winner: “It was a good race. I got off to an alright start. I stayed out of trouble, had a clean pit-stop and managed to win.

“It’s my sixth time here, and my fifth win. I won last year so it was great to come back and do the same again.

“The track was tougher than last year, with a combination of motocross and harder sections – it was good. I’m staying on the 125cc for next season, but I think this will be the last youth race at this event, so I’ll be taking on the main race next.”

Rossi Beard – 250F Youth winner: “I had a good start – I was battling for the lead to begin with and I got away. We had a little bit of trouble in the pits and Josh got by, then the closing stages were really intense but I’m really happy with the result.

“This is my first time racing here, and it was good. Josh came through close to the end, but I’m happy I could take the win and I hope to be back to race here again. The straight was fun, it’s been a good closing part of the season.

“I’ve got one more race next weekend in the Steve Benton Under 21 Championship, and hopefully we can wrap that up as well.”

Harry Walker – Quadzilla Quad race winner: “I was third or fourth going into the first corner and got up into second. Things were looking good, although I got stuck, unfortunately, which cost some time. I pushed after that and caught up to Stefan (Murphy) at the hour and a half mark.

Davies/Ferguson – Sidecar class winners: “We had a good start and had a good clear run. However, it wasn’t without issues, as pretty much from the start we didn’t have a back brake. We pulled away nicely. After we fuelled up the first time we had a problem with the start button – it was just dead, so that was a big worry and we had to bump-start it. We got it going and luckily we didn’t stall it from then on, otherwise, it would have been a different story.

“The track flowed nicely, and right from the go we could get around well. The extra length of the track made sense, and we’re just happy to take the win.”

Henson/Clowes – Two-man Quad class winners: “It wasn’t as technical as it has been previously, and not as wet but it was still hard today. The dunes were steeper, but maybe not as high as before, it’s been really good. We had no issues, we kept going, getting between everyone and we’re glad to be back on the top step of the podium again.

“We had a good start in the top 10, then midway through the race we were seventh overall, before taking 11th in the overall at the end. We found our lines, stuck to them, got in the flow and we’ve had a lot of fun.”

Steve Atkins – 4×4 quad winner: “The track was really good and I really enjoyed it, it flowed well. Apart from a back issue on the first lap, which is a bit of Weston, I managed to stand up and keep going, although I’m in a bit of pain now.

“The track didn’t really favour the 4x4s today, with less congestion and less gnarly stuff, but it was really good. The conditions were nice without too much water. I’m really happy to take the win in the 4×4 class.”