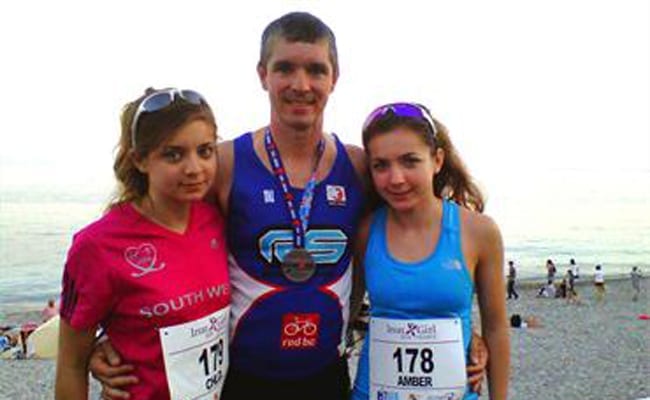 Race Spec boss and joint co-ordinator of the International Dirt Bike Show Dave Watson has completed a challenge that would test the mettle of a young motocross star, let alone one whose heyday was some 20-odd years ago. Watson, now 50, was a British 250cc MX champion and front-runner on the world MX circuit in the 1980s and last week he competed in Ironman France with a performance that defied his age and proved the racing spirit in him is still alive and well.

Ironman France was held in the scenic but blisteringly hot Southern city of Nice where 2,800 competitors lined up for the 2.2-mile sea swim followed by a mountainous 112-mile cycle and topped off with a gruelling 26.2-mile marathon run. The ‘Flying W’ finished the challenge in an impressive time of 14 hours, 17 minutes and 13 seconds with a finishing position of 1,733.

An elated but exhausted Dave, commenting on his achievement, said: “It was worth every minute but I’m not about to sign up for another one any time soon! The bike course was really tough, more like a Tour de France stage. Some of the downhill blind corner sections caught out many of the other riders with plenty of crashes going on. For me it was a case of reviving some of my old motocross skills. The marathon was punishing with the street pounding bringing some old racing injuries back to the fore. My knee and hip went fairly early on in the race, but I was determined to finish.”

Meanwhile, Dave’s two daughters – 17-year-old Amber and 21-year-old Chloe (pictured above with their dad) – continued the ‘fit family’ theme by taking part in an Irongirl 5k run. From an entry of 500 Amber finished second with a remarkable time of 18m54s, only 30 seconds behind the reigning French masters champion Leila Chaieb. Chloe clocked a time of 21m42s which meant the girls won the sisters’ class by a margin of four minutes.